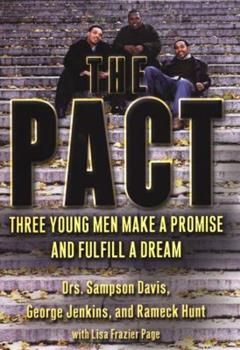 Filled with drama, courage, temptation, and, ultimately, triumph, The Pact is the uplifting story of three teenaged boys from broken homes in Newark, New Jersey, who pledged to support one another in realizing their dreams. Despite tremendous difficulties they faced, today two are doctors and one is a dentist.

All for one, and one for all

Published by Thriftbooks.com User , 16 years ago
What happens when three young African-American men from the projects in Newark, NJ make a pact to become doctors? With determination, discipline, perseverance, a little luck and Divine intervention, and each other's support, they become doctors. The Pact is the true story of three such young men, inspired by George Jenkins' dream of becoming a dentist. The doctors alternate telling their stories of living in mostly single parent homes in neighborhoods rife with crack heads and stray bullets. The three became friends at University High, a magnet school for gifted and talented students. Their senior year, a recruiter from Seton Hall's Pre-Medical/Pre-Dental Plus Program, part of an Equal Opportunity Program created to make higher education accessible for poor students, spoke and rekindled George's interest in dentistry. He convinced the others to apply to Seton Hall, attend college, and medical school together. Their pact, similar to the Three Musketeers "All for one, and one for all," enabled each to achieve more than they could have ever imagined. The Pact provides a powerful message of friendship's positive influence. The importance of friendship is the overall theme of these doctors' story. Each agrees that life would be very different had they not agreed to support each other. They also acknowledge the support of significant others-family members, teachers, counselors, even their n'er-do-well friends. The power of their pact, knowing that the others would be disappointed, or striving to keep up with each other is what kept them alive, or from becoming statistics in the NJ penal system. Their friendship didn't end at the conclusion of medical school, but continues today. They honor their accomplishments and the people and circumstances that enabled their success through the Three Doctors Foundation, a nonprofit organization that creates medical/health opportunities in inner-city communities. They also hope that their story will inspire others.

Published by Thriftbooks.com User , 17 years ago
This book was very informative. I really loved this book not only because they are from my hometown Newark, New Jersey. But it was an interesting novel. They came from the ghetto and turned out to be very distinguished gentlemen. I am so happy I read a sucess story from my hometown. I recommend this book to people that feel is though there is no way out in the ghetto when there actually is.

Should be required reading for teachers,politiciansand kids

Published by Thriftbooks.com User , 18 years ago
As an African American women I know how hard being Black in this country is on a daily basis. I also know that our young males have an extremely tough time as they try to discover what manhood means in a world of hustlers and hard times. And this book so solidified to me what it is that politicians, administrators and teachers don't get - these kids are not inherently bad, stupid, lazy or dangerous. They are children, some of whom have parents with desires for their children but no understanding of how to guide them. They are children without mothers and/or fathers. They are children who had to raise themselves. They are children who had to decide at an early age how to survive long enough to make it home from school Who had to make decisions about who to be based on the gang colors of their neighborhood. Why don't we have more doctors, lawyers, scientists, etc.? The answer lies on pages 177-78 where Dr. Davis talks about having never held a stethoscope until he was in medical school. Doctor visits were few and far between for him as a kid. How is a child supposed to identify his desire if all he is exposed to his what stands on the corner near his house. Why do many Black students fail to graduate? That answer is on page 217 when again Dr. Davis describes how after 4 years of pre-med and 4 more years in medical school no one had bothered to tell him about the National Resident Matching Program. How are you supposed to know is someone doesn't help you.The most amazing thing about their stories is that even with all of the support from family members, teacher and counselors they all came dangerously close to still not making it through as the constant tugs from the street, their friends and family, society continuously made them hesitant and doubtful.This should be required reading for everyone from school administrators to parents, politicians, students and the President. We have much work to do.

A promise kept and dreams fulfilled..3 the easy way!

Published by Thriftbooks.com User , 19 years ago
The Pact .................................... . Drs. Sampson Davis, George Jenkins, and Rameck Hunt, with Lisa Frazier Page In the last several years I've read numerous and various books on remedies for the black community, the black male and what should be done for a greater understanding. Under the same auspices there have been race related analogies instilling in us the need to be accountable for meaningful intent to change our lives, related works reminding us that the battle is not over as of yet, and what it would take for equal parity as the struggle continue to be heard and recognized. I recently read a book that brought tears to my eyes and allowed me to have hope and congratulate three young men who dared to make a change in realizing a dream come true. All my life I've been cautioned about the perils of peer pressure, and the folly of placing too much emphasis on misguided friendship. In isolated cases there may have been situations where caution has been tossed to the wind and worst fears have been realized because one probably wanted to live the stereotypical notions given by others not of the same culture. But rarely do we witness male bonding used to an extent where three entities converge for the betterment of a greater whole. The Pact, told from hearts and minds of three boys out to succeed against a backdrop where others before them failed miserably, gives hope that our families and communities can reap what is sowed. George Jenkins, Sampson Davis, and Rameck Hunt has a story to tell, and what a story! All three grew up in an impoverished environment of broken dreams and unfulfilled promises. The old adage of there being strength in numbers prove to be an advantage as the three of them made a promise to each other: That they would stick together no matter what, go to college and become doctors. It wasn't until later that the notion to take it further came to fruition...and that is to empower the community with their own non-profit foundation. Now over 14 years later, after overcoming personal setbacks and other obstacles, they proudly bear the merit of having 'Doctor' in front of their names. This is the story of inspiration and vision where compassion has a chance to touch the inner city to dispel angst and glorify empowerment. The book is narrated alternatively with each giving analogies to specific points of contention as they depict their lives leading up to the decisions made. It all started when Jenkins learned about a special medical program for minority students. After a trying time of convincing his two friends to comply, they vowed to do what it would take to help get the others through, but not before Davis and Hunt have had their various run ins with the law. The book is well written in an easy flow manner in which it intrduces each one's autobiographical beginnings culminating with specific advice and personal

Published by Thriftbooks.com User , 19 years ago
If you want to get a book for that young directionless brother or sister out there, well this is the book to get. It is about three young brothers from the hoods of Newark who meet at a prestigious high school, and make a pact to go through college and medical school together. And they did it. Mind you, two thirds of the guys were not sure if medicine was the field for them initially, but with the incentives and convincing of the one person, they went through and finished med school in 1999. They also won the Essence Awards in 2000, and are doing well. I enjoyed and was empowered by these guys. When it looks like there is no hope, here comes someone to come and say that there is.
Trustpilot
Copyright © 2022 Thriftbooks.com Terms of Use | Privacy Policy | Do Not Sell My Personal Information | Accessibility Statement
ThriftBooks® and the ThriftBooks® logo are registered trademarks of Thrift Books Global, LLC