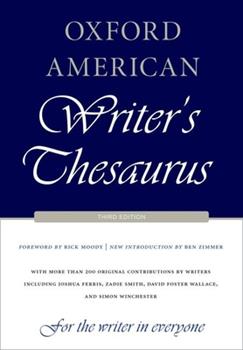 Much more than a word list, the Oxford American Writer's Thesaurus is a browsable source of inspiration as well as an authoritative guide to selecting and using vocabulary. This essential guide for writers provides real-life example sentences and a careful selection of the most relevant synonyms, as well as new usage notes, hints for choosing between similar words, a Word Finder section organized by subject, and a comprehensive language guide. The...

Published by Imtiaz Ahmed Shaikh , 3 months ago
A detailed piece of work. Marvelous

Best thesaurus I have seen

Published by Thriftbooks.com User , 16 years ago
If you are looking to buy a good thesaurus with practically every word in the english language then this is the way to go. The writers give you both formal and informal synonyms to the words that you look up. So far, there has not been a single word that I wanted to look up that was not in the thesaurus. The only thing the writers of this book included that was somewhat corny were short 5-6 sentence blurbs that do nothing but take up paper (only some words have these blurbs). For example for the word sexy, the blurb talked about how if someone calls you sexy, then you have it all. Other than that, this thesaurus if flawless.

A new and thought-provoking tool for writers

Published by Thriftbooks.com User , 18 years ago
I was given this as a gift and it was the best present I've received in years. The combination of essays and synonyms makes you want to rummage through the pages. The more words you run across the richer and more expressive your writing will be, and this thesaurus really introduces you to a glorious many. I really like the personal tone of the writers' essays -- it takes what could be a forbidding, boring reference book and makes it like taking a class with these writers. (Where is it written that reference books have to be overserious killjoys to be authoritative? This one manages to be both readable and responsible.) If you are still using a skimpy paperback thesaurus, upgrade! You'll be glad you did.

A New Concept, More Complete than Most

Published by Thriftbooks.com User , 18 years ago
Gustave Flaubert said, "All talent for writing consists after all of nothing more than choosing words." And how can that be wrong. Even as I write this review, I am only choosing words. But to say exactly what I mean is sometimes difficult. I want to say something, I know there is a word that expresses exactly what I want to say, but I can't think of it. Hence a thesaurus. This new thesaurus carries things a lot further. Rather than just providing a list of alternative words, here are real-life example sentences, explicit distinctions for the most commonly used synonyms and many additional features. As an example, here is the entry for the word dramatize: dramatize verb 1. the novel was dramatized TURN INTO A PLAY/MOVIE/MOTION PICTURE/FILM, adapt for the stage/screen. 2. the tabloids dramatized the event EXAGGERATE, overdo, overstate, hyperbolize, magnify, amplify, inflate; sensationalize, embroider, color, aggrandize, embellish, elaborate; informal blow up (out of all proportion).
Trustpilot
Copyright © 2022 Thriftbooks.com Terms of Use | Privacy Policy | Do Not Sell My Personal Information | Cookie Preferences | Accessibility Statement
ThriftBooks® and the ThriftBooks® logo are registered trademarks of Thrift Books Global, LLC