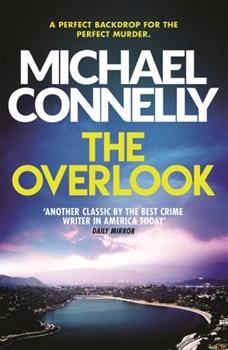 This description may be from another edition of this product. In his first case since he left the LAPD's Open Unsolved Unit for the prestigious Homicide Special squad, Harry Bosch is called out to investigate a murder that may have chilling consequences for...

“Another of Connelly’s “can’t put down” stories!

Published by S. Van , 1 year ago
A great book, but then aren’t Connelly’s all? Well thought out as well as well written, which of course is not unusual for this talented writer!

Harry Bosch Suffered for Your Sins

Published by Thriftbooks.com User , 13 years ago
I'm amazed and puzzled by the number of critical and tepid reviews this latest Harry Bosch novel has received here. Perhaps it isn't as good as the previous books in the series, but since I didn't know we were expected to keep score, I enjoyed it when I read it as it was serialized in the New Yawk Time Magazine and again when it appeared as a novelette. I suspect that the nay-sayers were merely not in the proper mood, because none of their critiques are very cogent. Certainly there are many faults and weaknesses that one could cite in Michael Connelly's writing. He is occasionally prone to lapse into purple prose - "A Darkness More Than Night"? [i]Woah! Duuude! You talkin' dark, huh?[/i] And the first sentence of this novel is the modern equivalent of "'Twas a dark and stormy night!" Furthermore, that whole maniac-serial-killer-plot vogue really peaked in the '80s, when every movie and every paperback was about a serial killer - as well as Serial Killer toothpaste and Serial Killer breakfast cereal. (It was a killer cereal!) So much so, that it must've seemed to those living in the civilized nations that every city in the USA had at least ten head of serial killers running around loose wreaking mayhem on Americans, and they were glad to be living in the relative safety of Bosnia. By the time Michael Connelly began writing about his serial killers, the whole device had become shopworn and hackneyed. Harry Bosch is, of course, Michael Connelly's most popular character, but in retrospect, the entire series is just [b]Michael Connelly writing the same novel over and over again![/b] They're all basically the same book because 1.) Harry Bosch has always just returned to duty after having been (wounded/suspended/prematurely retired/ held in abeyance while Michael Connelly's agents negotiated the movie rights). 2.) Before he can get rolling on the case, however, he is always confronted by his nemesis, (Captain/Deputy Chief/ former Chief) Irving Irving, who menaces Bosch with the threat, "You are going down this time, Detective! We are the Higher-Ups, and we, the evil Higher-Ups, are intent only on making things impossible for detectives!" The concept of the dastardly and meddlesome superiors in the chain of command - as well as the maverick cop - has likewise been done to death and became threadbare with the Dirty Harry movies. 3.) Unlike your grandmother, Bosch is still too stupid to use a simple search engine. 4.) In each novel, Bosch unexpectedly meets his old flame, beautiful (former/active) FBI agent (Eleanor Wish/Rachel Walling), and they promptly end up in (her/his) bed. Alas, the romance never works out, and by the end of the novel they once again go their separate ways, leaving Bosch, the loner, alone again, naturally. (Sigh!) 5.) Confounded in his efforts to apprehend the suspect, Bosch consults a psychic profiler, who - as with real-life profilers - spouts so much psycho-babble and dime-store analysis (that the female was stabbed 143 times

I'm just gonna have to gush because Connolly is such a great writer.

Published by Thriftbooks.com User , 14 years ago
At this point in time, I'm going to have to vote him the top writer that I've read, and I'm constantly reading books. I go through at least 1 book a week so I read a lot of different authors. I know, I know, there've been complaints that this is just a resurrected book and he's doing it for the money or whatever, but so what, this book is much better than the last 3 I just read, and 10X value for the money. Per my usual MO, without going into the plot, what makes this a good book? Answer: Good writing, good plot and characters that you can sink your teeth into. He has a knack of making the situation real and believable. For example, in describing a person, an amateur author would say "Tom is a good man, he is smart and suave." A very poor writer would say "Tom had the chiseled good looks that 1/2 the women in Seattle would die for, and his aristocratic manners demanded attention from even the most arrogant of waiters." Connolly doesn't do any of that. He puts his characters into situations where they react and from their reactions, you feel what they are like, and you slowly build up your impression of the character from multiple situations, just like in real life. For example, when you meet someone at a party, there is no giant narrative voice booming a description of this person in your head. You observe this person, how he/she interacts with you or other people, listen to what they say and that's how you form your opinion of this person, and that's how Connolly does it too. Now, that's great writing and something other writers should try and emulate. Unlike what some people said, I love the plot, I think it's one of the better ones that Connolly has written, I won't say more otherwise I'll be giving it away.) I don't think it matters that it was originally a serial in a newspaper. However, it was a short book and I finished it easily in a day. A soley plot driven book can only be read once. Once you know the plot you can't really read it again. But a character driven book can be re-read many times, since you can revisit how the character reacts to the different situations in the book. Like when reading Bosch, you can mentally high five yourself when Bosch figuratively flips the bird to the FBI or his boss. Connolly does such a good job of vilifying some characters that you want to see Bosch do it again and again. That's what makes a good book and good reading. Personally Bosch's actions make me cringe. I'm somewhat of a conformist and it makes my toes curl when Bosch once again decides to smart mouth his boss or someone else. Perhaps my non-conformist self is living vicariously though him, anyway...... To people who are already Connolly fans, I'm preaching to the choir. I'd say buy the book, you'll love it, even though it's short. To people who have never read Connolly, you might not want to start with this one. Bosch comes with a lot of baggage and you might want to start with his first book to get the whole picture. But mark wha

Published by Thriftbooks.com User , 14 years ago
This shortened novel is the completed serialization Connelly did for the NY Times. It is a short but entertaining look at Harry Bosch after Echo Park. New situation, new partner. And it does not fail his readers. Harry's character still acts with his own sense of honor and duty. Never taking his eyes off of the goal - first and foremost a murder - a scientist who was coerced to steal radioactive substances to save his wife's life, is murdered after he comes through with his part of the deal. With a quantity of radioactive materials not accounted for, the FBI and National Security are called in. Piecing together the actions and the facts are what Harry does best, and he doesn't fail us. From start to end, the book covers about 12 hours real time - and that was fascinating to see Harry in action under time constraints. While this book may not have had the time for the usual complexities, Overlook comes through for us - until we get the next full length adventure.

Best yet from a continuing best yet writer

Published by Thriftbooks.com User , 14 years ago
Michael Connelly is simply the best in a field with very few hacks these days.I write in this genre, too, but I do not compare. In addition, I have been a federal agent, a criminal investigator, as well as a public defender investigator. This is a preface to remark on how accurate Connelly is (rarely so in fiction), and how close to the actual "feeling" of the real thing he comes with his characters. I know he was a crime reporter, but this guy knows people in the life who trust him, and who inform him from the most ragged center of those in the business. And last, this guy can write. It may be a genre, but this is also mainstream American Novel writing. Philip Shelton

Published by Thriftbooks.com User , 14 years ago
This was a pretty quick read, just 224 pages, but with plenty of plot twists, seemingly trivial evidence that turns out to be crucial, interesting character development, and bureaucratic turf battles -- this time mostly pitting Bosch against the feds, rather than LAPD. One particularly timely aspect of the book is the terrorism angle. I don't recall Bosch ever being involved in those sorts of cases before. Although I rate Connelly's "Blood Work" and "Trunk Music" higher, "The Overlook" is still outstanding.
Copyright © 2020 Thriftbooks.com Terms of Use | Privacy Policy | Do Not Sell My Personal Information | Accessibility Statement
ThriftBooks® and the ThriftBooks® logo are registered trademarks of Thrift Books Global, LLC