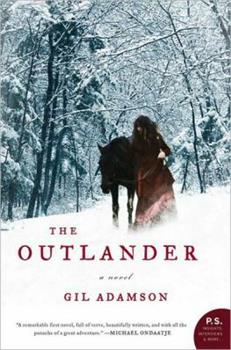 (Book #1 in the The Boultons Series)

In 1903 Mary Boulton flees alone across the West, one heart-pounding step ahead of the law. At nineteen, she has just become a widow-and her husband's killer. As bloodhounds track her frantic race... This description may be from another edition of this product.

Published by Brooke Anne , 5 months ago
Gil Adamson wrote a thrilling novel of adventure, murder, pain, and loss. Kept me on the edge of my seat. I love how detail oriented she is and how this book just throws you directly in the middle of all the action. Loved it, highly recommend.

Published by Hailey , 1 year ago
I watched the Netflix series and loved it can't wait to start the book series! The book came quickly and in excellent condition!

Published by Thriftbooks.com User , 3 years ago
The Outlander keeps you engrossed with the story the whole book. Definitely a keeper.

`Abundance lay about her but she starved'

Published by Thriftbooks.com User , 13 years ago
In 1903, a newly widowed young woman of 19 is escaping the consequences of both the murder of her husband and the events surrounding it. Her brothers-in-law are intent on catching her to make her face justice. This sets the scene for a brutal journey through the cold western wilderness of the Rocky Mountains in Alberta, Canada. The widow (as she is generally referred to throughout the novel) carries with her the demons of her past and some of her recollections are not entirely reliable. The widow knows that there is no safe place for her within the confines of what passes for civilisation and so she flees across the Rocky Mountains. There are a number of different themes in this novel and the setting itself is important. The environment is both beautiful and harsh. In order to survive, the widow needs to appreciate both and to adapt. Along her journey she meets some interesting characters, most of them outlanders in their own way, and learns how to survive. Can she find an enduring happiness? At times the widow's mind is a confused and confusing space. It isn't always clear where reality begins and ends but this is integral to the story itself. This may not be an easy novel to read, but it is beautifully written and well worth the journey. I found myself reading slowly in order to appreciate the journey while simultaneously wanting to rush ahead to find out the ultimate destination. This is Ms Adamson's first novel, and I'll certainly be looking to read more of her work. Jennifer Cameron-Smith

We All Become Outlanders

Published by Thriftbooks.com User , 13 years ago
The Outlander is one of the most perfectly titled books I've ever read. Every character, every location, even every major event in the plot is somehow isolated from the real world. Gil Adamson's wonderful prose carries with it a sense of otherness, making this debut novel a fine read. We don't learn the actual name of the protagonist, Mary Boulton, until over 100 pages into the book. Until then, and mostly thereafter, she is referred to as "the widow," which not only gives her a slightly off-center identity, but describes her situation as well. Mary wants to be anonymous, and with good reason: she killed her worthless husband and is pursued by his revenge-seeking twin brothers. The details of her past unfold slowly as Mary tries to disappear into the wilderness of Idaho and Montana, dragging along her memories of a loveless childhood, a brutally unhappy marriage, and a dead child of her own. Her fragile mental state teeters on a razor's edge between reality and hallucination throughout her journey and eventual liberation. The other characters in the book are "outlanders" too. The evil twins--gawked at by the superstitious citizens of the time--are relentless in their pursuit, driven by their need to avenge their brother's death to gain the approval of their aloof and demanding father. The various people who help Mary along the way, Mrs. Cawthra-Elliot (a widow herself), the Crow Indian Henry (actually born in Baltimore) and his white wife Helen who helps her, the Reverend Bonnycastle and the dwarf saloon keeper who befriend her in an isolated mining camp, all are apart from society in some way. The most isolated of all is William Moreland, the Ridgerunner, who has been living in the mountains as a hermit for so long he doesn't know what year it is. He becomes Mary's lover and eventual salvation. Gil Adamson's talents as a poet translate well into long prose. Her scene-setting descriptions in particular have cadence and structure that make them lyrical but never cloying: "In the early morning, amid the trembling of mountain aspen, three horsemen came. They crested a rise one by one, the horses blowing, for they were heavily packed, and their riders were large." When we see it like this--through Mary Bouton's haunted eyes--we become outlanders, too. The experience is very rewarding. Dave Donelson, author of Heart of Diamonds: A Novel of Scandal, Love and Death in the Congo

Published by Thriftbooks.com User , 14 years ago
In 1903, nineteen years old Mary Boulton calmly grabs her husband's rifle and fires killing him. The widow knows she cannot hang around not because she fears the law, but her abusive brother in laws would enact vengeance in their vicious style. Mary flees across wintry isolated Idaho and Montana while knowing in her composed gut they pursue her. On her trek, she reflects on her unhappy but thankfully short marriage exacerbated by the dead child. As her deep depression enables her to remain eerily unruffled, she meets people along the way. First there is the Frontiersman who admits creeping civilization makes him depressingly feel like an anachronism; then there is the Reverend who treats her like an adored daughter. There are others some not as kind towards the itinerant female especially after a mining disaster that the locals feel she caused by being there. However, the worst is coming as the brothers are nearing and the Reverend wants to change their relationship to that of more of equal partners. An allegory of a way of life that seems all but vanished, THE OUTLANDER is an excellent historical thriller starring a strong support cast, a spirited lead female, and a vivid picturesque setting. Readers anticipate High Noon is coming, but it is the trip to the final showdown that makes for a deep look at early twentieth century America in a remote part of the northwest. Harriet Klausner

One of the most haunting books of the year

Published by Thriftbooks.com User , 14 years ago
I read this book last fall, when it came out in Canada, and I was ABSOLUTELY mesmerised by it. Adamson can write, there is no question! Not since Anne Michael's book, "Fugitive Pieces", have I been so completely enthralled by an author's use of the English language. Adamson has, until now, been a poet and that is evident in every sentence she writes. And yet, the book does not get bogged down in flowery description. Instead, one is drawn into a beautifully crafted world; a world populated with interesting, FEELING characters - characters which are fully formed and which deserve our interest. There are a couple of moments in the novel that I particularly loved. The first is the moment when Mary dreams of her father fishing. At one moment, Adamson writes: "The sun was sharp on the corded water, dancing like pennies on a blanket." Simply beautiful. The second, and possibly most powerful moment in the novel, occurs in Chapter 19 when Mary recalls the moment of her mother's death and her father's response to it. She writes: "Her father, too, was sleepless in those days. And staggering. Rum was his drink, and so a sweet reek followed him about the house, burnt toffee cut with piss, and his breath was rank. He would go whole days without responding to anyone; he would not even meet his daughter's eye, but stared dully ahead, too deep in the smoking ruin of his hear to see the world." The passage goes on and through it we see a husband and father torn apart and destroyed by grief. A grief which leaves a lasting effect on the daughter. I cannot recommend this book highly enough. If you read only one book this season, make it "The Outlander."

Published by Thriftbooks.com User , 14 years ago
Outlander by Gil Adamson is one of those novels that somehow gets under you skin a little. You find yourself somehow colored by the story and catch yourself remembering an incident in the story during the day while your at work and not reading. Not all books come to mind at odd times during the day, but this one does. Set in 1903, young Mary Boulton is living in an isolated cabin. After losing her baby, and suffering from depression she kills her husband when she learns of his infidelity. Pursued by her dead husband's brothers, Mary is faced daily with life and death situations. Not really being equipped with survival skills each day is a test, but she proves herself to be resilient and manages to evade her pursuers. As she makes her way to an uncertain freedom through Idaho and Montana, she manages to run into quite a mixture of individuals; some pretty unsavory outcasts, but others that prove to be helpful. With the little help she receives from these unwitting characters Mary manages to survive....at least for a while. In spite of the fact that Mary is a murder it is difficult not to see her in a sympathetic light. Gil Adamson is a wonderful novelist and reminds me of Andrea Barrett author of Ship Fever, Voyage of the Narwal, Servant of the Map and others. Though the author of Primitive, a book of poetry, and Help Me, Jacques Cousteau, a book of short stories Outlander is Gil Adamson's first novel. Do novelists who are poets first make better storytellers than those who aren't? In addition to Adamson, I'm thinking of Ron Rash, author of One Foot in Eden, Saints at the River, and The World Made Straight. There is a gift for dialogue and a playfulness with the language that just seems special by these authors.
Trustpilot
Copyright © 2022 Thriftbooks.com Terms of Use | Privacy Policy | Do Not Sell My Personal Information | Accessibility Statement
ThriftBooks® and the ThriftBooks® logo are registered trademarks of Thrift Books Global, LLC