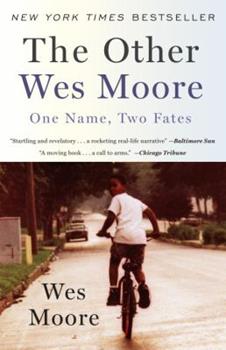 The Other Wes Moore: One Name, Two Fates

The chilling truth is that his story could have been mine. The tragedy is that my story could have been his. Two kids named Wes Moore were born blocks apart within a year of each other. Both grew up fatherless in similar Baltimore neighborhoods and had difficult childhoods; both hung out on street corners with their crews; both ran into trouble with the police. How, then, did one grow up to be a Rhodes Scholar, decorated veteran, White House Fellow,...

Published by Thriftbooks.com User , 11 years ago
Wow--what a difference opportunity can make. This book brilliantly lays out the paths of two very different men who share the same name. You can really see how the circumstances in each of their lives contributed to their success and failure. This does not take the responsibility away from the error of the Wes Moore that is in prison for murder nor does it excuse his crimes. However, it will make you wonder and consider what roll you can play in your own neighborhood, your children's lives, the lives of strangers--to help improve the chances of a successful outcome. I realize this world has many very privileged people who have not taken advantages of the opportunities given to them as well as many people who have a life of hardship and suffering that have made tremendous successes in their lives. But there seems to be no doubt that the more support, propping up, and opportunities a person has, the more likely they are to achieve success. I hope this books sparks inspiration in readers to think of 1 thing--even if it is very small--to do to help give someone around them a better opportunity. We all benefit when people succeed and all suffer when they fail. Unfortunately for the victims of Wes Moore, they suffer the most from his mistakes. But on some level, we all do--whether it is in higher taxes to support the criminal justice system, or whether a child now grows up fatherless, or whether it means that as a society we lose out on the potential accomplishments that Wes Moore could have achieved if there were different opportunities for him. Again--I am not suggesting Wes Moore the Rhodes Scholar should not get credit for his success--he earned it--he did it. yes he had support, but he ultimately put in the work. I'm also not suggesting the other Wes Moore isn't responsible for his actions--he is--in every way. This book is a great read. Hopefully it will make you think regardless of the conclusions you draw. It certainly touched my heart and i found it very interesting, engaging, and an easy read.

Published by Thriftbooks.com User , 11 years ago
Many of us do not have the opportunity to see the fruits of our "What if questions..." Those are the types of questions that arise during those contemplative times where we wonder about the decisions we've made and the trajectory those same decisions have set us on. Wes Moore, by the strange coincidence of learning about a wanted man who shared his name shares his answers to many of those what if questions in his book, The Other Wes Moore. Wes Moore sheds light on those things that defined the type of place he and the other Wes Moore grew up in. Things such as family, community, respect and manhood. There are decisions that are made which are out of both of the lives of these men who share a name that also help them to define the norms of their world. Those decisions, their environments, their own decisions and the people around them ultimately help them to lead lives that are at ultimate odds with one becoming a Rhodes Scholar and what many might deem a model citizen while the other is a high school dropout living the rest of his life in jail. This, as you'll find, is no spoiler. The Other Wes Moore should cause the reader to step back and question his or her own assumptions about socioeconomic conditions and the role of community and family in the development of young people. Both of these young men came from families who wanted them to succeed - to be more than what the world expected them to be. The Other Wes Moore is a wonderfully written story, communicated clearly, which portrays lives that are borne out of similar contexts whose subtleties are more than footnotes in the mental and emotional formations of both Wes's. Was it what some would identify as "luck," that got one Wes Moore into Johns Hopkins and the other in Jessup? What part do resources (financial and familial) play? Are there any clear advantages that one had over the other? This is a book that was hard for me to put down. I'm guessing that it's a book that will be hard for me to forget. It will leave you asking what sort of legacy you yourself will leave as opposed to asking, "What if...?"

Get this book! Inspiring, Important and enlightening.

Published by Thriftbooks.com User , 11 years ago
Shaped and steeled by the most important issues of our time, Wes Moore's inspiring story will come to define America's Next Greatest Generation. The Other Wes Moore is a story of courage, resilience and patriotism. Wes Moore is a name all Americans should know. His personal triumph over adversity is a refining of the American dream. He has shown us all what it means to serve, to sacrifice, to inspire--and to elevate. If you care about the future of this country, get this book. --Paul Rieckhoff, Founder & Exec­u­tive Director, Iraq & Afghanistan Vet­er­ans of Amer­ica (IAVA)

The difference betweren reasons and excuses

Published by Thriftbooks.com User , 11 years ago
At first glance, this book looks like an interesting read based on an unusual coincidence. A young Baltimore man named Wes Moore, an Army officer who had just graduated from Johns Hopkins and was named a Rhodes Scholar, learned that another young Baltimore man also named Wes Moore had just been sentenced to life in prison without parole for his role in a robbery that resulted in the murder of an off-duty policeman. The first Wes Moore naturally began to wonder about why he had avoided the fate of the second Wes Moore, even though their surroundings and upbringings had been quite similar. So, in a way, this is a "Wow! It could have been me in prison!" story. That probably would have made for an interesting book, but Moore chose to examine his life and the second Wes Moore's life in parallel with one another in an effort to determine where-- and, more importantly, why-- their fates diverged. That makes this an important book, because it raises a critical question: What makes so many young men-- and particularly black, poor young men raised mostly by their mothers-- choose the drug trade and all of the violence that attends it as a career? As it turns out, Moore can't answer that question. As he explains, both he and the other Wes Moore were raised at the same time in the same high-poverty, drug- and crime-plagued area. They both began to struggle in school at about the same time. They both had early brushes with the law due to petty crimes at about the same time. However, their lives took dramatically different paths. Moore never specifically says it, but nonetheless, as one reads his account of their parallel lives, the difference is in the ways that their mothers lived their own lives and reacted to what their sons were doing. Moore's mother was raised by college-educated parents, and she spent her life working and struggling to achieve things for herself and her family. She moved several times in an effort to find stable, safe places for her kids to grow up, and she worked several jobs so she could afford to put her kids into private schools. When it appeared that Moore was going to fall into the thug lifestyle, she sacrificed economically and emotionally to put him into a military school. In short, she simply refused to allow herself or her kids to succumb to the conditions and temptations that surrounded them. In contrast, the other Wes Moore's mother tried to resist those conditions and temptations, but she eventually did succumb to them. She simply gave up. At the same time, unlike the first Wes Moore's mother, she allowed her kids to see violence as an acceptable way to resolve problems in their lives. In the end, it comes down to forks in the road of time. At several critical points in his youth, the first Wes Moore went down one path, mostly due to the influence of his mother. Unfortunately for the other Wes Moore, there was no one to influence him to take the "right" path, and he chose the easier, more glamorous pa

Two young men at a fork in the road

Published by Thriftbooks.com User , 11 years ago
In 2000, a Baltimore newspaper ran a story with the headline, "Local Graduate Named Rhodes Scholar." It was a story about the author, Wes Moore, a young black man who rose from the drug, crime and poverty-stricken streets of the city to attain this prestigious academic honor. Several months earlier, in the same paper, Mr. Moore had noticed a series of articles about two young black men who killed a Baltimore policeman while robbing a jewelry store. The name of one of the killers struck him: his name was Wes Moore. This coincidence prompts the author to seek out "the other Wes Moore." He contacts Wes in prison. "How did this happen?" he asks. The question jumpstarts the story of these two young men whose life paths diverged, one into triumph, the other into tragedy. The author comes to realize that this seemingly complicated story, a too-familiar story that is freighted with societal, economic and racial impact, comes down to a few simple moments in time. "These forks in the road can happen so fast for young boys," he says. "Within months or even weeks, their journeys can take a decisive and possibly irrevocable turn." I would more specifically pin the divergence on the boys' mothers. The author is born into a two-parent home, both parents college educated, but his father dies when Wes is just three. His mother moves to the Bronx, so that her parents can help provide a stable home life. She works multiple jobs so that she can put her boys in private school. When the author starts to feel the pull of the streets, she packs him off to military school. The other Wes Moore grows up in a single-parent household of starkly different character. His father is absent and his mother frequently dumps him on friends and family so she can go out clubbing. Although she'd been attending community college, she loses her Pell Grant and simply gives up. Disagreements in the home are handled with beatings. The older brother gets into the drug trade, and all three of them, mother and two sons, bring babies into the world without the stability of marriage. It's no surprise when the other Wes Moore's run-ins with the law begin. This is a compelling story told with passion and understanding. While the author is compassionate, he also makes clear that he is in no way excusing the other Wes Moore for his heinous deed. Even so, I imagine this is a tough book for the family of the slain policeman to read. If you want another great story of a young black man from Baltimore who succeeds thanks to his determined mother, read Byron Pitts's Step Out on Nothing: How Faith and Family Helped Me Conquer Life's Challenges.
Copyright © 2020 Thriftbooks.com Terms of Use | Privacy Policy | Do Not Sell My Personal Information | Accessibility Statement
ThriftBooks® and the ThriftBooks® logo are registered trademarks of Thrift Books Global, LLC