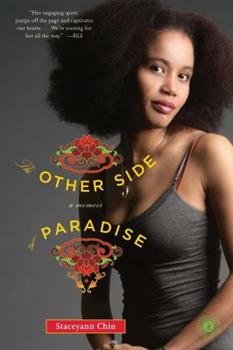 The Other Side of Paradise: A Memoir

Staceyann Chin has appeared on television and radio discussing issues of race and sexuality, but it is her extraordinary voice that launched her career as a performer, poet, and activist--here, she shares her unforgettable story of triumph against all odds in this brave and fiercely candid memoir. No one knew Staceyann's mother was pregnant until a dangerously small baby was born on the floor of her grandmother's house in Lottery, Jamaica on Christmas...

A pitiful life for a bright and talented little girl

Published by Thriftbooks.com User , 13 years ago
I picked this book because my husband and I lived in Kingston, Jamaica for a few years. I thought I had a good understanding of the Jamaican culture, but I really appreciated this insight to the poor of Jamaica and the kind of lives they lead everyday. I learned a lot. This is a book about StacyAnn Marshree Chin. Her mother must have loved her to have named her Ma Cherie, wouldn't you think? Don't think too fast, or assume anything. This little girl dealt with circumstances so pathetic, with a bright light of potential that few seemed to recognize or care enough to nurture. If you are looking for a hero, look for it in the tiny little girl that was born so small they didn't think she'd live. I will say that if I hadn't actually lived in Jamaica I may have been skeptical that such things could happen in a Caribbean tourist hub such as Jamaica. But I volunteered at an orphanage there, and I saw things that would rival the Romanian orphans rocking themselves uncontrollably. In Jamaica, life is often not fair and there are no guarantees, in this case light skinned and keenly intelligent being or not. Stacyann Chin is one of those souls born with a quick mind and lips that sometimes betray her best interests. If you don't want to google the author by the end of the book I would be shocked. I did! This book would be interesting and poignant without having ever been to Jamaica, though.

Published by Thriftbooks.com User , 13 years ago
The Other Side of Paradise by Staceyann Chin has everything going for it--dramatic circumstances, poetic voice, emotional depth, and even some moments of humor between the more brutal ones. Sharing her story about growing up in Jamaica, abandoned by both mother and father, Staceyann and her brother, Delano, are shuffled from home to home. In spite of the constant shifts, Chin manages to fight for her education, a foundation that will eventually lead to her leaving Jamaica and moving to the United States. Between the poverty of her grandmother's home and her eventual move to New York City, Staceyann is faced with racism, sexism, and the constant danger of being used and abused for who and what she is. What Chin manages to do brilliantly is to immerse the reader in her childhood, using dialect to flavor her narrative without its becoming distracting. Her experience as a poet and performer infuse her story with beauty and truth. The details of her narrative are so tightly woven that the memoir reads like a novel. And unlike so many memoirs I've read, there is no glossing over to get to the happy ending. Chin is brave enough to end her memoir with a sense of hope but no real closure. While other writers hastily clutter the final chapters with events to offer the reader the type of closure life rarely affords, Chin manages to end her memoir at a point that is both satisfying and natural if not conclusive. The reader is definitely left wanting and hoping for more, with the inevitable questions drawn from the author's brief cover bio hanging in the air. When Chin arrives in New York, how does she go from immigrant to poetic force (with multiple appearances on Russell Simmons' Def Poetry) to one-woman performer in her own off-Broadway show? And at what point does she go from her own realizations to advocacy, appearing on Oprah, and being encouraged to share her story by writing what I hope will be her first memoir? With so many memoirs being labeled "inspiring" I am loathe to add one more to the burgeoning list and yet Chin's story is exactly this--inspired and inspiring. I look forward to seeing where this remarkable woman will take herself and her voice next. I only hope that on her book tour our paths cross. I'd like nothing more than to thank her in person for her brilliance.

Published by Thriftbooks.com User , 13 years ago
This woman is ONE BAD SISTA! Honestly, I did not know what force this woman had within her until I saw her at the book reading recently of her memoir at a local bookstore in NYC. Unlike my sister friend that I was with at this event, I was oblivious to what I was about to witness from this petite woman with the big hair. She looked calm approaching the stage but when she belted out the first few words from her novel I was in awe at her presence and, after reading her life story (thus far), her courage! My goodness...she seems almost heroic to me. I think she is because her childhood was put through the grinder time and time again. I didn't know how anyone could be able to survive such abuse, abandonment and uncertainty about one's future that way that Staceyann has done. From the moment of her birth in Jamaica, she fought to live, she fought to grow and she fought to survive while maintaining her knack for being so outspoken as a feminist and leader for gay rights! That woman in this book was Staceyann and her experiences led her to that very spot on that bookstore stage. I don't pity her--I have immeasurable respect for someone who sustains their individuality and does not cower to the boundaries that others want to place on your life--how you should live it, what you should say, etc. Although you might not know who Staceyann Chin is, after reading this book you will know a little more and want to learn more and more about her!

Published by Thriftbooks.com User , 13 years ago
Jamaica is a beautiful island. It is a paradise. Like every other paradise it has its other side. StancyAnn Chin takes us to the other side of that paradise. No, she doesn't write about it. She takes us there. She is an exceptional writer. She describes painful moments in moving ways so that you may not feel them so painfully yet you can move about within those moments as if you were there. Genius. This is one of those rare memoirs you keep going back because there are events you can't fathom. And there are events that remind you the humanity of that life. That little girl on the cover who is jumping in the sun, her world is both liberated and haunted. And it is all in the irony. In the sunny homeland she encounters abuse; in the depressing winters of New York she finds strength to stand up. What I best love about this book is the way it relates to all of us. It is not about a lesbian or a Jamaican or a woman even. It has a universal feel. Themes that we can all relate to. Nobody wants to be unloved or abused or sink into depression. If you can come back from all those things, then you can enjoy this side of paradise. The paradise within.

Published by Thriftbooks.com User , 13 years ago
Even though I was born in Kingston, Jamaica, I never experienced the things that Staceyann Chin encountered and overcame. As I read Ms. Chin's memoir entitled, The Other Side of Paradise, I learned about places I had no clue existed in Jamaica. I also realized that Ms. Chin was a fighter from the day she was born. She fought for survival and freedom to be who she is without having to be afraid someone would punish her in whatever way they felt like. I became very emotional as I read about the way she was passed from one house to the other. I cried for everything that should not have happened to any human being; such as, abandonment, molestation, and dealing with her sexuality. I recommend The Other Side of Paradise to anyone who likes memoirs; those who believe they cannot make it through the tough times; and most of all to anyone looking for things to be placed on a silver platter for them. Staceyann Chin is an example of what a person can achieve when they want to experience change in a positive way. Jennifer Coissiere APOOO BookClub
Trustpilot
Copyright © 2022 Thriftbooks.com Terms of Use | Privacy Policy | Do Not Sell My Personal Information | Accessibility Statement
ThriftBooks® and the ThriftBooks® logo are registered trademarks of Thrift Books Global, LLC