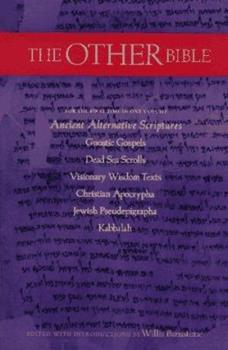 Gathered here for the first time in one comprehensive volume are excerpted ancient holy texts from Judeo-Christian traditions that were excluded from the official canon of the Old and New Testaments. The Other Bible is a unique sourcebook of essential selections from Jewish Psudepigrapha, early Kabbalah, Haggadah, Midrash, Christian Apocrypha, and Gnostic scriptures. The Other Bible provides a rare opportunity to discover the poetic and narrative...

Published by Other Bible , 9 months ago
This book is a compilation of belief systems contrary to the Bible Not for anyone in my opinion

Published by Thriftbooks.com User , 15 years ago
Willis Barstone, the compiler of the paralell text 'The Gnostic Bible', has here collated a wide range of diverse ancient religious literature. In his introduction, Barstone concludes 'We have recieved a highly distorted and censored version of ancient religious literature...and now we can see these traditions free of their doctrinal strictures.' The historical evidence does support this thesis, though authors like Dan Brown tend to greatly exaggerate a 'conspiracy' to hide certain ancient documents. What is true was that during the first few centuries after the ministry and teaching of Jesus, there was not one canonical Bible like the one we had today, but instead a very wide range of Christian movements, from Gnostics to Marcionites to the Proto-Orthodox, who all claimed to faithfully represent Jesus and his teachings. During this time all these movements produced countless Gospels, Acts, accounts of the creation of the universe, Infancy Stories and legends about Jesus and the Apostles, as well as bizarre myths about the fall of the female wisdom, Sophia, from the heights of the pleorama and the tragic creation of the God of the Old Testament, the 'Demiurge.' With the victory of the Proto-Orthodox and the laying down of a fixed Biblical canon, the Church authorities were keen to bring the Christian religion under tight ecclesiastical control, and many works disagreeing with official doctrine were burned or destroyed, and movements deemed 'heretical' persecuted. A lot of 'Gospels' and other works of literature, as well as the literature of the Gnostics, was lost, until discoveries in the 19th and 20th centuries by scholars unearthed much material, such as the Nag Hammadi Library and the Dead Sea Scrolls. What these discoveries have shown is that Christianity was far more diverse and less unified in its beliefs than was originally thought. In truth, the works used in the other Bible are well known to scholars of mysticism, ancient literature, philosophy, and theology, so they do not necessarily present a danger to your faith, though to the unprepared the notions in much of the literature can seem odd. In our 21st century age, we are used to finding truth in logic and science, whereas the writers of these ancient works found it in inner visions, mystical experience, and processes somewhat like the creation of art, music or poetry. As Barnstone says, there is a lot of very beautiful material material here, from the Gnostic Gospel of Thomas which emphasizes finding the divine within rather than hell and judgement, to the remarkable visions of the Books of Enoch which later were a source of imagery for the writers of Christian apocalyptic works, to the hauntingly beautiful poetry in the Odes of Solomon. Somewhat less attractive are the rambling stories of the Aggadah, the confused and frenzied visions of the Gnostics, and their bizarre and pathological hatred of the universe, the world and the human body, the violent visions of doom

Published by Thriftbooks.com User , 20 years ago
This is a wonderfull compendium of Gnostic, Hermetic and non-cannonical Judeo-Christian scriptures. You will find selected chapters and passages from a ubiquitous array of ancient texts influenced by many faiths and philosophies.Among other things, this book introduces you to:-- The origin of the fallen angels and levels of heaven and hell (Book of Enoch et al) later depicted by Dante and Blake.-- The Nag Hammadi Gonstic texts-- The Hermetical texts-- The Manachean texts-- The Mystical texts of the Dead Sea scrolls and Kaballah-- Strange Gnostic Christian beliefs from Simon Magus to the almost Satanic Cainites.-- The complete 'Q'-sourced Gospel of Thomas-- The Infancy Gospels of ChristOne of my favorite selections, The Infancy Gospel of Thomas, reminded me of the Jerome Bixby SF Classic "It's a Good Life." with little Jesus terrorizing the town (wishing bad people away).You will clearly understand after reading this book just how hetergeneous the early Christian communities really were in their beliefs. In fact, the earliest beliefs seem more Gonstic in flavor than they later came to be with the establishment of the Roman Church.I would highly recommend this book to both the scholar and faithfull alike. For the former, it offers a look at the hisotry and development of Western religion and philsophy through original source material, while to the latter, the origin of some widely held notions, particularly about Heven and Hell, can be found here.

Published by Thriftbooks.com User , 21 years ago
Willis Barnstone did an excellent job in compiling "The Other Bible". This book is one of the best that I've encountered as to having almost all the Gnostic, Pseudepigrapha (Jewish), Apocrypha (Christian)books, and the Dead sea Scrolls translated into common english. I highly recommend this book to anyone interested in alternative scriptures for use in problimatic archaeological writing where other written material would be useful. The only problem with the book is the bias I detected on the part of the editor, and the fact that other Christian-Jewish apocrypha were left out of this publication (Ex: The book of Adam and Eve 1 & 2, most all Apocrypha of the early church letters , The Story of Ahikar, and The Testaments of the Twelve Patriarchs). However, this book does rate very highly as compared to other apocrypha translated books I have read in the past. A must for anyone interested in this type of literature.
Copyright © 2020 Thriftbooks.com Terms of Use | Privacy Policy | Do Not Sell My Personal Information | Accessibility Statement
ThriftBooks® and the ThriftBooks® logo are registered trademarks of Thrift Books Global, LLC