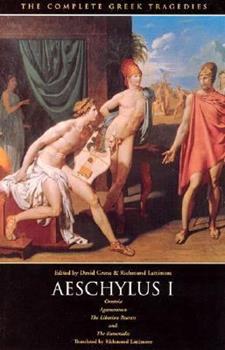 (Part of the Oresteia Series)

"These authoritative translations consign all other complete collections to the wastebasket." Robert Brustein, "The New Republic" "This is it. No qualifications. Go out and buy it everybody." Kenneth Rexroth, "The Nation" "The translations deliberately avoid the highly wrought and affectedly poetic; their idiom is contemporary....They have life and speed and suppleness of phrase." "Times Education Supplement" "These translations belong to our time...

I love this Orestia!

Published by Thriftbooks.com User , 13 years ago
Again, I compared many different Orestia's and fell in love with this one on Hackett by Meineick. It reads beautifully and easily and the drama and intensity is unmatched. You also get a believable sense of the characters, and the setting in this one. It is in my opinion the best modern version that can be most easily performable with no archai-sisms in the language. I always go with Hackett now that I've found some really excellent translations! Highly recommended.

An Interpretation, Not a Translation

Published by Thriftbooks.com User , 17 years ago
No, the translation is not literal. If you want a literal translation, buy something written by a professor of Greek. Hughes has a different goal. He¡¦s a poet who wants to interpret this ancient literature into an idiom that modern audiences can understand and appreciate. I wouldn¡¦t even call this a translation. Let¡¦s call it an interpretation and skip over the problem of accuracy. That being said, his interpretation is extremely good. The free verse is both powerful and extremely readable. By putting these stories into a more familiar medium, Hughes recaptures the horror of these plays. By modern standards, the latter plays (Choephori and Eumenides) aren¡¦t very dramatic. The main point is to watch the cycle of revenge play out to a conclusion. But the first play in the trilogy (Agamemnon) is close enough to modern taste to have a huge impact. I was very moved.

The Verdict, "Two Thumbs Up"

Published by Thriftbooks.com User , 18 years ago
..."The Eumenides" was a captivating play with a few minor flaws. To fully understand the play, one must first understand the history that went on before the play took place. "The Eumenides" was written by Aeschylus and is also known as "The Furies", the third play of The Oresteia Trilogy. This play is set around the time period of 1250 B.C., approximately the same time as the Trojan War. The main character of the play is Orestes from Argos. In the plays before "The Eumenides", Orestes killed his mom, Clytemnestra, who killed Orestes' dad, Agamemnon, after he returned home from war. Orestes was told by Apollo to kill his mom in order to avenge his father's death. Therefore, this is the reason "The Eumenides" began at Apollo's temple. Aeschylus was an Athenian man who wrote thirteen first place plays. He wrote this tragedy around 458 B.C. This play had some new innovations for its time period, such as a second actor, elaborate staging, and poetic diction. Aeschylus was in the navy at Salamis and ...Page 2took part in the Persian Invasion in 480 B.C. He died in 456 B.C., when an eagle dropped a tortoise on his head, crushing his skull. "The Eumenides" was a great play, as were the other two of the trilogy. The poetic words seemed to flow from the actors' mouths, maybe a little too much when the Furies spoke prior to the trial. The Furies were annoying throughout the play and had too many rambling speaking parts. However, the play contained a practical plot line that is still fit for today's society, even though it was written some 2,461 years ago. I enjoyed seeing how the people from long ago dealt with similar issues, which still haunt our society today. The plot appeared to flow steadily throughout the play. All of the various scenes streamed together and gave an insight into what life was like for Orestes. However, there wasn't much action throughout the play, but the lack of action was made up with suspense provided during the trial. Overall, Aeschylus did an excellent job writing the play. Throughout "The Eumenides" Aeschylus chose his words perfectly. The poetic words surged smoothly through the actors' mouths. Perhaps one of the most interesting parts was listening to how Aeschylus managed to make rhymes that lasted for a good five minutes, while still making sense. He also used excellent metaphors and similes to emphasize certain points being made during the trial. Although the words may have been offensive to some, they helped highlight the common thought most people had in that time period. The language was difficult to understand at first, but as the play went on, the language became easier to understand....Page 3Perhaps one of the best qualities about this play is how it relates to today's society. We are still forced to judge whether a person is innocent or guilty of murder. We still ask God for help and believe that God knows best for us. We also have a similar court system, such as the one the Athenians

The Same Then and Now

Published by Thriftbooks.com User , 18 years ago
The Oresteia Trilogy by Aeschylus is a detailed portrayal of a family's curse and the effect it takes on them. Aeschylus wrote this trilogy between 500 B.C and 456 B.C. when the great Greek plays were being written and performed by all Athenians. Aeschylus wrote many trilogies, winning approximately thirteen first place prizes at the festivals in March. He led a life of adventure participating in several wars, the most famous being the war at Marathon. Even though Aeschylus wrote this trilogy hundreds of years ago, it can still be related to life today in the 21st Century. As one reads the plays one can envision their own town or life in his work. For this reason it is regarded as a "Great Greek Tragedy" and no one here seems to be arguing. As The Oresteia Trilogy begins to unravel the reader begins to experience the lives and times of the characters. They are given an exclusive view into the minds and souls of each character as they contemplate each decision. Clytemnestra and the characters surrounding her were experiencing many of the trials and life situations citizens experience today. As the Trojan War raged on in the trilogy and the citizens dealt with the absence of husbands and fathers, our country also deals with the same situation and Iraq. Wives were constantly facing the thought of their husbands' deaths or infidelity. Even though Clytemnestra had different reactions to these than most women, she still felt and experienced them. Cyltemnestra's feelings weren't unjust; her instincts of Agamemnon's infidelity were truthful. As Agamemnon was unfaithful to his wife Clytemnestra, our culture also deals with many couples that cannot seem to be pleased with just one mate. When many of these affairs are revealed violence can erupt. Violence is also a major issue in this trilogy as it is in society now. The citizens of Mycenae dealt with murders, matricides, attacks, wars and many other violent behaviors. Citizens today cannot deny the existence of too much violence in the world. We are constantly reminded, by the media, of similar murders of family members, like those in the trilogy. The reader is also constantly reminded of the violence by the never-ending curse in the story. With violence comes death, and with death comes mourning. As Electra and her brother Orestes bring Libations to their father's grave, families around the world also bring flowers and offerings to their own loved one's graves in hope to let the spirits rest. But with murder and crime justice will soon follow. No reader can deny the vast similarities between our current judicial system and the system of ancient Rome. The similarities begin with a jury, plaintiff, defense, and a judge, and the list continues. The furies also represent things in modern times. As they were tyrants and inescapable reminders, they are like guilty consciences and constant reminders that follow criminals and victims today.

Orestes for the modern world

Published by Thriftbooks.com User , 21 years ago
As a professor teaching classics in Regents College Master of Liberal Studies Program, I am always looking for translations that will entrance my students and give them that sensation of the marvelous that many of them can find only in videos and MTV. Hughes' translation of "The Oresteia" is a perfect choice. Sure, there may be in some passages a lot more of Hughes than of Aeschylus, but if that's what it takes to reincarnate those ancient and bloody tragic figures, it's a price well worth paying. After reading this book, I think my students will see "The Sopranos" as just another soap opera.
Copyright © 2020 Thriftbooks.com Terms of Use | Privacy Policy | Do Not Sell My Personal Information | Accessibility Statement
ThriftBooks® and the ThriftBooks® logo are registered trademarks of Thrift Books Global, LLC