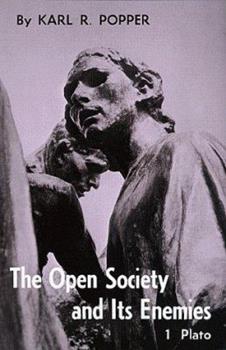 Open Society and Its Enemies, Volume 1: The Spell of Plato

(Book #1 in the The Open Society and its Enemies Series)

Popper was born in 1902 to a Viennese family of Jewish origin. He taught in Austria until 1937, when he emigrated to New Zealand in anticipation of the Nazi annexation of Austria the following year, and he settled in England in 1949. Before the annexation, Popper had written mainly about the philosophy of science, but from 1938 until the end of the Second World War he focused his energies on political philosophy, seeking to diagnose the intellectual...

Portrait of the Philosopher-King as an Artist

Published by Thriftbooks.com User , 15 years ago
When confronted with the rise of totalitarianism and the destruction of all that he held dear, Poper felt a single, overwhelming urge: to return to the Greeks, to the dawn of our civilization, so as to understand the root of the evil and to offer a practical way out of bestiality. His search was motivated by the insight that "this civilization has not yet fully recovered from the shock of its birth--the transition from the tribal or 'closed society', with its submission to magical forces, to the 'open society', which sets free the critical powers of man." Heraclitus set the stage with his claim that "the cosmos, at best, is like a rubbish heap scattered at random." If "everything is in flux" and "you cannot step twice into the same river", then at least we can try to discover the historical or evolutionary laws which will enable us to prophesy the destiny of man. Plato's claim to greatness is to have discovered such a law: that "all social change is corruption or decay or degeneration," and that the only way to break this cycle of decay is to arrest development and return to the Golden Age, where no change occurs. His belief in perfect and unchanging things, the Platonic Ideas from which all things originate, finds its expression in all fields of inquiry: be it social justice, nature and convention, wisdom and truth, or goodness and beauty. Behind these lofty ideals, Popper uncovers a discomforting truth: Plato envisioned the ideal Greek polity as a totalitarian nightmare, where the 'race of the guardians' had to be kept pure from any miscegenation and where the role of the rulers was to breed the human cattle according to some esoteric formula (the 'Platonic Number', a number determining the True Period of the human race). Along his apology of Sparta came his endorsement of infanticide and his recommendation that children of both sexes be "brought within the sight of actual war and made to taste blood." Popper demonstrates that these crazy ideas were not the vague mumblings of an otherwise sound philosopher: they were central tenets in Plato's philosophy, a system which has been characterized by another author as "the most savage and most profound attack upon liberal ideas which history can show." Popper connects this extreme radicalism of the Platonic approach with its aestheticism, i.e. with "the desire to build a world which is not only a little better and more rational than ours, but which is free from all its ugliness." Plato, the Philosopher-King, can be best characterized as an artist: a man attracted to a world of pure beauty, a craftsman who tries to visualize an ideal model of his work and to copy it faithfully, and for whom "the part has to be executed for the sake of the whole, and not the whole for the sake of the part." His desire to "start from a clean canvas" or his claim to prefer "the original to the copy" find disturbing echoes in contemporary political debates. Contrary to Plato's belief, however, the canvas can never b

Published by Thriftbooks.com User , 16 years ago
Popper wrote this book for me and for people like me, i.e. for people who stand in awe of Plato simply because he is Plato. I read Plato's Republic in 1985 or thereabouts. I had learned of the allegory of the cave in class and wanted to know more. Also, in one M*A*S*H episode, the Republic was among the books Frank Burns was burning, so of course I had to read it. I did, and apart from Book One's denunciation of the maxim "Might Makes Right", I felt uneasy about the rest of the work. At the time, I felt that there must have been something wrong with me, that I wasn't reading it right, that after all having stood the test of time for over two thousand years Plato simply couldn't be wrong. If only I had known of Popper in 1985! Popper is in many ways pointing out the obvious: that Emperor Plato is wearing no clothes. His Republic is nothing more than a totalitarian state and his value system represses the individual in favour of the State. Popper begins by describing what he calls "Historicism" or the belief that history develops according to laws from which the future could be predicted, with Heraclitus being the first "historicist". Popper then continues with an overview Plato's thought, especially his Theory of Forms and his brilliant sociological insights. He then exposes over three chapters Plato's political programme to bring about a perfect City-State, and here is where Popper points out the obvious: Plato's Republic is a totalitarian state that controls every facet of the lives of all its citizens and represses any every invidual path to happiness. In the last chapter, Popper sketches out how an Open Society would work and gives the example of Athens just before Plato. Unlike others who have savaged Plato (e.g. Ayn Rand) Popper doesn't lay out a master plan to replace Plato's. He doesn't believe in utopias, Platonic or otherwise. Popper believes in what he calls "Piecemeal Social Engineering" i.e. fixing problems as they come up, or improving institutions when the opportunity arises. This is Popper's Open Society. One where we accept that things are as they are, that they can be improved, that individuals are the only judges of their own happiness and that they should have complete freedom to pursue it as they see fit, insofar as they don't harm others too much. His test for an Open Society is very simple: a society is open if its government can change without bloodshed. In 1948, Scott Buchanan wrote, in the introduction to Penguin's Portable Plato, that "the reading of Plato's dialogues by a large number of people could make the difference between a century of folly and a century of wisdom for the world". Perhaps, but only if the reader approches Plato without awe and with a critical mind. As did Popper. Vincent Poirier, Tokyo

Published by Thriftbooks.com User , 16 years ago
Just bought this book (August 2005) to reread in response to current clash of ideologies over Iraq. This densely argued philsophical treatise offers exceptional insights into the history of philosophy, and into totalitarianism, fascism, communism, and religion. Those insights put a unique perspective upon the current clash between Western (nominally open) society and Christian and Muslim fundamentalism. This book places the "you are either with us or against us," "three strikes and you're out," and "zero tolerance" mindsets into perspective. I was first exposed to Karl Popper's ideas when he came to the University of Denver in 1964 to teach a course with this title to the Centennial Scholars Program. It is a great pleasure to reread this book and savor Popper's careful dissections: scientific method and scientific truths, and their relation to philosphical, religious, and societal norms. This book sheds much light on what is going on in the world today.

Published by Thriftbooks.com User , 20 years ago
This is a paperback in two volumes: volume I subtitled "Plato", and volume II subtitled "Hegel and Marx". Each volume has a table of contents, text, addenda, truly awe-inspiring endnotes, an index of names, and of subjects. This is a review of BOTH volumes."If in this book harsh words are spoken about some of the greatest among the intellectual leaders of mankind, my motive is not...to belittle them. ...we must break with the habit of deference to great men. Great men may make great mistakes..." (from the intro to the 1943 edition)Karl Popper was fighting the war in his own way. He saw what was essentially the same in Stalin and Hitler: a monstrous confidence. They may have drawn on different philosophies of the state, but it came to the same thing in the end: wholesale murder as a tool of social engineering.But WWII is over, and we won. Moreover, the Soviet Union has collapsed, and we won again. So what is the fuss? Relax: Marxism is dead, Platonism sounds quaint, and who the hell is Hegel, anyway? But don't rest easy just yet, free-market man! Every four years we seem to reaffirm our need for a philosopher-king. And while the historicist faith is now all tarted-up with computers, networking, and the Fable of the Bees and re-christened "emergent order", it still leaves us feeling smug and moral in doing nothing but tending our own gardens.Popper is pithy throughout, but I only started noting things (this time around) at the penultimate chapter of the work, 24:"... the fight against suffering must be considered a duty, while the right to care for the happiness of others must be considered a privilege confined to the close circle of their friends."(vII, p237)[on language, and the aim of rationalism] "... to use it plainly ... as an instrument of rational communication ... rather than as a means of 'self-expression', as the vicious romantic jargon of most of our educationists has it." (p239) See also II, pp276/7 on the aims of education.[On bullshit] "... irrationalism will use reason too, but without any feeling of obligation."(II,240)A brilliant look at Hegelian thinking in the sociology of knowledge (II,242/3), which must be read whole, but ends: " ... their thoughts are endowed ... with 'mystical and religious faculties' not possessed by others, and who thus claim that they 'think by God's grace'. This claim with its gentle allusion to those who do not possess God's grace, this attack upon the potential spiritual unity of mankind, is, in my opinion, as pretentious, blasphemous and anti-Christian, as it believes itself to be humble, pious, and Christian."Popper is relentlessly brilliant in moral indignation. See his pointing out that moral futurism (e.g. 'the meek shall inherit the earth') condones the abdicating of individual moral responsibility, since one need do nothing toward this certain end. His answer: "...it is certainly possible to combine an attitude of the utmost reserve and even of contempt towards worldly success in the sense

The Greatest Book of the 20th Century?

Published by Thriftbooks.com User , 21 years ago
I think the title of this review is a true description of this book, but I urge you to judge for yourself. My only regret is that I did not read it many years ago when my head was turned by the siren calls of what Popper calls 'tribalism'. Even then I heard about it and had it pooh-poohed as 'old hat' by 'advanced' thinkers (self-styled!). Often misinterpreted as an attack on Plato, Marx and Hegel, it is in reality a stirring defense of democracy and liberalism, written at democracy's darkest hour. Now that Marxism has collapsed, Popper in an interview given before his death called for us now to look for the 'roads not taken', admitting that embattled western liberalism became, to a certain extent, an unquestioned dogma like its opponents. A good place to start that search is with Popper's greatest book.
Copyright © 2020 Thriftbooks.com Terms of Use | Privacy Policy | Do Not Sell My Personal Information | Accessibility Statement
ThriftBooks® and the ThriftBooks® logo are registered trademarks of Thrift Books Global, LLC