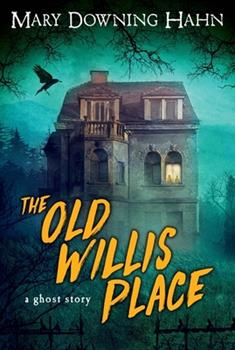 From master storyteller Mary Downing Hahn, a chilling ghost story rich in secrets and surprises, in the tradition of her most successful spine-tingling novels. Mary Downing Hahn weaves a tale of two children who live near a decaying Victorian mansion, bound to the place by a mysterious set of rules. Only by connecting with the new girl who moves into the old Willis place can Diana and little brother George be free--but making contact with this girl...

One of my Favorites for Spooky Season

Published by Paige Christine , 1 month ago
I first had the pleasure of reading this book in fifth grade, I'm now 24 and have read it again and again. It is a bit spooky so I wouldn't let someone read it if they get scared easily. The book is written so beautifully that when reading the scary parts you can clearly see the picture in your head. Give it a chance!

Published by Thriftbooks.com User , 3 years ago
my absolute favorite book by Mary Downing Hahn! a wonderful ghost story from a flipped perspective. Instead of seeing the story from the newcomers point of view, you see the story from the ones who have been lurking in the shadows for a long time. Perfect for kids age 11 and up if they like mysteries, especially if they have rowdy siblings!

Published by Thriftbooks.com User , 14 years ago
The Old Willis Place is an interesting book that you should read. It starts out fun and funny but at the end it gets so misleading, disturbing, frightening, and unexpected. Can you really say why the children died? Or what happened to Mrs. Willis, or even who she really was? It all ties up in the ending and that's what got me hooked to this wonderful book. This book, The Old Willis Place, is a creepy mysterious book that ties up in the end. This book takes place on Mrs.Willis' farm. Diana and Georgie have many rules they must obey and they try to figure out their own cause of death. During this process they meet a friend, Lissa, and her father Mr. Morrison. This was a problem because in the rules no one was allowed to see them. But Diana and Georgie were so lonely they have been with each other and only each other for such along time. Their friend found Diana and Georgie to be very suspicious but at the same time trustworthy. This was misleading and not understandable but Lissa wanted a friend too so much that she would do anything. Besides she thought that is what made them interesting. Diana was dying to tell who she really was, where she really lived, and how she got here in the first place to Lissa but she couldn't that was against the rules. The two girls ended up to be close friends and for that matter they called themselves," Friends forever". But Lissa didn't know that soon Diana would be going far away. Since she had no idea of who Diana and Georgie really were, she just concluded whatever she wanted them to be. For example a strange religion because she acted so strange and had so many rules. She also made up that she was a vegetarian since she was never hungry nor thirsty. Diana would just say," Oh yes" or "Sure" to whatever Lissa said. An interesting, frightening conflict they had that kept popping up was that Mrs. Willis was haunting Diana and Georgie. The way she got up from her death sleep was that Lissa opened the door she died. She did not want Lissa she wanted Diana and Georgie because of what they done in the past. They disobeyed all the rules possible. Disobeying is a very big risk but Diana took it all for a friend. Mary Downing Hahn is a great author to read your first mystery book. Especially this book, I could never put this book down. The Old Willis Place is also very descriptive and gets you hooked the first paragraph you read. I loved this book and I bet you will too!

This is a Spine Chilling Ghost Story!

Published by Thriftbooks.com User , 14 years ago
This book is very scary but very interesting. I read it in my classroom at school and I really liked it so I want to buy it and read it with my mom because. I think you should be 8 or older to read this book because it gets really scary, but don't worry it ends in a good way. If you like ghost stories yo should read this book in the drak, in your bed with a flash light with the blinds closed. It will make the story seem a lot scarier and it will make it more fun to read! (this is how we read it in class) Well if you read this book I hope you enjoy it, I know I did!

Published by Thriftbooks.com User , 15 years ago
Mary Downing Hahn's book The Old Willis Place, is a ghost story like no other. Hahn perfectly illustrates all mental images. You could picture exactly what Oak Hill Manor looks like, or even the Caretaker's Trailer and the River Hideout. If you are looking for a ghost story with a happy ending, then this is the book for you. Georgie and Diana live in a tin shed in the woods by The Old Willis Place. Even though they have no parents, they still must obey the rules embedded in their minds long ago. Their favorite thing to do is to scare the Caretakers so much that they leave Oak Hill Manor; usually they are old and grumpy men. But, this time it's a middle-aged man with a daughter named Lissa. Diana does not yet know how much Lissa will change her life. Then one day, the thing that Diana and Georgie most fear is released, the ghost of Miss Lillian. She comes looking for them to punish them for what they did to her long ago. This book will have you on the edge of your seat from the beginning to the heart-wrenching end that will emotionally slap you in the face. The Old Willis Place is an appropriate book for all ages, though it might be scary for people who thought that some of her other books like Time For Andrew and Wait Till Helen Comes were scary. This book is at the top of my list, and once you read it, it will be at the top of your list too.

Published by Thriftbooks.com User , 15 years ago
Mary Downing Hahn has done a fabulous job with "The Old Willis Place: a ghost story." From the first chapter, I was intriqued to discover the secrets of the old farm. Diana and Georgie are two children who reside at the old Willis farm. They have been there for many, many years, and there is an air of mystery about them from the beginning. A new caretaker is moving in to take care of the old farm, one of the many Diana and Georgie have seen come and go; however, this one is different. He brings his daughter, Lissa, to the old farm with him. Diana longs to have a friend. She and Georgie watch Lissa from afar and finally Diana shares her wish with Georgie. He becomes angry and reminds her of "the rules." These rules appeared in Diana and Georgie's mind after the bad thing happened. Diana and Georgie are not allowed to be seen by anyone and cannot leave the farm. With each turn of the page, the reason for these rules become clearer. And, with each turn of the page, Diana wants to become friends with Lissa. At last, Diana shows herself. She and Lissa become friends, but Diana has broken a rule. The events that happen afterward are indescribable. You wouldn't believe it unless you read the story yourself! I would recommend this book to anyone who enjoys a good ghost story. The characters, plot, and setting are all extremely well developed. I found myself trying to stay awake for one more page, something I had not done in a very long time. I could not put the book down, as it has a spellbinding effect. Even though this book is found in the juvenile section, I think everyone from 4th grade to old age will find something in it that they enjoy!

Published by Thriftbooks.com User , 16 years ago
The following review is from my 10 year old nephew: "This book is an amazing book with lots of scary twists inside of it....it even gave me nightmares. It is the best ghost story I have ever read. The characters were very brave and went to any lengths to sustain a friendship."
Copyright © 2020 Thriftbooks.com Terms of Use | Privacy Policy | Do Not Sell My Personal Information | Accessibility Statement
ThriftBooks® and the ThriftBooks® logo are registered trademarks of Thrift Books Global, LLC