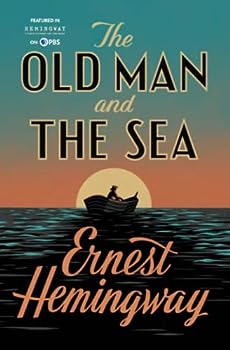 The Old Man and The Sea, Book Cover May Vary

Told in language of great simplicity and power, this story of courage and personal triumph remains one of Ernest Hemingway's most enduring works. The Old Man and the Sea is one of Hemingway's most... This description may be from another edition of this product.

Published by Adam , 3 months ago
Direct, easy to read. Finished in a day. Definitely makes me want to read more from Hemingway

Not The Same Cover That I Thought I Was Getting

Published by Nik , 1 year ago
First off, I loved reading The Old Man and the Sea. The story itself would have gotten 5 stars. However, I payed more money than I would have (about $12 more) because I thought I was getting a specific cover that I really liked. When I received my copy, I was very disappointed.

Published by Cam , 1 year ago
This book is so marked up by the previous user with highlighter and pen it’s unreadable. Love the book itself but can’t get past all the random pink highlights and pen markings.

Not same cover that was shown

Published by Kme , 1 year ago
I hate it when the cover of the book shown is not the one you received. Although the book is in good condition, I just thought I was receiving a different book.

A classical novel everyone should read.

Published by Iguana0983 , 3 years ago
The struggle is real and goal oriented. Could be used in life for those who fight enough with due diligence you might get what you want. Always a price to pay.

The Old Man and the Sea is a must.

Published by Thriftbooks.com User , 4 years ago
This is one of those books that gives off a really good message, the first time I read it was a few years ago and decided to buy it to have my own copy, unfortunately I ordered it in "good" and it had a bunch of hilighted sentences and some random words with a bunch of questions written in pen within the margins.

It will always be one of my TOP FIVE FAVORITE BOOKS

Published by Thriftbooks.com User , 13 years ago
This is the first book I ever remember reading that I struggled to put down. The baseball allusions, especially those of Joe DiMaggio, hooked me. Of course, I also had to keep rooting for the underdog Santiago. The boy's loyalty is honorable, and Santiago's determination is inspiring. Friends ask me how I can love such a depressing book, and all I can say is that the book was never depressing to me. It was a feel good book for me from cover to cover. Perhaps, it might have something to do with the way I celebrate the conflicts in my own life while gaining strengh from my own successful failures.

the old man and the sea

Published by Thriftbooks.com User , 14 years ago
Everything was spelled out for me and I felt well informed about the book's condition. It is in good condition and I appreciate the seller's input about it.

Life is hard, but worth fighting for

Published by Thriftbooks.com User , 18 years ago
Aside from a few short stories, "The Old Man and the Sea" is the first Hemmingway book that I have read. Of course, I am familiar with his persona, and the idea of the "Hemmingway man," and was well aware as his stature as one of the greatest writers of modern times. But I had never read his books. Wow. I mean, really. Wow. With "The Old Man and the Sea," it is so easy to see why Hemmingway was awarded the Nobel Prize, and why he deserves all of his accolades. This short novel is fierce, full of vibrant energy and humanity, all the while being a slave to the realities of finite power, of the inability to struggle against something greater than yourself. Of course, this is the standard "man against nature" story, but it is told with such craft that even cliches ring true. Santiago is a fully-realized character. His strength of will is all that holds together his failing body. The great marlin that he struggles with is like a true fish, lacking personality or anthropomorphism, but just a powerful beast that does not want to die. There is no Moby Dick animosity, and the fish is under the water for the majority of the struggle. All of it, the sharks, the flying fish, the small boat and the ocean, each is what it is, lacking metaphor and saying that life itself is enough. No need to wax poetic. I never knew a story a little over 120 pages could pack such a punch.

Published by Thriftbooks.com User , 20 years ago
The Old Man and The Sea is perhaps one of Ernest Hemingway's finest achievements. Here you will find the lean descriptive prose that made him one of the finest writer's of the twentieth century.It tells the story of a fisherman who is down on his luck, but whose spirit is strong as the tropical winds that have tanned his skin and the sun that has made weak his eyes. He is devoted to the sea and knows all of its wildness and subtle moods. He goes out alone one day without his sidekick boy companion, because the boy's family has forbidden him to help his teacher for he has bad luck.He hooks a Marlin, a huge mythical Marlin, the kind that fishermen only dream of catching. And the fish drags him out deeper and deeper into the ocean, farther than he's ever traveled. The battle is fierce and his hands are even bloodied as he ties himself to the rope and the fish in a struggle that is somehow symbolic of man's eternal quest to gain control over natural forces.I would say more, however, Hemingway has done such a fine job that I suggest you read and read this wonderful tale. The ending is of course classic Hemingway. And it was for this book that Hemingway won the Nobel Prize for literature.

Published by Thriftbooks.com User , 21 years ago
What an incredible story. I read this in less than two hours (it is a novella) and upon completing this simple story, I had a incredibly overwhelming satisfaction toward the ferocity of the human spirit. Yes, this book is all story but the main idea is all spirit. Those that can't see the incredible battle within are not READING the story, just the words. As a simple by-product, this book led directly to Ernest Hemingway's receipt of the Nobel Prize in 1954. This story features three main characters: the old man (Santiago), a young boy (Manolin), and the human spirit. Santiago takes on the once-in-a-lifetime catch of a prize marlin which is described and portrayed in a manner to draw out the challenge facing each individual, both physically and emotionally. Santiago hasn't had a catch in 84 days. On day 85, he decides that, no matter what, he'll not return with a catch. Indeed, that was his fate. Santiago experiences physical pain, emotional pain, spiritual pain, and the pain of being alone with the elements. Yet, he continues on, creating hope where there is none. Before this story reaches it conclusion, getting right with life, Santiago decides it is he or the marlin.This story is incredible. It deserves(d) all the critical acclaim received. Once again, those who didn't find this story touching their soul didn't read the story.

The Old Man and the Sea Mentions in Our Blog 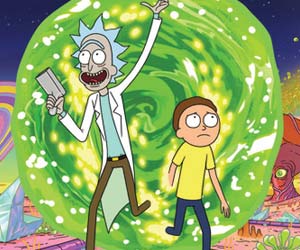 A Season-by-Season Guide to Rick and Morty
Published by Ashly Moore Sheldon • August 28, 2022

A new season of the wildly popular animated sci-fi sitcom, Rick and Morty, premieres on September 4. The darkly funny show is packed with interdimensional action, pop culture references, and celebrity cameos. Catch up on past seasons and boost your viewing pleasure with some stellar accompaniments.

Literary giant Ernest Hemingway was a bullish character who captured the public interest with his colorful life. An ardent adventurer, he poured his experiences into rich, stirring tales, written in his singular, understated prose. To celebrate his birthday, here are seven surprising facts about the iconic figure.

Drink Your Books in These 9 Literary-Themed Bars
Published by Beth Clark • February 08, 2019
Literary-themed bars across the US beg the question: Are you really alone if you're with the spirit(s) of your favorite authors or books? We don't think so. (And we're betting you've taken a book into a bar before.) Below are 9 establishments bookworms can drink their books in or even borrow one from the bar's library to read while sipping a cocktail.
Read Article
Trustpilot
Copyright © 2022 Thriftbooks.com Terms of Use | Privacy Policy | Do Not Sell or Share My Personal Information | Accessibility Statement
ThriftBooks® and the ThriftBooks® logo are registered trademarks of Thrift Books Global, LLC