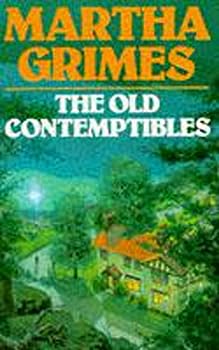 (Book #11 in the Richard Jury Series)

This description may be from another edition of this product. Did Jane Galloway commit suicide or was she murdered? Melrose Plant attempts to determine the identity of Jane's mysterious visitor on the night of her death. Was it Alex's sultry grandmother,...

A mystery for poets...

Published by Thriftbooks.com User , 12 years ago
This is the 11th book in the Richard Jury Series (although you could also say it's the 11th book in the Melrose Plant series, since Melrose, ex-earl, is Jury's partner in solving the crimes. This one takes place up in Lake District, where all the great British poets once lived. There is a family, the Holdsworth family, that seems to be plagued with too many accidents, too many suicides. Again, like in Jury mysteries of the past, Grimes gives us an extraordinary child. In fact, there are two such children, Alex and Millie, around whom the mystery circles. My favorite characters in this book is not the children but the two old coots--Adam Holdsworth and Lady Cray--living in Castle Howe retirement home. So, if you are in the mood for a good mystery, grab a cup of tea, a volume of Wordsworth, and this Jury mystery and have a great evening!

Better than most in this series

Published by Thriftbooks.com User , 13 years ago
In most regards, this 11th volume in the Supt. Richard Jury mystery series is perhaps the best so far. Jury has gotten involved with Jane Holdsworth, a young woman he met at the Camden street market and after only a few weeks, he's seriously considering proposing marriage. Then she turns up dead on her sofa, an apparent suicide, and Jury is one of the suspects.The body was discovered by her 16-year-old son, Alex, who is something of a genius when it comes to scamming bookies and other gamblers. And Alex is convinced his mother must have been murdered. Because Jury is under suspicion, Melrose goes off to investigate the victim's family in the Lake District, and it's he who actually is the focus of most of the book, not Jury. Several other questionable deaths have been connected to the family is a short period of time. Alex's great-grandfather, Adam, who prefers to spend most of his time at a plush retirement home down the road rather than with his avaricious family, has his own thoughts about the various deaths. So does Lady Cray, Adam's astute and steely-eyed friend. And so, especially, does Milly, the Holdsworth family's twelve-year-old cook, whose mother was yet another suicide (or murder) tied to the Holdsworth family. There's a good deal of Grimes's wry humor here, and much better plotting than usual, but the author still has a penchant for killing off the villain at the end of the book instead of letting the law take its course. But there are still a few holes. For instance, who the devil paid for Jury's expensive attorney, if it wasn't Vivian?

Published by Thriftbooks.com User , 13 years ago
Great read. Martha Grimes mysteries are well written and the characters in them fascinating. Terrific for English cozy mystery fans.

Published by Thriftbooks.com User , 15 years ago
This was a very interesting and good book with alot of great mystery to it.

Curry and Grimes are magic!

Published by Thriftbooks.com User , 17 years ago
In #11 of the Jury-Plant mysteries, finds Jury a suspect himself! The delightfully droll British Mysteries - named after Brit Pubs - see this one taking place in the beautiful Lake District. Jury is considering marriage with a widow Jane Holdsworth. Things become complicated when son Alex finds Jane dead. At first it's deemed a suicide, but it becomes clear it was murder. Since Jury is a suspect, he sends Melrose Plant to the Lake District to suss out what he can about the Holdsworth family. The family is rich and eccentric, but four murders in one family is just a wee bit beyond the pale. The Holdsworth family is loaded with delightful, charming, if oddball characters, such as Alex, who is quite adapt at cheating at poker. Curry shines when doing 11-year-old Millie Thale (Melrose always has a soft spot for dotty children). Millie has a bond with Alex, since her mother died unexpected five years before. Grimes once again brings such quirky characters to life with her witty prose and Curry takes those words and makes magic! A winning combination not to be missed.
Copyright © 2020 Thriftbooks.com Terms of Use | Privacy Policy | Do Not Sell My Personal Information | Accessibility Statement
ThriftBooks® and the ThriftBooks® logo are registered trademarks of Thrift Books Global, LLC