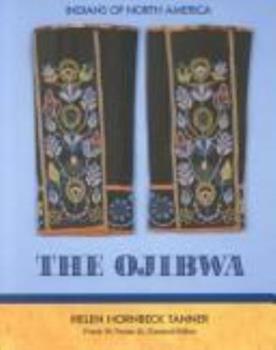 Examines the culture, history, and changing fortunes of the Ojibwa Indians. This description may be from another edition of this product.

Published by Thriftbooks.com User , 16 years ago
With this look at "The Ojibwa" in the Indians of North America series I finally get to one of the Native American bands from my particular neck of the woods. The Ojibwa originally settled around the eastern end of Lake Superior and the north shore of Lake Huron five centuries ago, where they thrived fishing, hunting and foraging around the Great Lakes. Things began changing for the Ojibwa in the early 17th century when French fur traders first arrived in the area and trading pelts for European goods became not only a key part of their economy but a reason to competing with neighboring tribes for hunting grounds. Consequently, when the United States and Canada began trying to concentrate Native Americans on reservations and reserves, the Ojibwa were one of the most widely dispersed tribes, which is why today they are found in not only Wisconsin and Michigan, but also in Minnesota, North Dakota, and Montana, as well as Ontario, Manitoba, and Saskatchewan north of the border. Consequently, the story of the Ojibwa is of a people who have managed to carry on their cultural heritage despite the changes that have been brought by contact with white settlers and governments. Helen Hornbeck Tanner, author of "The Ojibwas: A Critical Bibliography," tells the story of the Ojibwa in seven chapters: (1) Coming to the Great Lakes begins with the creation story of Kitche Manido, the Great Spirit, and then tells how despite inhabiting so many different regions the Ojibwa still share their unique identity as Anishinable, the creations of Kitche Manido. (2) A Culture of All Seasons looks at what we know about the daily lives of the Ojibwa in the past based on what was recorded by the Europeans who first came into contact with them. The accompanying illustrations are by Seth Eastman and other artists who visited the Ojibwa around 1850, along with photographs from the early 1900s. (3) Trading with the French tells of how the life of the Ojibwa changed after making contact, with tribe defeating the Ojibwa, Sacs and Foxes, and Sioux to both preserve and expand their territory. This is continued in (4) Fighting Off Competitors, which includes the French & Indian wars period and a map of Forts and Ojibwa Villages, 1720-61, that shows where the French and British had their forts and trading posts from Minnesota to New York (I am not sure if I have ever seen a map this detailed on the subject before). There is also a map of Tribal Distribution circa 1768 that shows the Ojibwa at what must have been their greatest expanse. Following the War of 1812 things began to change as the American government began a long effort to control the tribes of the Great Lakes region. (5) Enduring "Civilization" looks at the consequences of the Ojibwa in American territory becoming extremely dependent on American traders. This time the map is of Land Cessions from 1783 to 1873, again an excellent way of showing the changing fortunes of the Ojibwa and other native peoples. (
Trustpilot
Copyright © 2022 Thriftbooks.com Terms of Use | Privacy Policy | Do Not Sell or Share My Personal Information | Accessibility Statement
ThriftBooks® and the ThriftBooks® logo are registered trademarks of Thrift Books Global, LLC