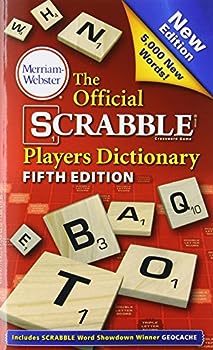 This description may be from another edition of this product. The book that millions of SCRABBLE players consider the only necessary resource. Features more than 100,000 playable two- to eight-letter words including many newly added entries. Updated to include...

Published by Official Scrabble Players Dictionary , 2 years ago
In my 90s and play lots of scrabble. This is brain exercise. The book is the authority if a word is challenged.

Published by Thriftbooks.com User , 16 years ago
For about 50 years, I have been a veteran Scrabble Player and have participated in many tournaments, as well as playing on line, internationally. The updated edition of OSPD is excellent, because they separated special sections with prefixes, making it much easier to find your way around. The only complaint I have is that the delivery charges were much higher than the book, forcing me to rely more on local or second-hand books.

Published by Thriftbooks.com User , 17 years ago
You have to have this dictionary to play scrabble because it lists the acceptable words that can be used. It's especially important when playing with people who don't play as often because some of the words you remember when playing scrabble are obscure so people will challenge you until they get burned a few times. It's also important because people will try to make up words that don't exist so when you challenge they lose their turn if you refer to the official dictionary. This edition is not the "official, official" word list because it's for recreational and school play. So naughty words are not in it that should be. Nevertheless, it is important to have handy when playing.

Using something else? You're not playing by the rules.

Published by Thriftbooks.com User , 17 years ago
One cannot truly compete if they aren't doing so by a clear and concrete set of rules. Without one, the competition in question becomes compromised, and, therefore, a farce. While every game of Scrabble includes a rule book of sorts, a dictionary is also needed to play, and every avid player knows that not all dictionaries are alike. Words are in one that aren't in another and vice versa. So, which one is telling the truth? There is no right answer to that question, but here's the solution. The authorization of this particular dictionary by the makers of Scrabble, along with an endorsement by the National Scrabble Association, make it an extension of the rule book itself, and it, in turn, makes the rules clear and concrete. Now, we can compete!

Don't play without it

Published by Thriftbooks.com User , 18 years ago
The OSPD is no ordinary dictionary. There are capsule definitions given but no usage tips. All the entries are in caps. Since there are no proper names allowed, this doesn't matter. The most important information about the entries (from the point of view of the Scrabble player) is how they are spelled, how they are made plural, how the gerund and past tenses are formed, and whether you can make comparatives or superlatives out of the word and how.For example the plural of "bijou" (a jewel) is either "bijoux" or "bijous," and the OSPD gives that info. The gerund of "snib" (to latch) is "snibbing" while the comparative of "sleazy" is "sleazier" and the superlative, "sleaziest." There is also the adverb, "sleazily."The -er form of a word is listed separately. If you don't find it, it's not a word!--or at least that should be our agreement. For example "renown" is a noun and a verb but there is no "renowner"--"someone who makes renown" since the verb is intransitive, but there is a "tearer"--"one who tears." (There's also a "terror," but never mind.)By the way, words beginning with the prefix "re" as in, e.g., "reword" are listed separately from words that begin with the "re" that is not a prefix. Again, "renown" is not listed after "rename" but follows "renovate" a few pages later.The other peculiarities of the entries are explained in the Introduction, which I highly recommend you read. (Be sure your informed opponent has read it!) There it is explained why "You should look always look at several entries above and below the expected place..." when searching for the word in question. You should also read the brief Preface in which the editors explain why some offensive (especially four-letter) words do not appear. Note too that words longer than eight letters (and indeed one-letter words) do not appear (except for some inflected forms) because they are seldom if ever used in a Scrabble game. Of course most veteran players have on occasion played a very nice nine-letter, double triple-word, 50-point bonus word. I did myself once. I wish I could remember what it was.For casual players, who typically use a collegiate dictionary to settle spelling disputes, the contents of this little green book will come as something of a shock. You mean "zax" is a word? How about "zek"? Can you believe "jefe"? This is just to name three off hand that are not in the Random House college dictionary I have in front of me.There are in fact in the OSPD seven words beginning with a "q" not followed by a "u" (qaid, qanat, qat, qindar, qintar, qiviut, and qoph--in case you're in the middle of a game). Don't laugh. In some households there is a Scrabble game going on at all times just as in some other households the TV is always on. Random House's college dictionary doesn't give "qaid" or "qanat" but surprisingly has "qadi" which is not given by the OSPD.I think Scrabble has influenced dictionary compilers because if you look at the Merriam-Webster (the

A must for scrabble players

Published by Thriftbooks.com User , 18 years ago
As a casual Scrabble player and enthusiast, I knew that I wanted to get an official source of all the Scrabble words. After purchasing this dictionary, I'm confident that I have the definitive source of all the 2-8 letter words that you can play in Scrabble.This book does have some shortcomings, though. Some of the definitions are really weird. For example, when I looked up matilda it said something about a hobo's travelling bag. When I looked up the word in the dictionary the definition was different. The definitions of words are usually quite obscure. If the word can be used as a verb then that form is used. Another thing I don't like about this dictionary is the font of the words. Every word is listed in capital letters only (AARRGH). That makes it harder to memorize. Overall, this is a good book though. This paperback edition is convenient and a bargain. It's portable, perusable, and pliable. There are enough words here to quench the thirst of any word freak. I have already learned some new and interesting words like goliard, otalgia, zyzzyva, and matilda. I frequently peruse this dictionary and there's always a new word to learn. This dictionary has more words than I can handle and it's mind boggling how someone can memorize these words. From the obscure to the archaic, this dictionary will provide you words that will give you an edge in playing Scrabble.
Copyright © 2020 Thriftbooks.com Terms of Use | Privacy Policy | Do Not Sell My Personal Information | Accessibility Statement
ThriftBooks® and the ThriftBooks® logo are registered trademarks of Thrift Books Global, LLC