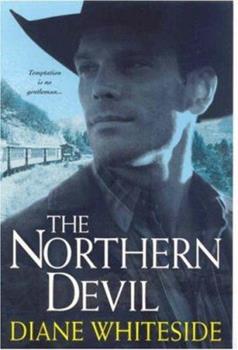 Every woman needs a devil by her side. Rachel Davis would rather risk death than remain a prisoner of the ruthless man intent on gaining her inheritance. Trapped on a private train with the villain, she makes a desperate bid for escape and runs into the arms of an unlikely savior. Aristocratic, arrogant, and deeply cynical about love, Lucas Grainger is her last choice for a husband--even a husband of convenience. But desperate times call for desperate...

Published by Thriftbooks.com User , 13 years ago
I love how these stories have such bad guys, that are truely evil. I love how the story goes so fast, you do not realize how much you read ubtil it is akmost over, it is that good. It is an rasy trad and the suspense is pratically unbearable and the love sceans are great. I also like how the cgaracters are all human, not super anything, just regular people dealing with evilness in people.

Published by Thriftbooks.com User , 14 years ago
After the death of her husband, Rachel Davis is held captive by Albert Collins; the principle trustee of her deceased husband's estate. Collins plans to force Rachel to marry his despicable son in order to gain unfettered access to the Davis Trust. Rachel has only person to turn to, her fiend, Lucas Grainger. In order to save Rachel, Lucas will have to break a vow he made to himself. A vow he swore he'd never break. Of all the women in the world, Rachel is the one woman that Lucas would consider breaking his vow for. Oh la la! The Northern Devil is moan out loud hot! I love Diane Whiteside's historical romances because she always manages to break my hot-o-meter. The Northern Devil is blazing inferno hot! Thank you Diane Whiteside for giving me a historical romance that is full of wickedly heated passion! Annmarie Reviewed for Joyfully Reviewed

Published by Thriftbooks.com User , 14 years ago
Rachel Davis, a young wealthy widow, has become a prisoner of Albert Collins a ruthless Trustee of the Davis estate and his perverted and abusive son Maitland. They are determined to take complete control of the Davis estate by forcing Rachel to marry Maitland. Whisking her across the country in a private railroad car Rachel has made several brave attempts at escape and has at last fought her way free. Alone in a very bad part of town she knew it would only be a matter of time before she'd be captured again or worse. Luckily, that didn't happen. Unbeknownst to her, Lucas Grainger, a steadfast friend of her late husband, stumbled across the plot and had been trying to track down Rachel and the Collins' trail as they dashed across the states. Lucas had always been adamant of never marrying, but after rescuing Rachel knew the only way to legally protect her was to marry her. Lucas held deep secrets that haunted him, but Rachel was a vision that aroused his deepest passions as none had ever done before. He would do whatever it took to keep her safe and anyone who chose to cross him would most definitely... have the devil to pay! *** Whiteside continues her `Devil' series which has garnered a large fan base. Using her formula of adventurous widows and persecuted woman finding their heroes as well as instructors in very torrid sensual delights she has captivated a huge audience. While THE NORTHERN DEVIL started out on the slow side, the author used a device in going backwards in time to show bits and pieces about the lead characters history in where they met, their interactions with one another and to set the stage for involvement in one another's lives for what then turned out to be a fast-paced and deliciously sensual adventure. Rachel was shown to be quick-thinking and resourceful in planning the escape of her mother and sister from the evil talons of the Collins family. She knew that if they were free, they could no longer be used as pawns in the evil machinations of forcing her into a marriage that would be intolerable. Her eventual harrowing escape from the vicious Maitland was an edge of the seat thrilling accomplishment that I actually cheered out loud! Lucas was divine, a strong handsome devil who would do anything to save the life of his best friend's widow, even if it meant going back on solemn oaths he'd sworn to himself of never marrying. He had corresponded regularly with Rachel and Elias and respected her for the loving care she'd shown to his friend. Even knowing that she might never love him as she did Elias, he was ready to lay down his life to keep her safe, never realizing that their union would end up as passionate and erotically pleasing as either could ever imagine. Whiteside's should score big with this highly sensual and erotic adventure, with leads that will have you cheering them on as they serve just desserts to their evil foes. Bringing back characters from previous books in the series only heightens the ple

Published by Thriftbooks.com User , 14 years ago
Lucas Grainger is attending the marriage of his close friend and one time supervising officer. For several reasons Lucas has decided that he will never marry. This vow has cost him heartache in the past but Lucas is steadfast. Besides, he has seen very few happy marriages; not even his mother and father are happy. He plans to keep this promise to himself and just be content with having his only female friend be Rachel Davis, the woman whose marriage he is witnessing. Years later, Lucas again runs into Rachel Davis. This time she is widowed and has been imprisoned by two unlawful men intent on stealing her widow's portion. When Lucas rescues her, Rachel confides to him that the only way to save her inheritance from her dead husband is via marriage. With marrying Lucas as a last resort, Rachel and he decide to wed. What starts out as a marriage of necessity and convenience turns into so much more. Neither Lucas nor Rachel realize that in saying vows to each other, they will each find the love they have needed for so long. With danger still afoot and vindictive men intent on doing Rachel harm, it is up to Lucas to protect his bride. Protect her he will. For the men chasing Rachel to get to her, they will have to get past Lucas first. Having been hooked on Diane Whiteside's westerns since the release of The Irish Devil, I found myself anxiously anticipating THE NORTHERN DEVIL. Perusing the coming soon pages of her website, I worried that in my complete enthrallment with this series that I would be disappointed once I was finally able to read THE NORTHERN DEVIL. That was not the case and as I sat down, opened the book, and began to read my heart settled, my pulse slowed and I found myself drawn into Lucas and Rachel's story. What a tough man Lucas wanted to be! Taking the blame for things that happened years ago to two women in his life, Lucas is unwavering and adamant that he will never marry. I loved watching him break that vow and then some. Rachel is his perfect match. She is intelligent, independent, and most importantly, she and Lucas are friends. THE NORTHERN DEVIL was everything I wanted it to be and more. Treated to another look at the characters of William and Viola Donovan from The Irish Devil, I thought the story flowed throughout the book and not once did my attention waver. THE NORTHERN DEVIL is utterly captivating. Even if you are not a lover of western romances, this book is definitely worth reading. THE NORTHERN DEVIL is not to be missed.

Railroad race in America in the 1870s

Published by Thriftbooks.com User , 14 years ago
This book is a great read as we follow our central characters travelling across America by train in bad weather. Lucas Grainger has sworn never to take a wife and has forged his own life path different to the expectation of his parents; Rachel Davis is a young widow whose life is in danger because of the money her first child will inherit. When she is kidnapped by a villain, Mr Collins, who preparing to forcibly marry her to his son, she realises how unsafe she is as an unmarried woman with so much money at stake. When she escapes and bumps into Lucas, someone she has known for five years, it seems sensible for them to marry each other. In fact Lucas comes to terms with this major life decision surprisingly quickly considering he has vowed never to marry! However Mr Collins and his evil son Maitland are continuing to plot, this time against Donovan, a friend of Lucas's, who is on his way to inspect a silver mine and is walking into a trap. Telegraph messages don't seem to be getting through to Donovan so Lucas and Rachel begin a race across America with their Pullman train to warn him. Unfortunately Collins and Maitland are on an earlier train with a snowplough and as the weather sets in and railway personnel are bribed to hinder Lucas's train and endanger the lives of many passengers it seems less likely that they can reach Donovan's mine in time to warn him. The writing and descriptions of the travels in this book are very enjoyable. The world of the rich with their personal train carriages was fascinating, as was the way that money and bribery seemed to work so effectively! We learn a little about Lucas and Rachel and the hang-ups that they each bring to the marriage but in some ways these were rather easily overcome. Sometimes the plotting seemed a little loose, for example Rachel is remarkably good at escaping from custody and the delays that Lucas's train experienced somehow didn't make as much difference at the end as one would have thought, but the story carries you along so these aspects don't matter too much. Characterisation isn't particularly strong in that the reader doesn't feel that they really know the characters by the end of the book, the text sometimes not helped by the point of view changing mid-chapter with no warning, but the interest of the setting makes up for a lot of this. This isn't an unputdownable book but it's an enjoyable read about a rough and difficult time in history. [...]
Copyright © 2022 Thriftbooks.com Terms of Use | Privacy Policy | Do Not Sell My Personal Information | Accessibility Statement
ThriftBooks® and the ThriftBooks® logo are registered trademarks of Thrift Books Global, LLC