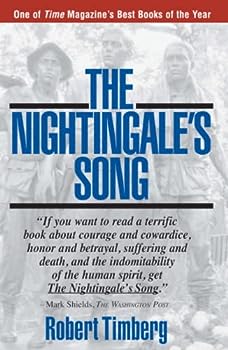 Robert Timberg weaves together the lives of Annapolis graduates John McCain, James Webb, Oliver North, Robert McFarlane, and John Poindexter to reveal how the Vietnam War continues to haunt America.... This description may be from another edition of this product.

The Best and the Brightest go to War.

Published by Thriftbooks.com User , 18 years ago
Robert Timberg has written a deeply compelling and somewhat tragic account of five men and how Vietnam shaped and molded their respective character. The book moves quickly and is irresistable after a few pages. A real page turner. Of all the characters within the book, John McCain comes out a real live American hero. Olliver North does not fare so well. Had North retired after his Vietnam stint there wouldn't be enough accolades to describe his service. However, ambition makes a fool of those who cater to its excess and North dives in head first without checking the depth of the water below. Some have criticized Timberg's work as "Anti-Reagan". That is not a fair depiction of the work. Reagan comes across as the "Nightgale" in the book's title. The fact that the song was sung simply and without shame should not provide a source of dismay for anyone who studies history. Reagan merely managed his administration differently than others who have occupied that office. The book focuses solely on five men (North, McCain, Poindexter, Webb, and McFarlane), and delivers a moving, emotional, and poignant portrayal of young men and how the smell of gunpowder can stir the soul and change the course of individuals. In the case of John McCain, the prison in which he suffered turned out to be his salvation as a human being. In the case of Oliver North, the battle scars he carried only seemed to reflect his driving passion to succeed. This is a must read for all who value American History and understand why old men should only send young men into battle as a last resort. The fact that we are mired in another "unwinnable" war only makes this work more compelling. This story will be valid until such time as man conquers his conquering urge.

Published by Thriftbooks.com User , 19 years ago
When this book first came out my dad vigorously recommended it, but I ignored his entreaties. But in a twist of fate, we ran into the author at a book signing. The author, Robert Timberg, spent his career as a writer for the Baltimore Sun, but was also a graduate of the US Naval Academy - as were the subjects of this book. And while he never mentions it, Timberg appears to know well of what he writes - as it appears that he was injured/burned during his service in Vietnam. I think that gives him his unique perspective, which is that in some way the war damaged and affected all five of these men - and led them inexorably in their later lives.You do not need to know anything about the Navy, the war, the devisiveness of the 60's and 70's, the Reagan administration, Iran-Contra or anything else covered by the book to enjoy it (though if you do this can only add to your insight). Everyone I have given the book to has loved it - from a friend when he was deployed in Bosnia, a graduate of the Naval Academy, a roommate in law school with no military background, and even reluctantly my wife (who has not been able to put it down).Read the book - it is simply outstanding.

A stunning and mesmerizing account of modern day heroes

Published by Thriftbooks.com User , 23 years ago
As a Naval Academy Graduate and a huge admirer of Combat Vets and military heroes, I thought I would enjoy this book when several friends insisted I read it. But I was not prepared for the range of emotions I experienced, as well as the spellbinding way Timberg intertwined the lives of five honorable sailors/Marines. I absolutely loved it and couldn't put it down. It is a classic.

This book is an absolute masterpiece!

Published by Thriftbooks.com User , 23 years ago
After reading "Into Thin Air" a year ago, I thought that it would be a long time before I read anything quite so mesmerizing. Well, "The Nightingale's Song" rivals "Into Thin Air" in this regard. Written by a Naval Academy graduate, Robert Timberg, "The Nightingale's Song" is chock full of incredibly interesting insights about the lives and careers of five Naval Academy graduates who are somewhat familiar to anyone with an interest in national politics. Additionally, Timberg's nuanced analysis of the political innerworkings of the Reagan Administration which contributed to the Iran Contra debacle seems to be completely on the money. Relative to the five individuals profiled (Messrs McCain, North, Webb, Poindexter and McFarlane), Timburg paints five fascinating profiles which honestly deals with the strengths and weaknesses of each. One can read the book and still feel great respect for Oliver North, whose penchant for excess is thoroughly documented, due to his undying commitment to getting the mission accomplished (whatever it might have been). Case in point: Timberg's account of how North went back to Vietnam (after having ended his tour) on his own time and money to defend a former colleague on an unfair charge is one of the most inspiring of many inspiring stories in the book. My admiration for John McCain, which was high before I read the book, is through the roof after reading about the courage and tenacity with which he conducted himself while in the Hanoi Hilton. If anything, Timberg's own personal connection with the Academy gave him a great perspective with which to delve into the lives of each of these men and what forces might have shaped their individual characters. I can't recommend this book strongly enough. Timberg is now one of those writers that I would automatically buy (if he ever writes anything else). Given this tour de force, it would be a shame if he doesn't take another crack at a major work.

Published by Thriftbooks.com User , 23 years ago
I first read this book when it was originally published. Now, with the potential presidential campaign of John McCain unfolding, I revisited it, and in so doing, reaffirmed to myself what a tremendous story this is. Robert Timberg presents a fascinating study of five contemporary American men, their formulative years, their central experience...Vietnam, and then their post-war life and public service. During Iran-Contra, I was never a fan of either MacFarlane or Poindexter. North was something else, though, especially intriguing in his defiant testimony before Congress. But I came away from this book with a much different feeling towards these three men. My impression of Poindexter changed very favorably, not because of his actions but because of his sense of responsibility. I found myself to be very sympathetic towards MacFarlane ...a reasonably good man in a situation out of control. North, to me, became the villain...an extremely loose cannon with no controls from above.My admiration of McCain and Webb continues to grow. McCain's experiences, especially aboard USS Forrestal and then as a prisoner of war, are riveting. The parallel heroics of McCain's wife during the war is just as inspirational. But I found James Webb to be the most interesting character. Here is a very young man distinguishing himself as a outstanding combat leader, but powerless to prevent the slaughter of his men. Returning to law school, he faces an almost hostile enviornment, ridiculing his service and the sacrifice of his comrades. In the midst of this, Webb embarks on a process of establishing himself as a significant author, and also becomes a significant but controversial figure within the Navy. This is a book dealing with service, courage, honor and commitment, of paths which diverged and paths which converged. Above all, it is a book dealing with obediance to orders, and the consequences this obediance can produce. Read this book.
Trustpilot
Copyright © 2022 Thriftbooks.com Terms of Use | Privacy Policy | Do Not Sell My Personal Information | Cookie Preferences | Accessibility Statement
ThriftBooks® and the ThriftBooks® logo are registered trademarks of Thrift Books Global, LLC