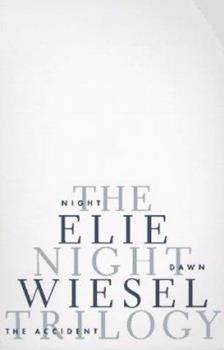 The Night Trilogy: Night, Dawn, and the Accident

(Part of the The Night Trilogy Series)

Night is one of the masterpieces of Holocaust literature. First published in 1960, it is the autobiographical account of an adolescent boy and his father in Auschwitz. Wiesel writes of their battle for survival, and of his battle with God for a way to understand the wanton cruelty he witnesses each day.In the short novel Dawn (1961), a young man who has survived the Second World War and settled in Palestine is apprenticed to a Jewish terrorist gang...

Published by Ash , 2 years ago
This book offers a really good look at The Human Condition. Day and Dawn raise very interesting questions on how a person deals with trauma and how to find oneself after a very traumatic life changing experience

If you have read Night by Eli Wiesel you must read his Trilogy- Night, Dawn, and Day

Published by Thriftbooks.com User , 12 years ago
I love Eli Wiesel's story. The first book of his I read was Night, I think it was actually a required reading back when I was in middle school. It was this book which sparked my interest in reading survival stories from the Holocaust and other like literature from that era. A few years back I came across Eli Wiesel's trilogy: Night, Dawn, and Day. I was not aware that he had published any other books of this type until then. I thought Night was such a moving story I bought the trilogy. The parts Dawn and Day are not as brutal and dark as Night but are equally as moving. They tell more about his life after Auschwitz and Buchenwald and how he coped and adjusted to society after the atrocities of the Holocaust. If you enjoyed Night I would definitely recommend reading his next two books.

Published by Thriftbooks.com User , 13 years ago
This was powerful and thought provoking. It wasn't an easy or comfortable read, but I still think of the concepts presented quite often.

Published by Thriftbooks.com User , 16 years ago
NIGHT was written back in 1962, and its story about a Jewish family deceptively taken from a Hungarian town into Auschwitz may seem a little "old" now that we have heard so much about this this through TV, movies, etc. But it's story is still a shocker,and always will be. DAWN is the most devastating and shocking, since it's history is not nearly as well known, and the question of who is willing to be an executioner is just as current today as during the 1948 Israel independence era. Also the facts of the period are not as known today as they should be. THE ACCIDENT may be a slight let down, but only in comparison to the prior tales. The interactions between the patient and his doctor are unforgettable, but the love story is not quite as interesting. The overall picture of gloom here may be lifted a bit when it seems that the narrator has possibly chosen to live for the living, instead of the dead, and to honor the dead. Though this interpretation is definitely subject to controversy.

The Fire! The Furnace! Look, over there!

Published by Thriftbooks.com User , 22 years ago
The cries of a madwoman on an Auschwitz-bound cattle car are just one of many portents shepherding doomed souls on their way to Nazi furnaces. In "Night", the first of three books in this collection, Elie Wiesel recounts his deportation to the death camps where the rest of his family perished. The tragic weight of his witness to this obscene cruelty burdens the reader with the fates of the inmates and his reflections on the meaning of evil. Wiesel questions his god and his faith. He sees sons kill fathers: "Meir. Meir, my boy! Don't you recognize me? I'm your father... you're hurting me... you're killing your father! I've got some bread... for you too... for you too..." (p.106), and becomes intimate with death. In "Dawn", Wiesel has migrated to Palestine and faces the duty to execute a captured prisoner. His long night of contemplation and uncertainty exposes his preoccupation with killing and killers and again with death: "Death," Kalman, the grizzled master, told me, "is a being without arms or legs or mouth or head; it is all eyes. If ever you meet a creature with eyes everywhere, you can be sure that it is death." (p.140). It is a preoccupation to be squeezed only from one who has not fully lost his faith or his humanity. A beggar explains the face of the night: "Listen," he said, digging his fingers into my arm. "I'm going to teach you the art of distinguishing between day and night. Always look at a window, and failing that look into the eyes of a man. If you see a face, any face, then you can be sure that night has succeeded day. For, believe me, night has a face." (p.126) Fear, night, suffering, and evil are his companions, and he explores them constantly. "Being afraid is nothing. Fear is only a color, a backdrop, a landscape." (p.174). Until, in "Day", he survives a terrible accident and is faced with his own complacent acceptance of mortality. He struggles with the urge to explain to his talented young doctor the futility of fighting against death, and reaches an epiphany when he understands the tragedy of splashing others with his suffering. "Suffering brings out the lowest, the most cowardly in man. There is a phase of suffering you reach beyond which you become a brute: beyond it you sell your soul - and worse, the souls of your friends - for a piece of bread, for some warmth, for a moment of oblivion, of sleep." (p.247).These stories are powerful and frightening,. Death is an implacable enemy, but also a partner for life who never goes away and will always win in the end. Wiesel has stared at evil, his stories are wrenching.
Trustpilot
Copyright © 2022 Thriftbooks.com Terms of Use | Privacy Policy | Do Not Sell or Share My Personal Information | Accessibility Statement
ThriftBooks® and the ThriftBooks® logo are registered trademarks of Thrift Books Global, LLC