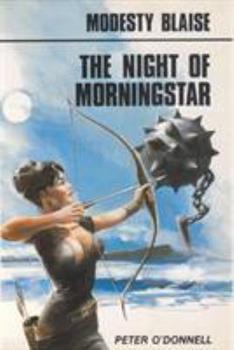 The Night of Morningstar

(Book #11 in the Modesty Blaise Series)

* THE ELEVENTH NOVEL IN THE BESTSELLING MODESTY BLAISE SERIES * 'The finest escapist thrillers ever written' THE TIMES 'Before Buffy, before Charlie's Angels, before Purdy and Emma Peel, there was Modesty Blaise' OBSERVERModesty Blaise is about to retire from her criminal empire, the Network, a crime syndicate specialising in art theft and industrial espionage. But there is one final, astounding mission before she can leave and the Network is disbanded...

Published by Thriftbooks.com User , 12 years ago
Probably the weakest of the Modesty Blaise books, it begins with a flashback to the time of The Network. Willie has just finished testing a possible new recruit with physical skills approaching his own. However, his state of mind is not up to the job - too arrogant, etc., according to the leadership group, so they give him the arse. This rejection leads into the plot in the present, when a group including 'The Graduate' as he was nicknamed is involved in some political plotting and destruction - and after a couple of assassination attempts, Modesty, Willie, Steve and Dinah get involved. Tarrant himself is a target, and not to pleased with those plotting destruction in his country. 3.5 out of 5

Published by Thriftbooks.com User , 15 years ago
Suspend disbelief and enjoy another fun outing from O'Donnell. This time out, we actually begin before the first book was written, with a flashback to Modesty in her "Network" days, then shift forward to the "present." There's plenty of devious plotting here as Modesty runs up against the fiendish "Watchmen," mysterious and terroristic (and nasty) would-be world dominationists. We've seen their kind before, and so has Modesty. "Watchmen" beware! This is tongue-in-cheek fun for action fans, and one of my favorites in the series.

Published by Thriftbooks.com User , 20 years ago
Modesty and Willie are back, with the simple task of saving the Western World from chaos and destruction. A man from Modesty's past comes back to haunt the dynamic duo, but with the help of the intrepid Steve Collier and brave but blind Dinah Modesty and Willie come out on top. Of course, it's not easy, things go wrong and until the last page is turned there's every chance that it'll all go pear-shaped, but the attraction of O'Donnell's writing is that you can KNOW that the good guys will win, but he keeps you guessing as to how and when. Not an easy book to come by, like most Modesty titles now, but well worth the trouble to find.
Copyright © 2020 Thriftbooks.com Terms of Use | Privacy Policy | Do Not Sell My Personal Information | Accessibility Statement
ThriftBooks® and the ThriftBooks® logo are registered trademarks of Thrift Books Global, LLC