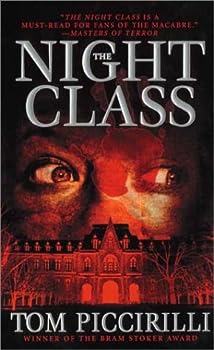 This description may be from another edition of this product. Facing another semester of classes, Cal Prentiss moves into a new dorm unaware that a murder occurred there over the winter break. He discovers evidence of the unspeakable crime and becomes obsessed...

Published by Thriftbooks.com User , 18 years ago
I can see why this book won a Bram Stoker Award for Best Horror Novel of the year. Few authors are as capable as Tom Piccirilli of building up an unsettling and disturbing atmosphere of dread. Small details twist and coil and continue to add to all the other many touches of evil. The winter campus setting is also the perfect vehicle to tell this offbeat tale of a young man haunted by supernatural forces even as he tries to battle what appears to be a conspiracy of murder in the hallowed halls of his university. When Cal Prentiss returns from the winter break to find that a girl has been killed in his dorm room, he grows obsessed with bringing the culprit to justice. Is her ghost, and the spirit of his dead sister, actually haunting Cal or is he having a nervous breakdown as he suffers stigmata? Piccirilli takes us on a crazed investigation into the heart of malevolence and fear. Five stars, check it out.

Published by Thriftbooks.com User , 18 years ago
Tom Piccirilli is one of the most consistently innovative horror writers currently working in the industry. All of his novels manage to raise the bar another notch and each one is completely unique and wholly different from the next. The Night Class has touches of the supernatural that are perfectly intertwined with a story that is, at its core, a mystery that leads the hero through his own dark night of the soul. The fact that the entire book takes place in a single night proves how well Piccirilli manages to frame his story within the context of his own subtle symbolism. This is a thriller that takes place on a university campus where a murder has occurred, but really it's the tale of one man's journey through a night of madness where everything he's come to believe is shaken and corrupted. A brilliant literary event.

Published by Thriftbooks.com User , 18 years ago
Cal Prentiss hasn't had an easy life; his sister killed herself in front of him when he was five, and his palms gush blood whenever someone close to him dies. Now he returns to university for his final semester to find that a girl has been killed in his dorm room over winter break. Not only has the incident been kept out of the media, but no one at the school seems to know anything about it. Or at least, they're not talking. Cal takes on the mystery of the murdered girl as his pet project, but completing it may cost him more than he bargained for. He's bleeding again.This is an excellent, atmospheric mystery with full characters and a genuine feel for setting. There's something inherently creepy about a college campus in winter, and the author takes full advantage of that. With this second novel (mine, not the author's -- I'd previously read THE DECEASED), Tom Piccirilli has risen to the top of my list of horror authors to watch out for.

Published by Thriftbooks.com User , 19 years ago
A deeply affecting novel that takes the college life and spins it on its ear. Here is the story of a man who returns to campus after the winter break to find that a murder has been committed in his dorm room. He grows more and more obsessed with not only finding the killer, but discovering the true identity of the victim.Slowly our protagonist, Caleb Prentiss, comes to fear that he's haunted not only by the dead girl, but also by his own sister--a former nun who committed suicide in his arms. Ever since that time, Cal has suffered from stigmata whenever someone close to him dies.Despite the backstory, the book itself takes place in a 24 hour period. Cal learns more in this day than in his four years of higher education. He discovers secrets about his university, his teachers, his best friends, and even himself.A gripping, thrilling, suspenseful read, I urge you all to sign up for this night class immediately!

A macabre mixture of horror and mystery

Published by Thriftbooks.com User , 20 years ago
Few writers are as talented as Tom Piccirilli when creating an all-consuming atmosphere of dread. Even the most innocent details can have touches of evil. Here he turns campus life on its head and topples it over, giving us one night in the life of a student who finds that nothing in his academic world has been what it seems. Cal Prentiss returns from the winter break to find that a girl has been murdered in his dorm room. Half-heartedly, he decides to write about his fantasies of her as his senior thesis. Is her ghost, and the spirit of his dead sister, actually haunting Cal or is he simply coming apart as he prepares to enter "the real world"? Another bit of weirdness is tossed in: Cal suffers from stigmata whenever someone on campus dies.And from that single plot element Piccirilli takes us on a frenzied investigation into the heart of university malevolence and student activities of the most bizarre kind. This edition is also signed by the author and artist, which makes it that much more worthwhile.
Copyright © 2020 Thriftbooks.com Terms of Use | Privacy Policy | Do Not Sell My Personal Information | Accessibility Statement
ThriftBooks® and the ThriftBooks® logo are registered trademarks of Thrift Books Global, LLC