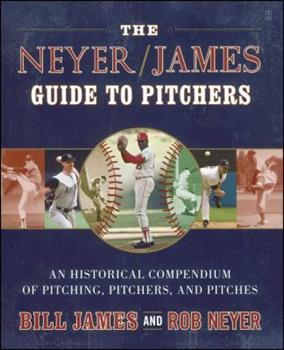 The Neyer/James Guide to Pitchers: An Historical Compendium of Pitching, Pitchers, and Pitches

by Rob Neyer and Bill James

Pitchers, the pitches they throw, and how they throw them -- these days it's the stuff of constant scrutiny, but there's never been anything like a comprehensive source for such information. That's what preeminent baseball analyst Bill James and ESPN.com baseball columnist Rob Neyer realized over lunch more than a dozen years ago. Since then, they've been compiling the centerpiece of this book, the Pitcher Census, which lists specific information...

Can a reference book really be this entertaining?

Published by Thriftbooks.com User , 18 years ago
I make no bones about being a loyal Bill James-ite, so when I found out he and his old running buddy Rob Neyer (now of ESPN) were working on a book about pitchers and pitches, I knew it would go immediately to the top of my "must buy" list. Now, a word of warning: "The Neyer/James Guide to Pitchers" IS A REFERENCE BOOK! If you're looking for a book with nothing but the interesting, thought-provoking, often caustic, always entertaining essays that are R.N.'s and B.J.'s bread and butter, there are a few (and they're very good). But at its heart, the book is a reference volume, listing the pitches and pitching styles of pretty much every significant pitcher in Major League and Negro League history (and many of the less significant ones too). But be that as it may, the reference material is probably more entertaining than most prose by other writers. It's the sort of book that, if you like baseball history, you can open at random and find something you a) didn't know, and b) will find funny, intriguing or just plain enlightening. One example: if you've ever read "Ball Four", you know that one of the running jokes is about Seattle pitcher Steve Barber and his arm ("it's not sore, it's just a little stiff" -- notwithstanding that he probably spent more time with the diathermy machine than he did with his teammates). Wonder why he was so racked up? Turn to page 126 in Neyer/James -- Barber was a fastball/slider pitcher who threw ACROSS his body, absolutely the worst combination of pitch selection and pitching motion if you want to keep your arm healthy. I could cite 20 more examples easily. So thank you, Rob and Bill, for filling a gap in the baseball research library, and making it fun to boot. I know when I'm drafting pitchers in my all-time fantasy league at Legends of Baseball, I'll be glad to have this book by my side.

An underrated and terrific book

Published by Thriftbooks.com User , 18 years ago
I judge a book not by what it doesn't have, but what it DOES have. And this book has all the things you'd expect in another great book from Bill James or Rob Neyer. It has information you can't find anywhere else and probably never thought you could. Where else could you find accounts of exactly HOW all these pitchers pitched, all in one volume? It's the result of a decade of research by the two authors and their assistants. In additional to the basic information, there are the usual essays, plus the usual Bill James digressions and asides. It's all very well organized. There's no trouble knowing where to find what you want. And, as usual, it makes you THINK, and it makes you realize things that are relevant not just to baseball but to everything. One of the opening chapters focuses on how much the subject depends on linguistics and vocabulary, and how we might think a source tells us something but it doesn't really, because we don't understand the meanings of the words and phrases that are being used. Usually this is because the language has evolved over time, but sometimes it's because the language is used arbitrarily or sloppily. This is true about "knuckleballs" and "sliders" and "curves." But we readily realize that it can apply to anything. The introductory chapter includes some duelling between the authors about things, some of which would seem to be "facts" but which are hard to pin down. It's interesting to see how much remains debatable about such a seemingly straightforward subject, even after years of research, and how much it will forever be arguable. Especially interesting is the material about how the mechanics and strategy of pitching have evolved over the years, and WHY. In most instances there were specific reasons and fairly clear dividing lines for the major changes. My one criticism would be that the content is indeed a bit erratic. One of the book's purposes is to catalog any noteworthy idiosyncrasies of a pitcher's style. But I notice that on some of the guys with the very most famous idiosyncrasies, you find nothing or almost nothing. For example, there's nothing about what Al Hrabosky was famous for, and almost nothing about Luis Tiant's hilarious mannerisms. Still.....highly recommended for Bill James/Rob Neyer fans, and for anybody who enjoys interesting baseball material that's unlike what you've ever seen.

Worth it for baseball fans, but not a complete reference

Published by Thriftbooks.com User , 18 years ago
If you're a big baseball fan like I am, then this book is worth it. If you're a fan of Rob Neyer's ESPN.com columns or books, then you probably already own it. If you're a fan of Bill James, then you probably will never read this because you've read it twice already. Suffice to say, it's really a niche work, but one that's very interesting to longtime baseball fans. The book is split into sections detailing the history of different pitches, some of its innovators and analysis. The bulk of the pages are dedicated to capsules about almost every pitcher to have had a significant career. What pitches did they throw? How effective were they? Surprisingly, there was never a reference work that compiled all this information. You would read here and there about Pedro Martinez's changeup, Koufax's curveball, or Nolan Ryan's fastball, but what about other less famous pitchers? They're all here. The one thing this book lacks is the context to go with these capsules. In the interest of saving space, the book doesn't tell you which teams they played for, their best seasons, or most other stats that you would expect. The assumption here is that, as a baseball fan, you already own or have access to books that tell you that. It's intended as a book to compliment other baseball reference books. All in all, a fine baseball book, one that I've found myself referring to numerous times since I bought it. Highly recommended for baseball fans.

Entertaining -- And that's the point.

Published by Thriftbooks.com User , 18 years ago
I disagree with a great deal of the material in this book. Not surprisingly, I found the 'refutation' of Pitcher Abuse Points weak and flawed.But that doesn't really matter. This is a fun book to read. It's a great way to spend some time.Maybe some minor changes that could have been made in terms of format, editorial decisions, and whatever, but that's true for every book. I think it's fascinating and entertaining to learn what's behind some of the numbers for guys I never got the chance to see. I can disclaim and state that Rob is a friend and colleague, but it doesn't change the fact that this is a very entertaining book, and has a bunch of angles that will appeal to a bunch of different people. It's clear that Rob was passionate about this book, and I'm grateful for that. This is a winner, it's not expensive, and when you read it, your mind fills with images of baseball. That's high praise, and it's well earned here.

Published by Thriftbooks.com User , 18 years ago
First of all, the price is definitely right. There is a lot of valuable information in this book and it's fairly inexpensive. The first section of the book consists of some interesting biographies of some very good pre-war pitchers that baseball fans should probably know more about, as well as some lists of who threw the best types of each pitch and definitions of different pitches. Best pitch I've ever seen? Has to be Mariano Rivera's cutter.The second section is a census of pitchers with 1000 IP or 400 games, showing what pitches they threw. This section can get a bit dry at times. It is interesting to see, in certain cases, how pitchers threw differently pitches at different times in their careers.The final section is a collection miscellaneous Jamesian-style essays that we know and love. There are some trivialities, such as the essay on "unique records" (i.e. only one pitcher has ever gone 24-5) but I enjoyed this section. James also tries to shoot down pitcher abuse statistics, but I didn't find this very compelling since the data set seemed too small and had the potential of serious biases (as mentioned in the follow-up article).My one major criticism about this book is that a lot of the information in the pitcher's census part (which comprises at least 2/3 of the book) is more useful from a historical records point of view rather than an interesting read. It's an incredible research job, no question, but reading that some pitcher in the 1920s threw "1. Fastball 2. Nickel Curve" does not do it for me. I would definitely recommend this book overall though. I'm sure I'll be dipping in and out of it for most of the summer. It's something you can come back to again and again, not something that you are necessarily going to read cover to cover. The essays are very good as always and the book has a "replacement-level" price and "all-star" (though not "hall-of-fame", to be sure) content :)
Trustpilot
Copyright © 2022 Thriftbooks.com Terms of Use | Privacy Policy | Do Not Sell My Personal Information | Cookie Preferences | Accessibility Statement
ThriftBooks® and the ThriftBooks® logo are registered trademarks of Thrift Books Global, LLC