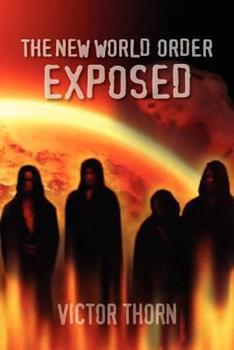 This description may be from another edition of this product. "The New World Order Exposed" shows in brilliant detail how a cabal of international bankers is deliberately trying to undermine America. This book is quite possibly the most comprehensive of its kind...

Published by Thriftbooks.com User , 13 years ago
Victor Thorn has thouroughly documented and has analyzed subjects that most media analysts and correspondents do not want to touch other than to parrot the official explanations. This is certainly a book with a plethora of facts and quotes that make the reader want to reexamine historical events and want to understand the significance as to why these events may provide support for the possible hidden agendas of the established power brokers and agents of influence in our society. According to Thorn, these powerful interests have control far beyond the boundaries of this nation and have a global agenda to invalidate the concept of national sovereignty and to create a "new world order" where borders and cultures are meaningless. The plan by these eltists is to have a "one world government," where most of the world's peoples will be ruled by this cabal of elitist plutocrats who will continue to fill their coffres through the exploitation and the manipulation of the masses. Who are these elitists? Thorn clearly explains and references these powerful individuals to be the wealthy international bankers and their cohorts in the military-industrial-oil complex. It will come as no surprise to any reader of this text that today's news headlines seem to be dominated by issues relating to concerns in the credit sector, the defense sector, and the energy sector! THE NEW WORLD ORDER EXPOSED is a truly outstanding examination of the direction of our society and clearly outlines what dangers the multitude of citizens face in a country that has been usurped by global elitists who have no love for the U.S. Constitution or for our concept of individual rights and sovereignty. The agenda of these shadowy figures is quite diabolical according to Thorn, and this book is intended as a wake-up call to the American people to reassert their rights and responsibilities as a free people and to reclaim this nation in the tradition of the Founding Fathers such as George Washington and Thomas Jefferson. While Thorn does not openly call for a revolution and certainly does not advocate an overthrow of the government, he does suggest throughout the book that inaction and complacency only serve the interests of the elitists and that these powerful forces have assumed control largely as a result of indifference and slack among the masses. Once I started reading this book, I found it difficult to put down. Each chapter opened my eyes to more captivating and revealing information. The research that Thorn presents in this book is quite startling. He pays careful attention to historical events that had far reaching consequences such as the Pearl Harbor attack, the Kennedy Assassination, 9-11, etc. and shows how these events may have been created by forces not covered in the popular media because of the possibility of media domination by these same forces with sinister agendas. The end result has been devastating to not only the American people but also to other peoples of

Another point of view

Published by Thriftbooks.com User , 14 years ago
I think the best thing this book has to offer is a different point of view! I do agree on certain things that the author is bringing forth and I do agree as well that there are many things going wrong in todays world, however there are other points I do think he is a bit too radical, or it seems he is giving way to his frustration! Overall the reading is rather easy, it's meant for a broad audience and, as mentioned before, it is giving the reader the opportunity to see things from a different point of view! Quite interesting!

Published by Thriftbooks.com User , 17 years ago
When it comes to facts, this is one of the best books in the genre that I have ever read. Every subject that concerns history and the way things are working is covered here. It is also backed up by references for those who wish to investigate the truth further. As another reader pointed out, Thorn's writing style sets him back a few points but I still rate this book 5 stars. Not only should you read this book, you should act upon it before it is too late. Even though Thorn focuses on Americans, this book is invaluable for any citizen of the world. The truth has no colours.

Published by Thriftbooks.com User , 18 years ago
Victor has done a remarkable job. It may astonish lots of people in the USA but reality sometimes hits home hard. As Jim Marrs puts it: Fellow American's, you better read this book now and act before it becomes too late for the average US citizen. There is alot of new stuff and there is material which is covered in other wonderful books. Also Thorn does not convince as an editor, he sure gets people's attention with his writing. I hope he leves his cats out of any future books. His english style if changed might get him more conservative customers. Please just read it, a must!!
Copyright © 2020 Thriftbooks.com Terms of Use | Privacy Policy | Do Not Sell My Personal Information | Accessibility Statement
ThriftBooks® and the ThriftBooks® logo are registered trademarks of Thrift Books Global, LLC