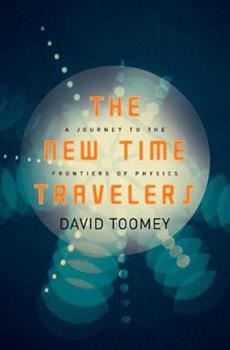 The New Time Travelers: A Journey to the Frontiers of Physics

Since H. G. Wells' 1895 classic The Time Machine, readers of science fiction have puzzled over the paradoxes of time travel. What would happen if a time traveler tried to change history? Would some force or law of nature prevent him? Or would his action produce a new history, branching away from the original?In the last decade of the twentieth century a group of theoretical physicists at the California Institute of Technology undertook a serious investigation...

Published by Thriftbooks.com User , 14 years ago
A gripping read about what is often a daunting topic, Time Travelers takes us on an intellectual and imaginative journey through science, science fiction, and the lives of scientists. Books on these topics can often be obscure or overly fanciful. This one is delightfully alive, and Toomey is never less than careful in both the physics and speculations about time travel. A lesser writer would have fudged the facts to make room for fantasy, but Toomey builds a smart and powerful (though qualified) case for a kind of time travel that retains enough fantasy to keep the pages turning but never scrimps on the facts. Another fine effort by an excellent writer.

Published by Thriftbooks.com User , 15 years ago
When I was a kid I was completely mesmerized by the Time Tunnel -- a 1960s sci-fi series about two research scientists who become trapped in a top secret portal through time. David Toomey doesn't have my beloved Dr. Tony Newman (played memorably by James Darren, in form-fitting corduroy) but his book is populated by scientists who, if not quite as sexy, are just as captivating. I found myself fascinated by the book's take on the scientific community and how it works -- how concepts evolve over time, and also, maybe even especially, how ideas can migrate back and forth between scientists and the world of science fiction. Toomey does a great job of making the science itself accessible, but for me the really careful description of how scientific insight builds over time, how epiphanies large and small, new and sometimes pretty old, accumulate and eventually become theories, was worth the price of admission alone. The politics of science research and publication is also really present in the book -- I got a good sense of how on-the-ground professional factors shape the high-flying theory in play. It was a great read.

Cover-to-cover in three days! Great science fiction without the fiction.

Published by Thriftbooks.com User , 15 years ago
I love to read science fiction, especially the classic short stories. I must admit I approached this book with some trepidation..... my "summer reading" rarely includes non-fiction, especially science. Having said that, I am very glad this book was recommended to me. I bought it on a whim and--even though it looked daunting (lined up next to the paperback novels)--I read it cover-to-cover in three days. That's saying a LOT, as I have the attention span of a ... Okay, about the book: I learned some things I didn't know before about relativity, I laughed at some stories of theoretical physicists at work, and got a welcome dose of time travel paradoxes. My favorite is the classic "grandfather paradox"--that is, can a time traveler kill her grandfather and so change the past? I've read about it in science fiction, but Toomey (and the physicists he talked to) offer much more complex and provocative discussions in The New Time Travelers. I find it amazing to discover what these physicists and philosophers are theorizing and debating about. For instance, the book talks about Igor Novikov, a physicist who suggests that if a natural time machine exists somewhere in the universe and we can reach it via unmanned spacecraft, we could exploit something called the "Bootstrap Paradox" (gotta love that name for a time travel paradox, eh?) and force the spacecraft to create itself. It would carry knowledge of its own design and the location of the natural time machine from the future to us in the present. Are they dreaming up the next science fiction bestseller? Nope. It's serious science. This is why I like the book so much. It sounds a LOT like science fiction, but these ideas been debated among theoretical physicists. All very serious, all very plausible....well, debatable, at least, which is a start. I would have been just as skeptical of virtual reality or gene manipulation only 20 years ago, so you never know. I totally recommend this book. I honestly can't believe I enjoyed it so much, given the books normally on my summer reading list....

As fascinating as it is startling

Published by Thriftbooks.com User , 15 years ago
This book completely caught me off guard. Not only did I not know the extent to which time travel has been seriously considered by contemporary physicists and mathematicians, but I was taken aback by various counterintuitive and provocative themes that pop up here and there. For example, it's obviously clear that hard science has influenced science fiction writing, but Toomey brings up specific examples in which physicists actually credit the influence of an idea in story or novel in their conceptualization of spacetime. That being said, Toomey doesn't beat connections like those to death. The book moves at a brisk pace. It delves into fairly heady theories and hypotheses--e.g., wormholes, supraluminary signals, cosmic strings--but it manages to provide just the right amount of explanatory detail to keep the narrative engaging. (Who would have thought that theoretical physics would make good summer reading?) He does provide very thorough citations too (roughly 80 pages are devoted to endnotes, a glossary, and index.) The style, subject matter, intelligence, and comic timing compare very favorably to Bill Bryson's A Short History of Nearly Everything. Of course, Toomey's task at hand is certainly more focused. In addition, Toomey is not satisfied with simply meditating on questions or sowing a sense of the awe and vastness of the universe. It's clear he wants answers. He wants his time machine. I do too.

Published by Thriftbooks.com User , 15 years ago
There have been a number of good books on the viability of time travel, most by the physicists who have done work in the field. A chapter in Kip Thorne's excellent Black Holes and Time Warps describes Thorne's own venture into this strange realm; J. Richard Gott's equally good Time Travel in Einstein's Universe goes a bit further, focusing (naturally) on Gott's own work. Toomey is not a physicist, but that may more an advantage than a liability, as he brings a broader and more comprehensive history of the inquiry. Also, since Thorne's work appeared in 1994 and Gott's in 2001, he takes us up to date. Toomey tells the story chronologically, in the classic "scientific detective story" fashion, and he keeps it moving, sprinkling it with examples from science fiction, a few Escher lithographs, and plenty of diagrams. Readers seeking a real understanding of "closed timelike curves" will not feel cheated: there is an extensive glossary, and enough footnotes and citations to technical papers to satisfy a serious scholar. This might be the closest thing to a definitive history of the serious study of time travel that we have so far, and it is as fascinating a story as one could wish.
Trustpilot
Copyright © 2022 Thriftbooks.com Terms of Use | Privacy Policy | Do Not Sell or Share My Personal Information | Accessibility Statement
ThriftBooks® and the ThriftBooks® logo are registered trademarks of Thrift Books Global, LLC