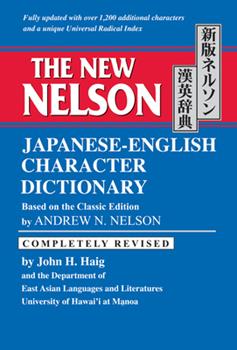 The best of them all is now even better...

Published by Thriftbooks.com User , 15 years ago
Andrew Nelson's "Japanese-English Character Dictionary" was the best of the post-WWII kanji dictionaries, and in its revised form it's the best of the dictionaries published since the Bubble economy first inspired Americans to turn Japanese in the 1980s. The Nelson dictionary remains easily the most comprehensible kanji dictionary available; if the compound or character you're searching for isn't in here, odds are most native Japanese would be stumped by it too. On a technical level, the new Nelson retains the traditional, idiosyncratic 214-radical system, and organizes its characters according to radical. Each page carries a radical number, kanji numbers, and a page number; within each radical kanji are subdivided by ascending stroke number, with the same going for compounds within character entries. All in all the organizational system is easy to use, especially coupled with the side-of-the-page radical index. The real star of the show is the Universal Radical Index, the Nelson's answer to SKIP codes. (I should confess that I find SKIP codes an imprecise and silly pain.) What the URI does is allow dictionary readers to look up any kanji by any of its components, which is especially useful when confronted with a character whose radical is atrophied or difficult to distinguish (and who among non-Japanese kanji readers doesn't have difficulty with radical analysis?). But with the URI, if you know any one component of a particular kanji and its total stroke number, or even have a good guess, you're virtually guaranteed to find what you're looking for eventually. The new Nelson also includes many helpful and interesting appendices on kanji, the kana scripts, kanji history in Japan and standard kanji lists. I especially appreciate its willingess to list archaic or non-standard ways of writing more common characters. My only complaint, after having used Kodansha's "Essential Kanji Dictionary" (which I would reccommend to a more casual user of Japanese without reservation), is that the character reading index is alphabetized according to Roman alphabetical order rather than according to the order of the Japanese kana scripts. It seems a strange oversight in what is otherwise so accomplished a volume, and overall it's not very detrimental. Maybe next edition.

The Universal Radical Index is wonderful for beginners

Published by Thriftbooks.com User , 18 years ago
I understand the frustration of the long-time Japanese linguist who wrote the review below and misses the Nelson dictionary that he became used to, but as a beginning Japanese learner, the new Universal Radical Index (URI) is extremely helpful. I am gradually using it less and less as I become more familiar with picking out main radicals, but in the meantime, if I'm stumped, I can always find kanji with the URI. The URI does add 230 extra pages, but even without that, this isn't exactly a book you can stick in your back pocket. Also, for beginners, remember to supplement your kanji-learning with books that focus on contemporary Japanese. Many times, I've memorized a new and interesting word I spotted in the Nelson, only to find out later that it hadn't been used for over a hundred years. (Although I admit that this is useful for providing amusement to my Japanese friends - the equivalent of a non-native English speaker confidently telling his friends that he "went thither".)

Published by Thriftbooks.com User , 20 years ago
This dictionary is not for beginners since it does not include the stroke order, however it has some very interesting points: 1.- Covers every possible kanji used in modern Japanese, +7000 2.- It includes some variants or ancient forms that still appear on some papers or publications 3.- It has a "God bless the editor" Universal Radical Index URI where you cand find a Kanji by whatever radical it includes not only by the official one. It really speeds up to WARP the localization of a kanji it does not matter how complex. 4.- It has plenty of compounds JUKUGO and it is not difficult to get to a second position compound using the URI index.I would recommend it for a student on 2nd year or above.

The best kanji dictionary I have found

Published by Thriftbooks.com User , 22 years ago
I would suggest to anyone thinking about buying a kanji dictionary to look through the major ones, perhaps in a university library, to get a feel for them, because personal preference plays a huge role in selecting one that suits you. That aside, I have to say I can look up compounds faster with the Nelson than with any other kanji dictionary, and it has a huge amount of information. One minor quibble is that the binding of my book did not survive my all-too-frequent use of it!

The New Nelson is a good buy for students of Japanese.

Published by Thriftbooks.com User , 24 years ago
The New Nelson Japanese-English Character Dictionary is a complete revision of the previous Modern Reader's dictionary compiled by Andrew Nelson. The original dictionary (now referred to as "Classic") has long been the stand-by for many students of the Japanese language. It's main strength was the large amount of character-compounds it listed. It's primary weakness was that it was slowly but surely getting outdated. So users of all character dictionaries, and Classic Nelson owners especially, have been waiting for this new revision. The question is: does it disappoint? It is important to consider at to whom this book is targeted. The foreword to both editions make claims to being a "writer's" dictionary as well as a "reader's" dictionary, but considering the title of the "Classic" edition, and the make-up of the current edition, it is clear that it is meant for those who read Japanese; Japanese language students, and those living in Japan. Frankly, the Nelson dictionary has never been a "learner's" dictionary, and this edition is no different. History, use, frequency; the Nelson dictionary makes no attempt to clarify any of this. It is a static reference tool, and it does not try to be anything else. You will not find compounds listed by the second, or third, character. There is nothing demonstrating stroke order. There are no examples of usage. It is difficult to actually glean anything from the dictionary, beyond a somewhat barren definition to a character and/or its various compounds. It is important not to try and make the Nelson dictionary something it is not. The Nelson dictionary has but one purpose; to provide a meaning to whatever character/word/compound a reader of Japanese might come across while in the course of reading some kind of literature. The "writer's" aspect of the dictionary is auxillary at best: since stroke order is not shown, basic character knowledge is required. One can use the Nelson as an aid to writing simply because of what it is, not because of any special design. What the Nelson intends to do, it does very well. It is not at all easy to "stump" the dictionary; more often than not the compound one is looking up is available. As a listing of definitions, the New Nelson is as good as any other dictionary. It lists verb and adjective forms of words under their character, as well as nouns and conjunctions. And the compound listings can't be beat. This is the reason the Nelson dictionary has been the "standard" for years, anyway. The "New" Nelson would've continued to be a standard simply by updating the definitions, and cleaning out the obsolete characters. But in this day and age, character dictionaries are ultimately judged by their character-look up systems. Every dictionary has its own system. Usually, the users of the dictionaries tend to use whichever system they are most familiar with. This makes the question of what is "better" largely moot. However, th
Copyright © 2022 Thriftbooks.com Terms of Use | Privacy Policy | Do Not Sell My Personal Information | Accessibility Statement
ThriftBooks® and the ThriftBooks® logo are registered trademarks of Thrift Books Global, LLC