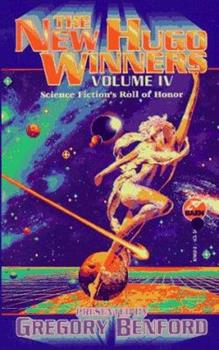 This description may be from another edition of this product. Since 1953, the annual Hugo Awards presented at the World Science Fiction Convention have been as coveted by SF writers as is the Oscar in the motion picture field--and SF fans recognize it as a...

Published by Thriftbooks.com User , 15 years ago
The works presented in this volume are the Hugo Award short-fiction winners in the categories of Short Story, Novelette, and Novella for the years of 1992, 1993, and 1994. The short-fiction works of Short Story/Novelette/Novella as a rough rule of thumb follow 15/30/60 page-lengths, although there have been Short Stories as short as 3 pages, and Novellas as long as 120 pages as some presented here. Hugo Award Winners tend to be more traditional science-fiction/speculative-fiction stories than Nebula Award winners. Meaning that some stories may be a bit old fashioned such as A Walk in the Sun, but then usually tends to avoid awards on lesbianism, magic auras, faery handbags, and other topics that are not science fiction such as what the Nebulas award to. The stories are: 1992 Short Story: A Walk in the Sun, Geoffrey Landis: a lunar orbiter crash lands on the moon and a survivor struggles to continue to survive. 1992 Novelette: Gold, Isaac Asimov: A writer is persuaded to attempt to convert a story to a screen play. 1992 Novella: Beggars in Spain, Nancy Kress: Best story of the collection. This was eventually expanded into a novel and then a trilogy. A subculture of people arise that no longer depend upon sleep. For younger readers, society's reaction is similar as to the protagonists in the X-Men movies. 1993 Short Story: Even The Queen, Connie Willis: About the horrors of menstruation. After reading this I was asking women, is menstruation the absolutely horrible, soul wrenching experience as this story makes it out to be. Willis tries to make the story tongue-in-cheek. Yeah, right. Willis can write anything she wants, but to give a Hugo to this... This is just the type of story the Nebulas would also give an award to, and naturally they did. 1993 Novelette: The Nutcracker Coup, Janet Kagan: Dealing with the culture of an alien society. 1993 Novella: Barnacle Bill The Spacer, Lucius Shepard: Not a story about a Lensman-like hero, but rather about a shambling character intimidated by everyone. 1994 Short Story: Death on the Nile, Connie Willis: A sort of horror story. 1994 Novelette: Georgia on My Mind, Charles Sheffield: Good adventure story, but ends unfulfilled. 1994 Novella: Down in the Bottomlands, Harry Turtledove: Alternative history story where African nations are nuclear superpowers and a murder mystery ensues in a national park.

Published by Thriftbooks.com User , 21 years ago
Unless you read the science fiction magazines, you've probably missed these sf stories. This is a great compilation of excellent SF; don't miss it!

Published by Thriftbooks.com User , 22 years ago
I've noticed that even impressive collections like this have no reviewers. I want to think it is because the fact they won Hugos means no further recommendation is required, but that excuse doesn't really wash. Fortunately collectins of big name authors do slightly better, but anthologies like this that contain stories by big name authors aren't being read anymore it seems. Worse Hugo winning stories tend to come from magazines like asimov's, analog, f & sf, & SF Age which all are in decline. On the plus side the Hugo anthologies are generally good reading & I almost wish they did what the Nebulas do i.e. put out yearly collections of their nominees. Since I tend to prefer Hugo nominated stories to Nebula nominated stories I'd jump at it. Oh, well. Interstingly many of the great stories in this collection were first in magazines. Beggars in Spain is especially wonderful, but I bet the others are too. A good thing about anthologies like this is that we live in an age of bloated trilogies so this is a nice step in a different direction. I hope you enjoy this collection and I hope short fiction is in better shape than I think. P.S. If you like short fiction of any stripe give science fiction anthologies a chance, after all s.f. is perhaps the best place for short fiction nowadays.
Copyright © 2020 Thriftbooks.com Terms of Use | Privacy Policy | Do Not Sell My Personal Information | Accessibility Statement
ThriftBooks® and the ThriftBooks® logo are registered trademarks of Thrift Books Global, LLC