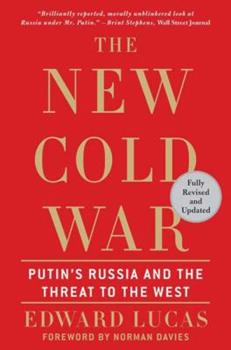 The New Cold War: Putin's Russia and the Threat to the West

LBJ aims to prove that Vice President Johnson played an active role in the assassination of President Kennedy and that he began planning his takeover of the U.S. presidency even before being named the vice presidential nominee in 1960. Lyndon B. Johnson's flawed personality and character traits, formed as a child, grew unchecked for the rest of his life as he suffered severe bouts of manic-depressive illness. He successfully hid this disorder from...

Published by Thriftbooks.com User , 12 years ago
Has Russia really changed from the Soviet Union in the Old Cold War? Looking at the situation economically, politically, Militarily not much has changed. Many of the Soviet Union's old habits continue to be used in contemporary Russia. Many of these habits have greater implications today than during the Old Cold War. Adapting to this reality will be increasingly difficult within the new global situation. The author begins to discuss the current situation and how the West can adept to the situation. The situation might even be more dangerous today in the new world and everyone needs to adapt the new reality.

Is Russia assembling a new Axis of Evil?

Published by Thriftbooks.com User , 14 years ago
Russia is heading in an ominous direction that poses a threat to its own citizens, neighboring states and the world as a whole. This book with its disturbing message takes a hard look at the Russian ruling elite which emerged almost entirely from the ranks of the old KGB. Harboring resentment and malice against the West, this elite's attitude is crude and unsophisticated compared to the hostility of the Brussels Eurocracy towards the USA and Israel. The Russian government now directly competes with the West on various fronts, both economical and political. Genuine freedom of expression and the rule of law are long gone and the state has grabbed all political and economic power that matters. Putin's term "managed" or "sovereign" democracy really means a particularly malignant form of Tsarism or Fascism. In her 2004 book Putin's Russia: Life in a Failing Democracy, Anna Politkovskaya correctly observed that the brutality in Chechnya was an omen of Russia's future cruelty to all its citizens. For a long time the West refused to notice. It should have woken up during the second Chechen war but instead there was only isolated protest in Europe and the USA, primarily from private bodies like the Jamestown Foundation and Italy's Radical Party. When Putin seized all influential media the West opened one eye then shut it again. When Khodorkovsky was jailed the same thing happened, and when the murder of dissidents and journalists became commonplace more observers expressed alarm though government criticism in the Western Alliance remained rather muted. This license to kill spread beyond the borders of Russia with the murder of Alexander Litvinenko in the UK at a time when Tony Blair was almost embarrassingly amicable with Putin. More detailed information on the Litvinenko murder is available in Death of a Dissident: The Poisoning of Alexander Litvinenko and the Return of the KGB by Alex Goldfarb and Marina Litvinenko, and The Litvinenko File: The Life and Death of a Russian Spy by Martin Sixsmith. The media now portrays Putin as a hero that rescued the country from the "chaos" of the 1990s since the political class has revived the Soviet habit of revisionism. And it uses the Orthodox Church for spreading the ideology of patriotism and Russian nationalism, a policy that inflames xenophobia resulting in violent racist attacks on non-Slav and non-Russian citizens. There have also been signs that this church is reverting to its infamous history of antisemitism. Militarism and imperialism are integral to the new nationalism although Lucas believes that the aim is the "Finlandisation" of Europe rather than territorial expansion. In the West Russia has plenty of paid propagandists plus the romantically deluded species known as Russophiles for whom this failed state with its history of genocide, sadism and misery can do no wrong. Lucas charts the rise of Putin (explained in horrifying detail in Blowing Up Russia: The Secret Plot to Bring Back KGB Terror) and

Published by Thriftbooks.com User , 14 years ago
The author describes step by step how freedom was curtailed. How Russia is moving backward. How they have in the end not looked to the West but to their Soviet and Tsarist past for a model. How the Kremlin has created a system of "authoritarian bureaucratic capitalism" in which economic stability is valued more than freedom. Mr. Lucas then describes the new threat from Russia. They are using their, new weapon, billions and billions of dollars from vast natural resources to attack our weakness: money. But the Edward Lucas does not leave us hanging. He outlines a winning foreign policy. The US and EU must unite to win this new war by securing supplies of gas and breaking Russia's growing monopoly and we must stand behind small ex-Soviet states like such as Estonia, Latvia, Lithuania and Georgia. If we don't we will lose the New Cold War and a new Soviet Union could well be resurrected. And voters this November, beware, this Kremlin has endorsed Mr. Obama for President.

Published by Thriftbooks.com User , 14 years ago
Should be required reading at every university and by every elected politician. Lucas intelligently describes how the U.S. and EU are ignoring the dangers of a powerful, self-possessed Russia just as they did after the second world war. And look where it led then? Lucas succintly points out that instead of a war-torn, financially weak Russia, this time we face a resource-rich, financially wealthy, nuclear-armed adversary, bent on conquering the world. Wake up America! Those who think Russia's attempted dominance is a joke or who believe there is another side to the story should spend serious time in urban and rural Russia.

Behind a façade of democracy

Published by Thriftbooks.com User , 14 years ago
The book provides a trenchant analysis of Russia's identity crises in the past two decades. The quests for that identity are still continuing and becoming increasingly dangerous for Russia's near and far neighbors. Edward Lucas argues, that the Kremlin has been unable to define its ideology after the end of the Cold War, and instead has filled up ideological vacuum in Russia with anti-Westernism. Russian leaders seek to win hearts and minds of people inside, and even outside Russia, by throwing down a gage to Western values, disputing their very existence. The book proves their attempt has so far been partly successful, as far as foreign businesses dealing with Russia are concerned. Readers will be caught up by Lucas' talent to juggle with historical facts, figures and web sources to prove his statements, no matter whether that is the total annual amount of bribes paid in Russia ($ 240 billion) or the assessment of Putin's German language skills (passable). His aptitude to bring those into play is at least as efficient as the Russian president's answers in his annual tele-press conferences. The author's word of warning for Western business and political leaders is not to be complacent and talk airily about "a strategic partnership" with Russia at the time, when the idea, that peoples of the Eastern Europe might genuinely wish to be in alliance with worlds free countries is dismissed as sentimental nonsense. Every Russian investment, as discussed in the chapter seven, is politically loaded expression of foreign policy made by Kremlin Inc., but energy dialogue between Russia and the West "resembles a battle-hardened chess grand master playing against a bunch of inattentive and squabbling amateurs". Instead talking about non-existing partnership he advises Western leaders to take a strategic pause, which would send to Russian politicians a powerful signal, making it obvious, that their thinking doesn't lead to a new civilization but a dead end.
Trustpilot
Copyright © 2022 Thriftbooks.com Terms of Use | Privacy Policy | Do Not Sell My Personal Information | Cookie Preferences | Accessibility Statement
ThriftBooks® and the ThriftBooks® logo are registered trademarks of Thrift Books Global, LLC