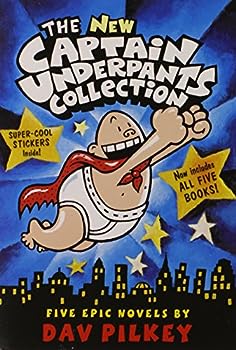 (Part of the Captain Underpants Series)

It's got FIVE times the action FIVE times the adventure FIVE times the Flip-O-Rama Now you can have the first FIVE Captain Underpants books in one boxed set Tra-La-Laaaaa Join George and Harold on... This description may be from another edition of this product.

Dav Pilkey is a genius!

Published by Thriftbooks.com User , 16 years ago
"NO POTTY TALK AT THE TABLE!" I yell at dinner almost every night. Why would I want to encourage my kids with books like Captain Underpants? Just read one! Dav Pilkey is a genius. The plots are silly but the brio and incredible energy are contagious and anything but retrobate. These books crackle with humor, action, and fun. Honestly, if you aren't at least moderately amused yourself (never mind your kids) check your pulse. How do my kids feel? My six year old son reads these by himself in a single sitting and periodically laughs out loud. Sometimes he laughs so hard he ends up on the floor rolling around. Am I really going to stand in the way of this kind of fun? George and Harold riff off the age old issues of the powerlessness of kids and the fantasy of possessing cosmic power in a readily accessible comic book form. Invariably some kind of threat to the world (monsters from space, mad scientists, etc...) are defeated by our class clowns Harold and George with the help of their school principle (hypnotized and possessed of magic powers) Captain Underpants. There's some very light comic book style violence, but mostly there's clever tech and lots of slapstick hoodwinks and hijinks. It's not going to win the Nobel Prize for Literature or anything - but it's aimed right at kid's entertainment monkey bone. There's plenty of lightly scatalogical humor (boogers and potty stuff). When I mean light, I mean light. For example our dynamic duo pranks a stick in the mud classmate by rearranging the sign that originally read "Please wash your hands after using the toilet" to read "Please wash your hands in the toilet" - and then he does. This had my little son in stitches. Kid's know it's joking - and it's exactly the kind of joking they do with each other. As a parent I'd rather he were reading science or literature than this drivel - but it's a smart move. As a jumping off point for reading - for emphasizing the important message that reading is fun - there is no equal to this series. It's fun, silly, easy to read, and loaded with street cred. Kids will find it irresistible and will actively choose to read. My little son really fell in love with reading devouring Captain Underpants. Then we kept him well stocked with books and encouraged him to read and now he's moved on to more serious stuff.

Published by Thriftbooks.com User , 17 years ago
My 7 year old daughter stumbled across her older brother's copies of Captain Underpants... for some reason, the series never struck his fancy. But my 7 yo LOVES these books!! I understand another reviewer's concern about the spelling, but a parent can also encourage a child to point out all the places where George and Harold spelled something incorrectly. It's empowering when a kid sees a word misspelled and can point it out and say how it should have been spelled. You know how kids love to point out when someone is doing something *incorrectly*. ;-) The thing I like the best about this series is that the humor is INTERESTING!! Yes, definitely off color, but not inappropriate for the age group these books are written for. Until this series came along, I was very disappointed in the bland, boring plots of books that are supposed to captivate kids' imaginations and make them eager to read. The humor in Pilkey's books is easily accessible, fun, and totally tickles some kids' fancy. What better way to stimulate interest in reading!! Silly stories about kids, underpants, potties, boogers, and wedgies... very silly and fun stuff. I highly recommend this series.

Published by Thriftbooks.com User , 19 years ago
I first got these books for my son a couple years ago when I couldn't get him to read anything else. Well, he read these books and really enjoyed them. Now he will read other books, but these are still among his favorite. My daughter is much more interested in reading, but she loves Captain Underpants, too, and thinks it's great fun to read the books out loud to me. And they are pretty funny. Some of the humor is even aimed at adults! The Captain Underpants series even inspired my daughter to write a little book about Captain Cam the Mysterious Man for an assignment that, if I may brag, was much more advanced in terms of plot development and in the creation of a protagonist and an antagonist than what her other first grade peers came up with. True, these books encourage that potty humor that kids of this age seem to find so darned amusing, but they grow out of it. You can always offer other books in addition to these, and in the meantime, Captain Underpants gets them to read. 'Nuff said.

Published by Thriftbooks.com User , 20 years ago
What can I say about Captain Underpants? Well, I know he's faster than a speeding waistband, more powerful than boxer shorts, and, heck, he can even leap tall building without getting a wedgie! And you can see it all (isn't this an exciting review) in these 5 action packed books, full of Action, Thrills, Laffs, More Action, More Laffs, More Flip-O-Rama, Tons-O-Fun, Lots-O-Laffs, Flip-O-Rama, Romance (just kidding), and terror. Wanna hear more?George and Harold, two elementary school boys, make comics. Naughty comics. Dog Man, Timmy the Talking Toilet, The Amazing Cow Lady, and everybodys favorite, the amazing Captain Underpants. They spend hours and hours writing Captain Underpants comics, and sell them at school. I'm not going to tell all the details because it'll ruin the book, but they eventually turn their evil principal-Mr. Krupp-into Captain Underpants! Well, at least he thinks he's Captain Underpants. He goes out to save the day and gets into a mess of trouble, but it all ends well, or so George and Harold think, for what they don't know is that every time someone snaps their fingers, Mr. Krupp turns into none other than Captain Underpants! They find this out in book two, when the boys place a picture of an army of evil talking toilets into a photo scanner that make anything you put in it real! Uh oh! But how did the invasion of the incredibly naughty cafeteria ladies from outer space (and the subsequent assault of the equally evil lunchroom zombie nerds come about? Well, duh! Space alien lunch ladies who replace the original lucnch ladies who quit due to the offense taken from an insulting comic book from Georg & Harold. But that's not all the problems they have. They've yet to face the perilous plot of Professor Poopypants (actually Professor Pippy Pee Poopypants), in a really cool story in which you can see what your alternate name would be (mine's Zippy Chucklefanny)-and then there's the wrath of the wicked wedgie woman! Will you like these books? YES. Anyone will. I'm sure young kids will, and I do, and I'm 13, and my Dad likes them, and he's 55! He laughed more than I did! I hope to see more of the legendary CU in the future...it's a dangerous world out there without 'em! Now, do me a favor and click the "Helpful" button...

My son cannot get enough of Captain Underpants

Published by Thriftbooks.com User , 20 years ago
My son started reading these books in the second grade. Now in the third grade, he's already reading bigger books like Harry Potter, but his favorites are still Captain Underpants. We had to go to the library and get them all and then at birthday time and Christmas, different relatives each bought a book so he now owns the entire set. He gets me laughing with the jokes. He came up to me and said "Knock Knock". I of course answered with "Who's There?"... "I'm a Pile Up" he says.... when I answered "I'm a pile up who" (which sounds just like "I'm a pile of poo") he roared with laughter and went back to his Captain Underpants books to find more things to "get me" with. He evens reads them to his 5 year old brother. They are actually getting along with each other as they sit on the floor and read together. I never thought stories about boy humor would make me so happy. And the language in these books is fairly tame. If you can handle the word "poop", you shouldn't mind these books at all. 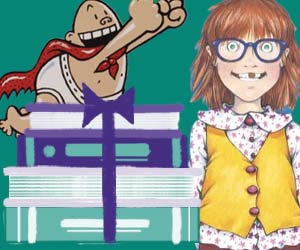 What’s better than a book for a holiday gift? A bunch of books from a favorite series! If you’ve got young and/or young adult readers on your holiday shopping list, you’ll find a whole slew of options when it comes to picking out a gift set from a popular series they love—or will love to discover.