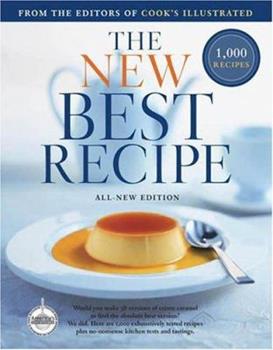 The updated version of a best-selling classic Flagship book of award-winning series with more than 1000 pages and 800 illustrations. Would you make 38 versions of creme caramel to find the absolute best version? The editors of Cook's Illustrated did. Along with 20 versions of simple recipes such as coleslaw. Now fully revised and expanded this new edition offers more than 1000 recipes for all your favorite dishes from roast chicken and macaroni cheese...

ONE OF THOSE MAMMOTH COOKBOOKS

Published by Thriftbooks.com User , 17 years ago
I'll be honest. I've never really been one who likes these huge, mega-recipe cookbooks as I've always preferred smaller, more specialized books. This one did come as a surprise as a friend loaned it to me who just raved about it. The recipes are culled from the pages of Cooks Illustrated Magazine which I am not overly familiar with. With a 1000 pages and 1000 recipes, you're sure to find a LOT that you can use. One thing important to note is that these recipes are not simply thrown into the book. Cooks Illustrated tests these receipes in their kitches many times, evaluating all facets of the recipe from ingredients and preparation to cook times and equipment. More than just recipes, the book acts as a guide to everyday kitchen techniques, many designed for the novice but certainly still valuable to more experienced cooks. There's also great advice on buying cookware and utensils, as often your receipes are only as good as the equipment you use to make them. Everything from simple casserole dishes and crockpot favorites to more elegant receipes can be found within its pages. The receipes are VERY step-by-step, obviously written for the beginner in mind and will ensure a great meal everytime. Add to that the editors have put in a generous helping of over 800 illustrations perfectly complement the well-written and well-tested recipes. If you are going to own just one of these massive type cook books...toss out Betty Crocker...Give the Joy of Cooking the heave-ho...let the Gourmet Cookbook gather dust, and pickup this fantastic book. Simply put it's the best of its kind anywhere! Highest recommendation.

Published by Thriftbooks.com User , 17 years ago
I consider myself an experienced cook but I have had frustrating experiences with cookbooks and recipes I'd find in magazines and newspapers. Something would sound wonderful, I'd buy ingredients, spend hours cooking and the results would be...OK. Not terrible, not inedible, but a disappointment none the less. Even cookbooks that I love and contain recipes I think are wonderful would also have recipes that I found pretty so-so. In fact, in many cookbooks the ratio of successes to non-successes is pretty small. Finding The Best Recipe (the edition that preceded this one) was a revelation for me. Each recipe I tried was a success. When The New Best Recipe was published, I bought one immediately and was thrilled to find so many new recipes. This is now my go-to cookbook, the first place I look when I want to find a recipe, and a book I check other recipes against when considering recipes from other sources. I use this book in the way my mother used the Joy of Cooking when I was growing up in the late 60s and early 70s. And just as Joy was the book she used when she needed a recipe for a classic like beef stew or a then fashionable food such as quiche or cheese fondue, The New Best Recipe has recipes for classics (spaghetti and meatballs, pot roast, coq au vin, shrimp scampi) and also has recipes for foods that have hit the American culinary radar more recently such as pad thai, beef fajitas, and pozole. In fact the huge range of foods is one of the things that makes this cookbook so wonderful; for instance, the pasta section includes recipes for lo mein, tuna noodle casserole and ravioli. This is a great book for beginners because of the detailed explanations of how the ultimate recipe was achieved which include discussions of different techniques that were considered or used and why they were rejected, as well as the many sidebars which give information on technique and equipment. Plus there is nothing that teaches you to cook like cooking, and nothing that keeps you cooking as much as having success. But it is a book that an experienced cook will find just an interesting and useful. I have been cooking for years and I have learned from this book. This is not (and does not represent itself to be) a low-fat cookbook. The recipes are about achieving maximum flavor and taste. It is also not (and does not represent itself to be) a cookbook full of fast recipes. However, this book contains so many recipes that low fat and fast recipes can be found among them. The recipes are always clear and easy to follow, and the results will speak for themselves. I love cookbooks and have many but if I were forced to have only one cookbook, this would be the one

Published by Thriftbooks.com User , 17 years ago
I'm the Baker. When my husband-to-be first came to my house to cook me a dinner, he rummaged through my cabinets and said "Where are your pots and pans?"; then he looked through the pantry and fridge and said "Where is your FOOD?" I had to explain that, in my vocabulary, "cook" is a verb meaning "to put into a microwave on high for 4 to 5 minutes." Food? Small boxes in the freezer, of course. I tell you this so you'll understand how improbable it is that the first thing I tackled from "The New Best Recipe" was chicken stock. A real-deal chicken stock, I'm talking here--the kind that turns to a jelly when cooled, is deep gold, and can improve nearly any dish you add it to--the kind that takes eight or ten hours to make, the classic way. See, I had picked up this massive (1028-page) book in the bookstore and idly opened to the Soup chapter, where I read a three-page explanation of how to make real chicken stock in one hour. They detailed all the blind alleys they'd explored in trying to come up with the perfect recipe for stock--the different cooking techniques, times, ingredients--until they'd found a way to make rich golden stock in an hour. The technique was, er, unorthodox to say the least, but it all seemed to make perfect sense, so I bought the book and decided to try to make a stock to present to the Cook as a fait accompli. Holy smoke, it worked! And I gotta tell you, if I can make a couple quarts of chicken stock between the time my daughter gets home from school and the time my husband gets home from work, then you can too. So, enough anecdote; now for details. ---------- 1. The book is a compilations of recipes from Cooks' Illustrated magazine and the America's Test Kitchen TV show (which I've never yet seen). The title seems presumptuous: "best" according to whom? Isn't "best" a matter of taste? Well, yes, but they are at pains to describe for nearly every recipe just what they MEAN by "best." Here's an example, for pound cake: "...the main difficulty with pound cakes of the classic type is textural. Cakes might be said to have five 'texture points': moist/dry, soft/hard, dense/porous, light/heavy, rich/plain. To contemporary tastes, cakes must be relatively moist and soft; the three remaining texture points are negotiable. "The problem with pound cake is that we ask it to be moist and soft on the one hand but also dense, light, and rich on the other. This is an extremely difficult texture to achieve unless one resorts to baking powder, with its potent chemical magic. Air-leavened cakes that are light and soft also tend to be porous and plain, as in sponge or angel cakes; moist and dense cakes inevitably also turn out heavy, as in the various syrup-soaked Bundt cakes that are so popular. From pound cake, we ask all things." Or for broiled salmon: "We set out to find the best way of cooking a whole side of salmon, enough to feed eight or more guests, in the oven. We wanted fish that was moist but not soggy, firm but not cha
Trustpilot
Copyright © 2022 Thriftbooks.com Terms of Use | Privacy Policy | Do Not Sell or Share My Personal Information | Accessibility Statement
ThriftBooks® and the ThriftBooks® logo are registered trademarks of Thrift Books Global, LLC