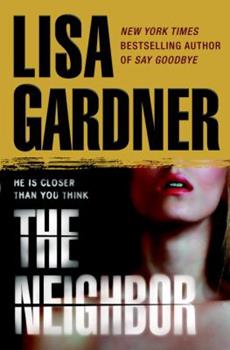 When a young wife and mother disappears from her suburban home, it's not long before the cops have their first suspect: the missing woman's husband, whose behavior is distinctly suspicious.

Published by Lori A. Meyers , 1 year ago
Detective/mystery that failed to gather momentum until the last 50 pages. There were chapters that could have been left out and you would never have missed them. I was really expecting a more intelligent fast paced story based on the reviews and thought most of the book repeated points over and over again which made for a very boring mystery.

Published by Thriftbooks.com User , 13 years ago
This was by far the best Lisa Gardner book I have ever read (and I've read all her books) not to mention one of the best overall books I've ever read. I just couldn't put it down and hated for it to end. I can't wait for her next book to come out!

"There are things that once done can't be undone."

Published by Thriftbooks.com User , 13 years ago
In Lisa Gardner's "The Neighbor," Jason Jones and his twenty-three year old wife, Sandra, appear to be a normal American couple. He works nights as reporter for a Boston newspaper and she is a conscientious middle school social studies teacher. They dote on their adorable and precocious four-year old, Clarissa, whom they call Ree. However, nothing in a Lisa Gardner novel is ever straightforward. When Jason and Sandra married, he was thirty and she was eighteen. Neither one revealed to the other certain horrific secrets that they preferred to keep buried. As Sandra says, "It seems we go longer in silence all the time." Her husband has a tendency to be morose, since "he believed at all times that the worst could happen." The trouble begins when Jason comes home from work early one morning and finds his wife missing with Ree asleep in her bedroom. Jason knows that Sandra would never willingly depart without Ree. Did someone abduct Sandra or did she leave of her own accord? Working on the case is thirty-eight year old Sergeant D. D. Warren, a "dedicated [homicide] investigator and hard-core workaholic." With no useful conclusive physical evidence, there is not much that D. D. and her colleagues can do. However, they are looking both at Jason and his neighbor, Aidan Brewster, a convicted sex offender. Since Jason is egregiously uncooperative when the police question him, the cops soon suspect that he knows more about his wife's disappearance than he is willing to admit. Brewster is a pathetic loner who works in a garage, goes home, eats dinner, and watches television. He is required to report to his probation officer regularly. "The shrinks have a term for it: pretend normal," he says wryly. Since he had met Sandra briefly, it is not inconceivable that Aidan took an interest in this pretty young blonde. Gardner teases us with subtle hints, but only slowly reveals the big picture. We wonder why Jason is so silent and testy when he is questioned by the cops. Yet, even the most jaded individual must acknowledge that Jason appears to be a phenomenal father who knows exactly how to handle Ree's moods. He does everything in his power to make his little girl feel special and loved. The scenes between Jason and Ree are tender and poignant. Questions that are raised but not immediately answered are: Why does Jason spend hours huddled over his computer? Where does Sandra go when she occasionally "takes a break" from her family? Why does this couple avoid discussing their childhood experiences with one another? As we get to know each character through affecting first-person accounts and flashbacks that alternate with third person narrative, we begin to sense that separating fact from fiction will prove to be extremely difficult. Gardner builds up suspense brilliantly and wraps up her story with a series of genuine surprises and a final clever twist. "The Neighbor" is an edge-of-your seat thriller in which Gardner explores the way

Published by Thriftbooks.com User , 13 years ago
Boston Dailey reporter Jason Jones comes home one night to find his beautiful wife Sandra is missing and their preschool daughter Ree is alone. He searches the house for her until he realizes she was no where to be found. He waited three hours more before calling the cops. Sergeant Detective D.D. Warren questions Jason, but comes away uneasy as the man holds his daughter while refusing to cooperate with the authorities; Jason denies Warren access to the computer or his car. D.D. immediately assumes Jason is a person of interest, but there is also another man in the neighborhood who could be connected with Sandra's disappearance; Aidan Brewster is a registered sex offender. Although there is no physical evidence to tie Aidan or Jason to the missing Sandra, the cop believes the woman is dead and one of these two men killed her. Her father, a judge, who has not spoken to her in years, arrives with the intention of gaining custody of his granddaughter. Sandra once warned Jason to never allow her father alone near Ree. Jason is doing his best to keep the police from arresting him for his daughter's sake, but fears his secrets will destroy his efforts if discovered. Lisa Gardner gives her audience a chilling terrifying glimpse of what goes on behind closed doors. The neighbors thought the Jones were the perfect family, but deadly secrets if known would have ended that illusion. This thriller is a one sitting read; filled with characters who have broken laws to prevent an even bigger tragedy from happening. There is plenty of action and misdirection that keeps readers spinning as to what is going on especially with Sandra and Jason. Lisa Gardner is at her best with THE NEIGHBOR. Harriet Klausner

The People Next Door

Published by Thriftbooks.com User , 13 years ago
When a pretty young schoolteacher disappears, leaving her 4-year-old daughter alone in her home, suspicion immediately focuses on her (apparently) mystified husband. But there's more to this story. Much more. There's the neighbor down the street, a convicted sex offender. And various colleagues and students of the teacher, all of whom couldn't help noticing how attractive she was. And her father, who may or may not be--well, never mind. You get the picture. Now, Gardner's wonderful cop regulars have to sift through a mountain of suspects and an ocean of motives in their race to find her. Preferably alive.... This is my second Lisa Gardner novel. I read HIDE a couple of years ago, and now I'm definitely going to read more. What I love about her books is the talent she shares with other faves like Harlan Coben, Ruth Rendell, and Mary Higgins Clark--she shows us the dark, dangerous possibilities in "ordinary" lives. In her stories, the victims and suspects are people like you and me, and the nicest neighborhoods can mask the ugliest secrets. This is domestic suspense at its best, a thriller set in a world we all recognize. Highly recommended.

Suspense until the end....

Published by Thriftbooks.com User , 13 years ago
What a great addition to my Lisa Gardner Library. The Neighbor has several "suspects" and a "victim" who is a mystery herself. I started reading this morning..can't put it down..the pizza hut guy should be here with dinner anytime...I just had to finish it instead of fixing dinner. That happens when you are reading a great book! Enjoy!
Trustpilot
Copyright © 2022 Thriftbooks.com Terms of Use | Privacy Policy | Do Not Sell or Share My Personal Information | Accessibility Statement
ThriftBooks® and the ThriftBooks® logo are registered trademarks of Thrift Books Global, LLC