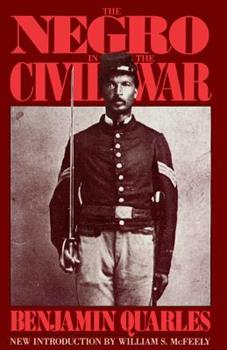 The Negro in the Civil War

Quarles writes powerfully about the role of three-and-a-half million blacks in the South, who were impressed into non-combatant service building forts and entrenchments, working in factories and mines. In the North, black Americans fought with distinction on the front lines, shedding blood for an ideal-emancipation-that was cruelly betrayed during Reconstruction.

A Study of the African-American Civil War Experience

Published by Thriftbooks.com User , 17 years ago
Benjamin Quarles's "The Negro in the Civil War" first appeared in 1953, before the Supreme Court's watershed decision in Brown v. Board of Education. At the time the book was written, little public attention was given to the role of African-Americans in the Civil War. This situation changed dramatically only with the movie "Glory" which brought the charge of African-American troops on Fort Wagner, South Carolina in July, 1863 (days after the Battle of Gettysburg and the fall of Vicksburg) into public consciousness.In some respects, including its terminology and writing style, Quarles's book shows its age. But the book remains an excellent introduction to the many ways in which African-Americans participated in the Civil War. In its understanding of the causes and results of the War, the book still has a great deal to teach the reader today.In the eloquent "Foreward" to the book, Quarles describes the Civil War as an immediate consequence of the institution of slavery. This is an important insight, and it was not the most commonly accepted view of the Civil War in 1953. (It is still debated today.) Quarles also takes a very positive view of the United States and of the ability of the American people to realize and reshape the ideals that were partially expressed in our country's founding documents and to work to realize the liberty of all people within our nation. He views the Civil War struggle and the role of African-Americans within it as imbued with patriotism and idealism. He takes a hopeful view of the ability of our country to move forward and implement its ideals. Quarles thus explains eloquently how the Civil War remains highly important in understanding the United States and where it is going.The book covers the military, political, and social history of African-Americans in the Civil War. By the end of the War, African-Americans comprised approximately 8% of the Union Army. Quarles describes the role of African-American soldiers in the Battles of Fort Wagner, mentioned above, Petersburg, Wilson's Landing, Nashville, and Milliken's Bend. (He is very short with Fort Pillow and the massacre of African-American soldiers by troops of Nathan Bedford Forrest). The book covers the recruitment of the African-American troops, their enthusiasm and commitment, and makes clear the great role they played in the War effort.The book includes an excellent study of the President Lincoln's actions culminating in the Emancipation Proclamation in making the end of slavery an express goal of the War. He also describes how, in 1863, the conduct of the War changed from a relatively limited conflict aimed at supressing the succession effort to a total war with the goal of changing the fabric of American society. There is considerable emphasis on General Sherman and his destructive march though Georgia and South Carolina.There is fascinating material in the book about African-American schools before and during the Civil War era. Quarles describe
Copyright © 2020 Thriftbooks.com Terms of Use | Privacy Policy | Do Not Sell My Personal Information | Accessibility Statement
ThriftBooks® and the ThriftBooks® logo are registered trademarks of Thrift Books Global, LLC