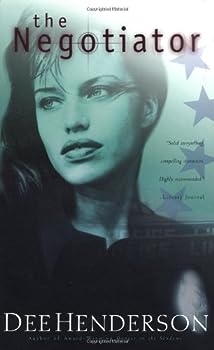 FBI agent Dave Richman from Danger in the Shadows is back. He's about to meet Kate O'Malley, and his life will never be the same. She's a hostage negotiator. He protects people. He's about to find out... This description may be from another edition of this product.

Love this O'Malley series of books! Captivates you from the beginning. Dee Henderson is a great Ch

Published by Debrom , 3 years ago
Loved it all! Read it you will too!

Published by Miranda , 3 years ago
Each book make you want to know more about the family.

The Negotiator is a page turner that will captivate you.

Published by Thriftbooks.com User , 20 years ago
"The bomb goes off at 11:15. The plane is talking to the tower. Tell Kate O'Malley I haven't forgotten the past." Just when Kate thought that her week couldn't possibly didn't get any worse, she heard the message threatening to blow up a plane and had a personal message directed at her. As a hostage negotiator she was used to being able to handle situations like this and bring them to a peaceful resolution. She was also used to threats from those convicted through her job as a negotiator.This time however, the rules are different. In the midst of all of the chaos her sister Jennifer and new friend Dave expect her to turn to the God that she blames for the turmoil in her life. One night when she can't sleep she reads the book of Luke and writes out the questions that she has. Jennifer and Dave really want her to believe, but don't they realize that it's not that simple? Believing is about trust, and Kate's life experiences have taught her not to trust easily.Will Kate be able to overcome the obstacles that arise when she is tied directly to the bombing that caused the deaths of 214 people? How will Kate react when she is brought face to face with a past that she thought she had left behind for good?This was an excellent novel. I found it hard to tear myself away from the characters and either go to work or to bed. I enjoyed meeting the O'Malley family and continuing getting to know Dave from "Danger in the Shadows" where he protected his sister Sara.

Published by Thriftbooks.com User , 21 years ago
I would have given The Negotiator more stars actually. Wow is the first thing that comes to mind. I couldn't stop reading it, and that's hard for me. Especially since it's part romance, which at first turned me off, but the mystery and suspense kept my interest when first reviewing it.Boy was I glad I did!! It was riveting from beginning to end and I absolutely can't wait to read the next in the series. I just finished it today and just HAD to share it.I love this book and the characters because they are all strong independent people, yet vulnerable. Like Kate O'Malley, the main character in the novel. Kate is a negotiator who orphaned at age 9 and became part of the O'Malley family with 6 other orphans. She becomes a target and it begins with a man in a bank with a bomb. You don't even realize that's the whole kernel of the pop until later on. She's strong, independent, intelligent, funny, sensible, logical, (all the things we women are ;) )everything you would want in a strong female lead. She doesn't take no for an answer and goes after what she wants but is open minded and will give in when it's right. While negotiating with a man with a bomb in a bank, she meets Dave Richman, he's with the FBI. And yes, they fall in love (what did you expect?) Together they unravel a mystery that seems like any other disaster to something very personal and very dangerous.Anyway, Dee Henderson puts a lot in one book, love, suspense, and religion. Surprise, I wasn't expecting that at all. All the themes flowed seamlessly, none overbearing or annoying, all points were creates equally to give a balanced story. And what a story.This is only 2nd book I've read where I haven't had to stop and roll my eyes because it was either too mushy or corny. It's was very realistic. Something that could happen in real life, the reactions, behaviors and feelings. All real. That's why I couldn't stop reading it, it was as if Dee Henderson brought someone's real life into a book. I guarantee you will LOVE this book, if not, when you write your review, you can tell me off. :)

Published by Thriftbooks.com User , 21 years ago
What is a family? For the O'Malleys it has nothing to do with blood, who as orphans decide to become a family. Each one has a unique talent that serves mankind but their loyalty is to the family. So when one hurts they all do, especially Kate when she learns her sister's secret. Dee Henderson running high on the triumphant success of DANGERS IN THE SHADOWS has returned with her promised THE NEGOTIATOR; delicious Dave's story. FBI agent Dave Richman finds himself trapped in hostage situation, hidden from the captor but not the police negotiator. All becomes quite complex however, when the negotiator is a woman which terrifies Dave. Yet, Kate is like no other negotiator or woman he was seen before and quickly takes command of the captor with no help from him. What he can't understand is his sudden attraction to her and why that bothers him? Kate O'Malley. as a police negotiator, had thought that she had seen it all. Of course who would have thought that a cocksure FBI agent would find himself a hidden element in this scenario. Now she has to keep her captor cool and the agent from doing anything stupid. But Dave is not stupid as he quickly realizes that Kate is one exceptional negotiator let alone woman. A woman he wants to get to know more, something that has always eluded him as he cared for his sister. Yet, as he later meets her family he senses that making time with Kate is going to be no easy task. But there are other even bigger hurdles to jump for both Kate and Dave.Ms Henderson has crafted a vividly intense story of a young woman's search for answers to a child's strange past, accept without fear the love of a man she has come to cherish and how it is all possible when one accepts God's love. This story takes the reader on a incredibly plotted roller coaster ride full of suspense sure to keep the reader's heart in their throat as an especially evil element surfaces from Kate's past. THE NEGOTIATOR is the first of a number of planned O'Malley books; save keeper space because the men and woman of the O'Malley's are sure to learn what being wrapped in God's love means for each of them. Ms. Henderson's work has always been considered gourmet Inspirational Romance, but those who read other romance genre' need only to tantalize their palates with any of her wonderful offerings to learn what a truly gifted storyteller she is.

Published by Thriftbooks.com User , 22 years ago
Get two copies, one to keep and re-read and one to share with friends! Have read it twice already and enjoyed it both times! Dee Henderson has the wonderful ability to combine friendship, family, caring and crisis in this can't put it down story. Find her web page and read her other stuff also - you won't be disappointed! I may need to start a support group for "fans waiting for the next Dee Henderson book"..........keep up the great work Dee!

Published by Thriftbooks.com User , 22 years ago
The O'Malley family is a tight group bound by love for one another. They met as orphans and formed a unity so strong each one changed their surname to O'Malley. Kate was the one who was at the orphanage the longest, having been taken out of a bad environment when she was nine. She serves as a loving, surrogate mother to her brood even as she works as a hostage negotiator for the Chicago police force.Kate does not readily trust people so her life turns complex when she meets FBI agent Dave Richman during a hostage situation and finds herself attracted to him. He reciprocates her feelings even though both know there is no hope for a relationship to form. He strongly believes in God while she rejects the thought of an omnipotent being. When someone blows up a plane killing two hundred people, the perpetrator links Kate to the vicious crime. Kate and Dave work closely together trying to uncover a nasty felon even as their attraction blossoms into love.Dee Henderson has written a triumphant inspirational fiction tale that has wider appeal than just to genre fans that will cherish this superb novel. The O'Malley clan is a dynamic family who to the elation of readers will each have their own story told. Kate's exciting tale is a woman's search for faith and love that is so beautifully narrated that the audience will place this on the O'Malley keeper shelf.Harriet Klausner
Trustpilot
Copyright © 2022 Thriftbooks.com Terms of Use | Privacy Policy | Do Not Sell or Share My Personal Information | Accessibility Statement
ThriftBooks® and the ThriftBooks® logo are registered trademarks of Thrift Books Global, LLC