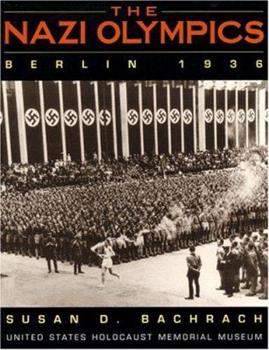 "Here is the story of the 1936 Summer Olympics in Berlin during which the German Nazi Party attempted to turn the Games into a propaganda vehicle for its own political agenda. This fascinating book,... This description may be from another edition of this product.

Published by Thriftbooks.com User , 18 years ago
The book I read on the Holocaust was called The Nazi Olympics: Berlin 1936 by Susan D. Bachrach. This book is about the Olympics held by the Nazis. In this book, it tells about the steps Nazis took to hold the Olympics. It also tells you where exactly the Olympics were held. This book is not a book that actually tells a story, it is a factual book that tells facts and gives you images to describe the facts. Adolf Hitler was head of Germany's Government. In 1931, Berlin was chosen as the site of the 1936 Summer Games. After World War I, Hitler and the Nazi promised a "new Germany" that would give to those many Germans who were fearful to the future. Soon Germany was turned into a police state for "Aryans only". As the year of 1936 came closer and closer with the Olympics, people questioned whether the Olympics should be held in a country whose ideology ran counter to the ideals that inspired to the Games. Many participants questioned the same thing.

Published by Thriftbooks.com User , 19 years ago
This large and attractive book tells the story of the 1936 Summer Olympics held in Berlin. Many Americans have heard of them, though their knowledge is limited to the fact that Jesse Owens, an African-American, won four gold medals, humiliating Adolf Hitler. This book tells the story of those Olympics from the choice of venue in 1931, through the rise of Hitler and National Socialism, the Nazi racial policies, the movement to boycott the games, the Olympics themselves, and finally on to the aftermath of the games and the Holocaust. Following the texts are some wonderful appendices on the chronology of the games, statistics on the 1896-1936 Olympics, and a list of nations participating in the 1936 Olympics. But don't stop there! After the index is collection of in-color reproductions of posters and artwork connected with the 1936 Olympics. This book is absolutely wonderful! It covers everything you ever wanted to know about the 1936 Olympics, and even quite a few things you never would have thought to ask. Although this book is placed under Ages 9-12 category, it is very informative, and a must-read for anyone who wants to understand those games. I highly recommend this book!

Published by Thriftbooks.com User , 20 years ago
The most striking feature about The Nazi Olypmics is the layout. Photos from the Library of Congress, National Holocaust museum, and a variety of personal and corporate collections are nicely arranged. The illustrations emphasize that Nazi propaganda convinced participating countries that the 1936 Olympic Games were going to adhere to the Olympic code and be inclusive of all peoples and faiths. Magazine covers, newspaper headlines, political cartoons, and pictures of segregated Nazi and Jewish sports clubs reinforce the point that Nazi ideology was (and still is) directly opposite the Olympic code, in spite of Hilter's assurances to the contrary. Occasionally, the graphics take over and result in a two page spread of captioned photos that detract from the text but in most cases, the captions are brief or enclosed in a separate boxed section of information. The writing is clear, but the subject matter is recommended for grades 6 and up. Rachbach places the Olympics in perspective of the political upheaval and the Nazi dictatorship that ensued, rather than relating just a history of the Olympics, or a rundown on record breakers and medallists (these details are included, but always admirably within the historical context). Rachbach not only focuses on the prejudice in Germany; she also informs the reader of the racism against African-Americans and anti-Semitism on the homefront. The coverage of boycotts (both potential and realized) of athletes and countries is excellent. The author notes the positives that came out of the Olympic games, such as the new record set by Jesse Owens, and the quality of the athletic facilities in Berlin. Two appendices include a list of locations of the summer games from 1896-1936, and a list of participating countries in the 1936 Berlin games. The chronology, index, and suggestions for further reading were excellent. Although published to capture the audience of the 2000 Games, the 1936 Games are an interesting topic and will be a good resource for students studying the Holocaust who want to go beyond concentration camps and battles, or a tool for teaching about anti-Semitism and other prejudices.
Copyright © 2022 Thriftbooks.com Terms of Use | Privacy Policy | Do Not Sell My Personal Information | Accessibility Statement
ThriftBooks® and the ThriftBooks® logo are registered trademarks of Thrift Books Global, LLC