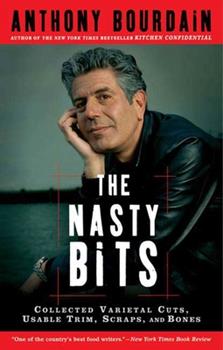 New York Times Bestseller The good, the bad, and the ugly, served up Bourdain-style. Bestselling chef and Parts Unknown host Anthony Bourdain has never been one to pull punches. In The Nasty Bits , he serves up a well-seasoned hellbroth of candid, often outrageous stories from his worldwide misadventures. Whether scrounging for eel in the backstreets of Hanoi, revealing what you didn't want to know about the more unglamorous aspects of making television,...

Published by Thriftbooks.com User , 15 years ago
If you like Mr. Bourdain's show "No Reservations", you'll most likely enjoy this book. One of Tony's best attributes is his story telling ability and reading this book is just like listening to his narratives on the show. Once or twice it was a little too much like the show. The Vegas article repeated some things he said on that episode of the show a bit too much. But most of the book seemed very fresh. His honesty and sense of humor shine through constantly. He's not afraid to admit he used to like heroin while noting that no one is less sympathetic towards other people's habit struggles than an ex-addict. His point of view is cynical yet refreshing. I especially enjoyed his articles about Mexican kitchen workers. I am a white guy in an area where whites are a very small minority and it is easy to get into the "damn Mexicans" mindset. Tony reminds me I don't really want to be like that and he's right. Each of the articles in this book stand alone so you can read them in any order. They're divided into sections so you can read what you are in the mood for - light, heavy, synical, silly. It's all there. And thanks, Tony, for the Namibia episode of N.R.. I laughed so hard it hurt. As for the people who say Tony should be smarter than to eat the stuff he does in faraway lands, boy do they miss the point.

An Older, Wiser Bourdain returns in The Nasty Bits

Published by Thriftbooks.com User , 16 years ago
Lately, my Monday nights have been pretty well booked what with Tony Bourdain's irreverent, wild look at the world in his new series, No Reservations. I also respect him as a writer and traveler, what with his view that is no-nonsense, honest, and downright brutal at times. This time, instead of covering a world tour, or dishing up dirt about the food industry, Bourdain assembles a collection of columns that has written throughout his career, and that were published in a series of magazines and newspapers. But if the reader is expecting a rant along the lines of what he wrote about in Kitchen Confidential, it's not quite what they are going to find. The collection opens with an introduction with Bourdain enjoying a freshly caught seal among an Inuit family in the Arctic -- it's a bit gory, but everyone's enjoyment and bonding over a shared meal is refreshingly human to see in a world where most meals are hasty affairs, with little communication. Bourdain's columns range from life on the road, in airports, his anger at the general public, reflections on celebrity chefs -- the article about Rocco DiSpirito is one that everyone should read about the fleeting nature of fame, and the perils thereof -- from discovering that Singapore is not the hellhole that he thought it was on his first visit, a happy return to Vietnam, and of course, commentary on the state of cuisine in America. Each article is only a few pages long, and fits into a section that Bourdain has named after the five tastes - salty, sweet, sour, bitter and umami -- and each reader will find something to fit their own tastes in these pages. Finally, there is a great little fiction story about a restaurant on Christmas Eve, and those savvy about New York City will recognize the characters therein. As with nearly all of Bourdain's writing, it's not for the sensitive. He makes no apologies for his attitudes, and doesn't pander to anyone's sensibilities. His anger at political correctness in food -- especially for those who think that fois gras is wrong -- can get palpable, and at the treatment of kitchen labour, the 'raw' food movement, and the general attitude of food fads is certainly in your face. If you can handle that, and don't mind the use of Anglo-Saxon vernacular -- Bourdain is one of the few writers that I've read who can curse well and not make it sound stupid -- then this book is a feast for the senses. But when he can talk about food that he enjoys, it's a delight. No one can write what I think of as 'food porn' as well as Bourdain. The words flow seductively, making the reader's mouth water, and start wondering about new and exotic tastes. The article on a sushi bar in New York City damn near made me blush, and heartily wish I had the megabucks to lay down for such a delightful meal. So too is the article about Ferran Adria's revolutionary work in Spain that is transforming the food world. But his articles also inform, and for those who want to know if a restaurant is

Published by Thriftbooks.com User , 16 years ago
Art-cuisine one-upsmanship is incresingly out of hand. Showcase restaurants are more and more divorced from the roots of good eating: the economical, parsimonious, and HUNGRY tradition of farm, field, and woods. When Anthony Bourdain writes, whether it be about commercial kitchens, or Bistro food, or artsy platings, or variety meats, or his adventures to the culinary hinterlands, he is always criticizing one thing: the sissifying of food [and chefs] in the art-cuisine market. He disdains the fussy, the hyper-refined, and the decorative. His criticisms in Nasty Bits are just as spot-on damning and funny as we've come to expect after reading Kitchen Confidential and The Les Halles Cookbook. He enthusiastically celebrates the simple pleasures of skillfully-prepared simple dishes, returning time and again to our hunger and our need for sustenance and flavor. In Nasty Bits he travels the world in search of intense and intimate food adventures. He eats seal with an Inuit family, and his description is alive to the newness and immediacy of the experience. But these world travels do not, by any means, lead to an embrace of 'fusion' cuisine with all of its forced assimilations and jarring collisions. He is a food realist: he operates within the larger economy, as nearly all of us do, but with a real regard for the basic dishes that evolved out of specific places before refrigeration and multinationals. Without indulging in specious pseudo-intellectual arguments, pro or con, as so many food writers-cum-cultural critics do, he references appetite and taste. These are certainly the first and second reasons we eat. What he disparages so eloquently are all the OTHER reasons we eat: to impress, to be seen, to scratch the itch of dilettantism, to celebrate our wealth, etc. He practices a robust, forthright, honest culinary craft in which ingredients are embraced for their sensual properties, their ability to satisfy, and even their ability to restore an effete appetite to its rightful place at the groaning board. This practice in no way rejects subtlety. In fact, his pleasure in seasonings and perfect doneness is a constant theme in his cookbook and in his accounts of adventure-eating. But he practices a CRAFT, which is not the same as ART. This approach recalls Jacques Pepin's humble and beautiful assertion that he is a technician, not an artist. The distinction is, I think, crucial: art-cooking comes out of the culinary schools and the old French hotel-kitchen traditions, while the craft Bourdain admires comes out of the tradition of farming, hunting, and foraging. His tastes run to the honest and robust. That said, he's also captivated by the chemical-whimsical innovations of Ferran Adria. We have the luxury of choosing, of course. But it would be disingenuous to state that our choices are independent of our cultural values. Where art-cuisine celebrates the convenience and mobility of the modern world, the farmhouse tradition celeb

Provocative Read on Culinary Gossip and Issues. Buy It.

Published by Thriftbooks.com User , 16 years ago
`The Nasty Bits' by chef, novelist, and culinary bad boy TV and print journalist, Tony Bourdain is a collection of thirty-six (36) non-fiction pieces and one fictional fragment from various American and Australian English language culinary journals and other miscellaneous mags such as `Playboy' and `Rolling Stone'. The pieces are cleverly, if somewhat arbitrarily divided into six chapters, titled by the five flavors on the tongue, Salty, Sweet, Sour, Bitter, and Unami, plus `A Taste of Fiction'. Many of the pieces are an update to the subjects Tony covers in his best known book, the memoir, `Kitchen Confidential', plus commentaries on his adventures while doing various TV shows and personal appearances since he hung up his toque as executive chef of Les Halles in New York City a few years ago. I am happy to say that while I was never very impressed by the few Bourdain pieces I read in `Gourmet', almost all of these pieces have something interesting to say to the lover of culinary gossip. Bourdain is almost unique among the current crop of culinary celebrities. I have often seen it written that he is a better writer than he was a chef. In my reading, I think this is quite true, since I find his pieces as engaging as the very spicy memoir from Gael Greene and `almost' as literate as the writing of the great M. F. K. Fisher. His one cookbook of recipes from Les Halles is worth reading more for the way Bourdain writes about his very simple recipes than for the recipes themselves. Bourdain's primary interest is as an iconoclast and as a guide to the dirty underbelly of the culinary world. It is no surprise that he quotes as one of his primary inspirations, a passage from George Orwell's `Down and Out in Paris and London' where we see the all the filth and acrimony behind the swinging doors in the kitchens of some very famous restaurants. Bourdain is famous, for example, of dissing the current icon, Emeril Lagasse. He also belittles England's golden boy, Jamie Oliver and even takes on the reputation of the American culinary godhead, James Beard. My initial reaction to this debunking is to remember the comment that to a butler, the master of the house is always a smaller figure than he cuts in public, because he is only being seen from a butler's point of view. For example, I find Jamie Oliver's contribution to the culinary world to be far greater than the simple body of his recipes. Oliver is pushing the culinary envelope, much the same way as Bourdain, but in an entirely different direction. But then, I read Bourdain describe what he finds interesting and valuable about Oliver and fellow Brit, Nigella Lawson, and I discover that this is exactly what I respect about these and the other major Brit food writers, Nigel Slater and Tasmania Day-Lewis. They seem to capture the `joie-de-vivre' of everyday food in a more genuine way than our favorite American culinary cheerleaders such as Rachael Ray and Paula Deen. So, while Bourdain's primary currency i