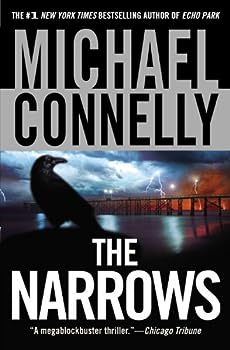 This description may be from another edition of this product. In the depths of the Nevada desert, FBI agent Rachel Walling and former LAPD Detective Harry Bosch must confront The Poet, a terrifying serial killer who leads them down a dark and twisted path. FBI...

Published by Joe G , 2 years ago
and ends in a revelation of keen detective insight.

Published by Thriftbooks.com User , 17 years ago
THE NARROWS continues the story of THE POET, a very exciting book which Connelly wrote several years ago. This story brings back Harry Bosch formerly of the LAPD and FBI Agent Rachel Walling. The two work together to find out if recent murders were committed by the man known as The Poet. It also brings back some of the characters from BLOOD WORK another Connelly novel. BLOOD WORK was made into a film with Clint Eastwood in the part of FBI Agent Terry McCaleb. THE NARROWS is a fast paced story and worth reading, especially if you've read the previous books.

Bosch, McCaleb and the Poet

Published by Thriftbooks.com User , 17 years ago
As absorbing and satisfying as ever, Connelly's 10th Harry Bosch thriller finds the former LA homicide cop investigating the death of another Connelly series character, Terry McCaleb. Terry ("Blood Work"), a former FBI agent and heart-transplant patient, died of a heart attack while on his boat, an apparently natural death.But his wife calls Harry when she discovers that powdered shark cartilage was substituted for Terry's essential heart medication. Terry had never stopped working murder cases and Harry, looking for his killer, soon homes in on one file in particular - six missing men - which has the hallmarks of a serial killing.Meanwhile FBI agent Rachel Walling ("The Poet"), assigned to the boonies since the debacle of that serial killer case, gets a long-dreaded call. Robert Backus, the Poet killer and former FBI bigwig - he was her and Terry McCaleb's old mentor at the FBI - has resurfaced, in the form of a GPS unit sent to Rachel at her old office. Following the GPS coordinates, the FBI is turning up bodies in the desert.Harry and the FBI collide when Harry, piecing together the clues in Terry's file, happens on the FBI's desert dig. Naturally the FBI has no intention of sharing, but Harry connects with Rachel, and warily, egos and agendas clashing, they pool resources. The action picks up as they track Backus to a desert brothel enclave, a grisly murder scene, and his next victim.Harry's narration drives most of the story, but point of view shifts to Rachel and Backus, keeping us informed from all angles. Subplots include Harry's growing relationship with his 5-year-old daughter, a tentative romance with Rachel, and a possible return to the LAPD.The investigation is smart and forensically intriguing, and the characters are prickly and complex, while Backus is truly scary, in an underplayed fashion. Connelly, a master, remains at the top of his game.

Reading this book by Connelly was like going home...

Published by Thriftbooks.com User , 17 years ago
everything was so familiar..the characters..the settings..the cases and crimes and of course Hieronymous Bosch, former detective in the LAPD. This author-driven novel of mystery and suspense is the best of the best. I would not have believed that Connelly could bring together so many of his characters and cases and blend them as smoothly as chocolate pudding. He certainly makes the reading tasty and leaves the reader hungry for more.Meeting Backus again, the villain from his best-seller THE POET, was thrilling and chilling as Bosch and Rachel Walling, exiled FBI agent, track down this cunning thought-dead serial killer. Backus has re-surfaced, his newest victim a close friend of Bosch who worked with him on many cases. Connelly has Bosch circling from the left and Rachel Walling circling from the right...both on a collision course that meets at a burial site in the Nevada desert and ends in the Narrows of the Los Angeles River. A comfortable lounger, a rainy day and Michael Connelly's THE NARROWS will lead you down a path of unbridled suspense and mystery, however you might want to read it in bright sunlight surrounded by friends and family if you are feint of heart.Now that Bosch is back, we hope that Michael will sate our hunger for him in another novel...very soon. I must add that Connelly's adherence to police and FBI protocol is amazing in that it is ever-present and precise yet so well incorporated as to not overwhelm the reader. Thank you for another great one Michael. I hesitate to say this is your best because you keep making them better and better...this is the best so far and I eagerly await the next.

The Return of the Poet

Published by Thriftbooks.com User , 17 years ago
Some years ago, I read a pair of novels by Michael Connelly, back when pretty much no one knew who he was. The Black Ice and Black Echo were pretty good detective novels, but they were also pretty formulaic. The character was the typical slob loner, obsessed with catching bad guys and unable to form a meaningful relationship with a woman unless she was in the department and the relationship itself was work-related. I've followed Connelly's career from there, and worked my way through his books as they've come out (with the exception of Lost Light, which I have but haven't read yet). He's grown tremendously as a writer, adding layers to his characters, his prose style, and his plots. Several of those plots (notably Blood Work, the Poet, Angel's Flight, and the Concrete Blonde) are standouts in detective fiction, so cleverly written that the mystery's just wonderful, and adds layers to the story.Here, the plot is more straightforward. Terry McCaleb, the protagonist of Blood Work, has been killed. Though he and Harry Bosch (Connelly's main character in most of his books) didn't really get along well in life, McCaleb's widow, Graciela, is concerned that his killing wasn't the heart attack it seems, and asks Harry to look into it. Meanwhile, Rachel Walling, the heroine of The Poet, is called out of exile from South Dakota. The FBI HQ in Quantico has recieved a strange package, addressed to her, which leads them to a stretch of desert on the road between LA and Las Vegas, where they discover ten bodies buried in the ground, and strange indications that it might be the same Poet. Their stories merge partway through the book.This is one of the most satisfying books I've read in recent years. I will admit that Connelly's choice to jump between first person narration (with Bosch doing the talking) and third person (mostly following Rachel) was a bit jarring at first, but I got used to it. There are most of the Connelly touches: an enigmatic character who just fades in and out in one scene, but will be recognizable to Connelly fans as Cassie Black, the thief heroine of Void Moon, and of course Connelly's almost encyclopedic knowledge of Southern California. He even gets things like the place to hold a large retirement party right.I like Michael Connelly, and I especially liked this book. I would highly recommend it, though people who haven't read other of his books might want to look into a few others, first.

The Best Only Gets Better

Published by Thriftbooks.com User , 17 years ago
Looking for proof that Michael Connelly is the best mystery novelist today? The Narrows is evidence enough. On a very simple level, this is a mystery novel about a serial killer, "The Poet," and at least 14 murders attributed to him in this current wave of mayhem. It's also about a complex ex-LAPD homicide detective, Harry Bosch, and a frustrated FBI Behavioral Sciences Unit reject agent, Rachel Walling. The characters are complex, conflicted, believable, and stretched beyond what is expected but not beyond the potential of each soul. Even the two major locations, Los Angeles and Las Vegas, are drawn with such intensity and multi-faceted power that they almost become characters in themselves. The plot is intricate, surprising, and challenging -- but ultimately so finely composed and exquisitely executed that even the final shock in the last few pages, while completely unsuspected, still resonates with complete authenticity and credibility. And underneath everthing beats the heart of Michael Connelly's mission: to describe the deadly dance between good and evil, a dance that comes within a hair's breadth of consuming both, but ends with hope. The book opens with the powerful intensity of the threat of evil: "I knew that my life's mission would always take me to the places where evil waits, to the places where the truth that I might find would be an ugly and horrible thing. And still I went without pause. And still I went, not being ready for the moment when evil would come from its waiting place. When it would grab at me like an animal and take me down into the black water." And it ends with the dawn of hope: "I looked out at the city and thought it was beautiful. The rain had cleaned the sky out and I could see all the way to the San Gabriels and the snow-covered peaks beyond. The air seemed to be as clean and pure as the air breathed by the Gabrielenos and the padres so many years before. I saw what they had seen in the place. It was the kind of day you felt you could build a future on." And in between is the best fiction anywhere.
Copyright © 2020 Thriftbooks.com Terms of Use | Privacy Policy | Do Not Sell My Personal Information | Accessibility Statement
ThriftBooks® and the ThriftBooks® logo are registered trademarks of Thrift Books Global, LLC