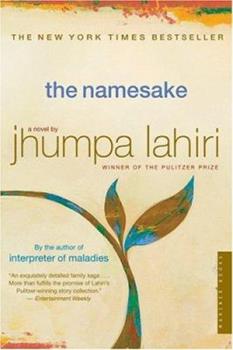 "Dazzling...An intimate, closely observed family portrait."-- The New York Times "Hugely appealing."-- People Magazine "An exquisitely detailed family saga."-- Entertainment Weekly Meet the Ganguli family, new arrivals from Calcutta, trying their best to become Americans even as they pine for home. The name they bestow on their firstborn, Gogol, betrays all the conflicts of honoring tradition in a new world--conflicts that will haunt Gogol on his...

Published by Thriftbooks.com User , 14 years ago
"The Namesake" is the story of Gogol Ganguli, a man born to Indian parents who moved to America shortly after they were married. Gogol's name has always been a source of deep resentment for him, as it is neither Indian or American. Eventually Gogol opts to have his name legally changed before he leaves for college. In addition to adjusting to his new name, Gogol continues with a struggle he's faced his entire life: How to relate to and maintain his Indian culture while living on American soil. Gogol rejects most things about his heritage, preferring to lead a more "Americanized" lifestyle. His choices create a barrier between him and his family, but try as he might, Gogol never feels completely at ease within the American culture, either. He establishes a successful career for himself and has has several serious relationships, but Gogol never really finds a comfortable place for himself in this world. Eventually he finds happiness with an Indian woman, of all people, who relates to him on so many levels. However, Moushumi has her own way of rebelling, and at the end of the novel we find Gogol back at the very place his life began, where he begins to rediscover himself. I fell in love with this book after reading the first few pages, and I couldn't put it down. I enjoyed it even more than author Jhumpa Lahiri's collection of short stories, "Interpreter of Maladies." Lahiri writes in a simple yet emotional style that is rich in detail. Although the novel revolves around Gogol, Lahiri occasionally shifts perspective and gives the reader a glimpse of the story from the eyes of Gogol's parents and Moushumi. All of the characters make a lot of mistakes, but I was able to easily relate to and empathize with each of them. This is a book about family, identity, heritage, and self-discovery. You don't have to be the child of immigrants in order to relate to the process of pulling apart from your family and discovering the person you're destined to become. I think this book has something to offer everyone, and it also happens to be a beautiful, poignant story. "The Namesake" is a must-read.

Published by Thriftbooks.com User , 14 years ago
Although this book can appeal to all 1st generation Americans (no matter ethnicity), as a Bengali boy myself, I felt as though I was reading a book that hits 90% of my life. Lahiri really captures the relationships, conflicts, and unspoken feelings - real life is usually very hard describe. In the end, I was very moved by this book - it makes you appreciate many things, including your family.

young Bengali discovers melting pot may be a bit too hot

Published by Thriftbooks.com User , 17 years ago
Some two hundred thirty years ago, an immigrant attempted to answer the vexing question his French parents had posed him: "What is an American?" His answer, famous for its clarity, ignited a debate that continues today. Hector St. Jean de Crevecoeur's thesis was that the American is a "new man," one who eagerly discarded the cultural traditions of his former home and just as passionately adopted the ethos of his newly adopted land, the United States. The American, de Crevecoeur, discards his former cultural heritage and completely "melts" into his new American charcter. It is the perils, costs and anguish of assimilation that Bengali author Jhumpa Lahiri explores in her brilliant debut novel, "The Namesake." Her exquisitely rendered protagonist, Gogol Ganguli, becomes the archtype for every immigrant who has wrestled with issues of conflicted identity, cultural confusion and humbling marginality. Through Lahiri's wise and sympathetic characterization, Gogol begins his odyssey towards Americanization even before he is born. His Bengali immigrant parents, whose marriage was arranged by their adherence to cultural tradition, cannot provide a proper name for their American-born son. Their patient but unrewarded anticipation of a "good" name for their son selected by a Calcutta matriarch, results in Gogol inadvertently acquiring a "pet" name chosen by his father. This duality, between Gogol's ethnic roots and his American birthright, perpetually torments him. Befuddlement, confusion and anger over unresolved identity occurs with dispiriting regularity across the span of Gogol's young life. Even at a traditional Bengali party celebrating his six-month-old status, the infant Gogol, "forced to confront his destiny," cannot and "with lower lip trembling," begins to cry. Ashima and Ashoke, his mother and father, wrestle as well with the burdens of adopting to a new nation. His father seems to assimilate with relative ease, but Ashima likens her immigrant status to a "sort of lifelong pregnancy...a perpetual wait, a constant burden." As a junior high school student, Gogol loathes his name, despondent that it is "never on keychains." Conscious of his differences, he is hurt by the snickers his parents' accent evokes from store clerks. By actions conscious and unintended, Gogol immerses himself in the American melting pot. It is not an accident that by the time he is an adult, he will live in New York City, a refracted image of "How the Other Half Lives," affluent but disenchanted, externally successful but internally impoverished. Jhumpa Lahiri seems to understand the enormous costs abandoning one's ethnic identity carry for immigrants who desire nothing more than to blend in. Her Bengali protagonist, acutely aware of his differences but unable to resolve his dual identities, comes to symbolize the anguished decisions all young immigrants must make as they carve out their paths towards becoming American. "The Namesake," in its treatmen

We All Came Out Of Gogol's Overcoat

Published by Thriftbooks.com User , 17 years ago
In "The Namesake" Lahiri once again produces a work of fine art and beauty. But her purpose is to look at the particular cross-cultural problems, especially for children of Indian parents, in the United States. After all, these children are Americans, not Indians. The emotional struggle to deal with that dissonance is finely described by Lahiri, perhaps better than I have ever seen it done before. The internal feelings, self-rationalizations and justifications, and the result of what environment and origin have on people and how that transition can be made, sometimes successfully, but mostly, with some problems and regrets, are beautifully elucidated.Lahiri's style is fine tuned and explicit. She is insightful and incisive. Her vocabulary is vast, but is not used with academic arrogance in any way. She has a crystal clarity about her writing that leaves little to guess for the reader, but much to ponder. Her subplots mesh seamlessly into a well honed novel.In addition, it is important that the reader not miss Lahiri's reference to Nikolai Gogol's short story, "The Overcoat." It really is impossible for the reader to miss, it is one of the main premises of Lahiri's plot. The reader is well advised to read the story before reading the book, as the plots are interwoven in certain non-obvious manners. But near the end, Lahiri tackles one of the main issues of everyone's life, her protagonist and that of "The Overcoat." She seeks to interpret in some way, how so many of the events in our lives seem out of our control, even random. Toward the end, Lahiri has her protagonist, named Gogol, say this: "In so many ways, his family life feels like a string of accidents, unforeseen, unintended, one incident begetting another." But as in "The Overcoat" Lahiri tries to tell us, that in some way, the soul can and does live on, in the hearts of those who remember. And just as in "The Overcoat" the remnant of the protagonist's soul remains, so too, the remnant of Gogol's father's soul still remains, in Gogol's memory, forever.

Published by Thriftbooks.com User , 18 years ago
First I must say that I waited very impatiently for Lahiri to write a follow up to 'Interpreter of Maldies', her Pulitzer Prize winning collection of short stories. That is one of my favorite books, so I was eager to see what she would do next. That level of expectation usually only serves to hurt a book, but 'The Namesake' is up to the task. Lahiri masterfully weaves a compelling story that doesn't fall into the trap that most short story writers get into when they write a full novel (inevitably most seem drawn out and boring, as if the writer is simply trying to fill the pages). The beautiful prose draws you into the story of Gogol, the son of immigrants from India named after the Russian author. 'The Namesake' is about the gap between Gogol and his family -- he born into America and wanting to fit in with our society, his parents unable to let go of the land they knew and the customs they grew up with. Gogol spends his life distancing himself from them and their ways, somewhat desperately trying to assimilate himself to the American way of life. It is a very relatable, very real story that feels close to the reader's heart and is true to life. This is all thanks to Jhumpa Lahiri, an author with a unique understanding of complex human emotions and an incredible ability to convey them to the reader. 'The Namesake' made the wait from her last book worth the while, and leaves you impatient for her next book all over again.

The Namesake Mentions in Our Blog 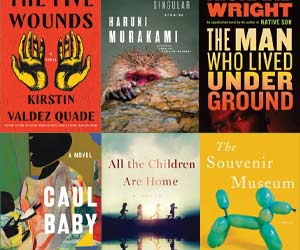 Our TBR piles may be weighing down our bedside tables, but that doesn’t stop us from perusing (and purchasing!) new books! Here are fifteen April releases that we can’t wait to pick up, along with suggestions for books you can read right away. 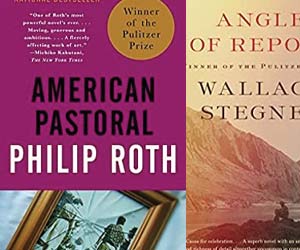