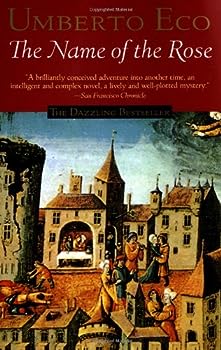 The Name of the Rose: including the Author's Postscript

An international sensation and winner of the Premio Strega and the Prix M?dicis Etranger awards, this enthralling medieval murder mystery explodes with pyrotechnic inventions, literally as well as... This description may be from another edition of this product.

Published by Thriftbooks.com User , 18 years ago
This is not a proper review, more a couple of comments about things which the first few reviewers missed (I didn't read all 157 reviews). One of Umberto Eco's perennial themes, expressed elsewhere in essays, is what he sees as the the similarity between the society of the "dark ages" and that of today. For instance he draws explicit parallels between the heretics and utopian communities of the past and contemporary cults such as Jim Jones, the SLA, the Red Brigades and so forth. This book needs to be read in the light of that; it's not just a historical novel about monks. There are also obvious references to the work of Borges in this novel, as well as to Sherlock Holmes (William of Baskerville?). And of course the theme of rationalism versus superstition (not to mention religious war) has been brought into considerably sharper focus by world events since the book was written.Overall, I can't see why people regard this as a hard book to read. Although there is a lot of historical background, (accurate rather than as some have suggested pseudo-philosophical or invented) it's presented in a vivid and entertaining way, the story keeps you turning the pages, and it's surely the only serious novel to include a recipe for fried cheese.

Published by Thriftbooks.com User , 21 years ago
I am amazed that this novel - the most popular, the best-loved, the most imitated in Italy during the latest 20 years- is so little known abroad. It is a very good historical novel, full of intense and fascinating characters, which can reliably belong to European Middle Age. Eco' s culture is immense: he can easily quote from Latin, ancient French or other languages. But the big mystery in this book is an ancient Greek manuscript, the book _On Comedy_ fom Aristotle's _Poetics_. It is very hard to believe that such a manuscript really existed, and, as a matter of fact, at the end of the novel it gets destroyed. A terrible loss for the main character, Guglielmo di Baskerville, but a dreadful victory for superstition and ignorance. Tje plot is very intriguing (it is a detective story). Some friars are murdered, and nobody can understand the reason...nobody excepting Guglielmo. Who is nothing but Sherlock Holmes, while his young assistant, Adso, is nothing but Watson...But the reference to Conan Doyle is not the real purpose of this splendid book, where you find such an enchanting gothic atmosphere as very rarely you can do. The real matter is the rescue of European culture, which nowadays seems to be overwhelmed by the so called 'globalization'. I suggest this reading to everyone, American, Asian or African people. The movie is not so bad...Jean-Jacques Annaud understood very well Eco's lesson. But the book is something very, very special.

Published by Thriftbooks.com User , 23 years ago
I loved this book when I first read it 6 years ago so much that it was one of the few things I took with me when I came to US. Reading NR is a many-fold experience, so many reviews are right about it. However I was deeply disappointed with the way Eco is published in English. You see, my Russian edition has about 70 pages of comments ranging from historical to theological ones. Who in this modern world remembers Dolcino or a difference between katars and minorites ?? It is nice when a reader is well versed in both Latin, medieval Deutch and some Italian but at least my Russian translator and editors went to great pains to help me, a reader, along the way. You can see so many comments (read those about "Pendulum", for example) that blame Eco for being a pompous intellectual while it is really the result of modern day education that does not prepare an average reader to deal with such a multi-layered work. Otherwise we would not have people asking about the meaning of last words in novel.Stat rosa pristina nomine, nomina nuda tenemus.With the past name of rose, names are shed (naked) in future.

Published by Thriftbooks.com User , 23 years ago
The word "name" in Italian is spelled "nome", not "noma". :) btw, I love this book. 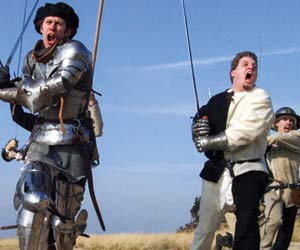 Get Your Ren Faire Fix with These Reads for All Ages
Published by Ashly Moore Sheldon • July 10, 2020
With lots of our summer traditions canceled this year, we are relying on literature to take us where we want to go. This week, Renaissance Faire reads for all ages!
Read Article
Trustpilot
Copyright © 2022 Thriftbooks.com Terms of Use | Privacy Policy | Do Not Sell or Share My Personal Information | Accessibility Statement
ThriftBooks® and the ThriftBooks® logo are registered trademarks of Thrift Books Global, LLC