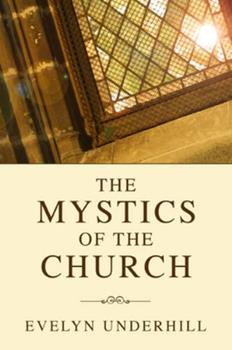 Mystics of the Church

Evelyn Underhill's classic book on mysticism shows not only the historic development of Christian mysticism and its influence on the Church, but gives a deep insight into the spiritual growth of the individual mystics, their struggles, achievements and influence. Covering the whole development of the Christian Church from St. Paul to the present century, the author illustrates the differing backgrounds and approach of many of the great mystics such...

The Mystics of the Church.

Published by Thriftbooks.com User , 12 years ago
_Mystics of the Church_, first published in 1925, by mystical writer Evelyn Underhill is a fascinating and detailed study of the mystics of the Christian church. Evelyn Underhill (1875 - 1941) was an English Anglo-Catholic writer who introduced to the Anglican world various medieval Catholic mystics. This book offers a good introduction to the mystics of the church, those fearless explorers who sought a unitive experience with God. Further, this book examines the role of mysticism throughout Christian history particularly in its relationship to the Christian church. As such, this book provides an excellent survey of the Christian mystics, their lives, and the development of their mystical experiences. This book begins with an "Introduction" in which Underhill lays out the case for mysticism. Underhill notes the importance of the words "mystic" and "mysticism" in various books dealing with religious experience. Further, Underhill explains how these words came to be used in a pejorative sense to refer to such things as "superstition". However, as Underhill notes the true definition of mysticism is "according to its historical and psychological definitions, is the direct intuition or experience of God; and a mystic is a person who has, to a greater or less degree, such an experience - one whose religion and life are centered, not merely on an accepted belief or practice, but on that which he regards as first-hand personal knowledge." Underhill explains the role of the Christian mystic and the corporate role of the church in the life of the mystic. Underhill also explains the Christocentric nature of the Christian mystic and relates this to such things as "illumination" and the "mystic union". The second chapter of this book is entitled "Mysticism in the Bible" and examines the role in particular of St. Paul. This chapter in particular notes the fact that the epistles of St. Paul are among the oldest books of the New Testament. Further, Underhill explains how St. Paul relates to the Hebrew prophets. The third chapter in this book is entitled "Mysticism in the Early Church". This chapter considers the following figures of early Christianity, Cassian, St. Augustine, and Dionysius the Areopagite. In particular, we see the value of the Greek Fathers, the Egyptian solitiaries, and the role of NeoPlatonism in the philosophies of St. Augustine and Dionysius the Areopagite. The fourth chapter of this book is entitled "The Early Middle Ages". This chapter considers the role of such figures as St. Hildegarde, Helfde, Richard of St. Victor, and St. Bernard. St. Hildegarde was an important female mystic, Helfde was a convent for nuns, and Richard of St. Victor and St. Bernard were important male mystics. The fifth chapter is entitled "Franciscan Mysticism" and considers the role of St. Francis of Assisi and the school of mystics that developed out of his teachings. This chapter considers the role of the following individuals, St. Francis, th

Great Introduction to the Mystics

Published by Thriftbooks.com User , 13 years ago
I used this book as an introduction to a the study of Christian Mystics. I found it very easy to read and very insightful about the different mystics in the Church. I would recommend this to anyone interested in learning more about the mystics before picking up the original texts themselves.

A fresh view of mysticism in the Christian tradition

Published by Thriftbooks.com User , 20 years ago
I read this book a number of years ago and am still amazed when I think of the impact it had.
Copyright © 2020 Thriftbooks.com Terms of Use | Privacy Policy | Do Not Sell My Personal Information | Accessibility Statement
ThriftBooks® and the ThriftBooks® logo are registered trademarks of Thrift Books Global, LLC