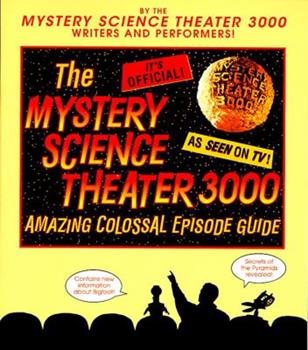 What is the mystery of Mystery Science Theater 3000? You may have asked yourself, "What the heck are these talking shadows doing in the corner of my TV screen, riffing away with plucky--and hilarious--abandon in the face of some really bad movies?" Or something similar.??The answer, my friend, is right in this here official, 100%-MST3K-sanctioned book. Or maybe you know all about the adventures of Joel, Mike, and the 'bots in the not-too distant future.??Then...

Published by Thriftbooks.com User , 19 years ago
OK, so this really only covers 6 seasons of the show, was written in 1995/96 and has nothing on the SciFi channel run. Still, for any fan of MST3K it is an indespensible guide to the show's history, and a hilarious tour of the best(worst) films ever lampooned on the show.As said above, the book covers the first 6 seasons of the show, with brief section about the infamous KTMA Public Access years and a short rundown on the truncated season 7 on Comedy Central. Each movie is first given a very funny synopsis and then an analysis is made by one of the writers. Usually it's completely bizzare, especially if the analysis is by Mike Nelson, the show's head writer. The synopsis' also include great lines like "I want to hurt this movie" and "please, PLEASE don't reveal the super secret ending of Manos:The Hands of Fate". Each episode also has a breakdown of the "host segments", the skits that serve as bumpers for the movie, and every so often TV's Frank(writer Frank Conniff) pops up with his thoughts on a particular movie experience. The book also chronicles the various monsters that have appeared in the films over the years, from Godzilla to Torgo.The history of the show is also included, from the birth of the idea to the conventio-con, expo-fest-a-rama held in 1995. It's all done tounge in cheek, but serves as a good guide to how the show went from public access obscurity to cult hit with it's own motion picture. If you ever loved this show, or simply want to decide who lives and who dies, you must own this book.

Published by Thriftbooks.com User , 20 years ago
First off, I would like to say that MST3K was the most brilliant, hilarious and creative show ever produced. They were snubbed by TV Guide in their top 50 shows of all time article.Now on to the book:This book has summaries and memories of all the episodes form seasons 1 though 6, the hayday of the show. The summaries of the films themselves rival the actual show for laughter value. Whether the synopsis was written by Mike (who I think is one of the funniest writers on the planet), Trace, Mary Jo, Kevin or Paul, they will make you heave with gutteral belly laughs. The memories of each episode are also very funny, and beyond that, pretty informative.The book also features a ton of other things, such as the story behind the creation of the series, answers to the top 50 questions asked, the making of the MST3K movie and much, much more.The only complaint I have about this book is that it only goes up to season 6. Although I think the show never regained the edge and hilarity of the the Comdey Central era shows (specifically seasons 4-7), I would still love to have a companion volume that takes care of seasons 7-10 and the movie.I highly recommend this book for all MSTies out there.

Great compendum to the show

Published by Thriftbooks.com User , 21 years ago
This is a beautifully done book, with insight from the writers on every show they ever did nationally. They are a few minor gripes tho, first they kind of skimped over the KTMA days, I would have liked to have seen more, they say that they don't want people to see these because they aren't very good(I have seen a few, and while not up to par with the CC and Sci-fi shows, they certainly are better than 99% of the stuff currently on tv), but they should have realized that only the hardcore fans(Of whom most have seen a KTMA ep) are buying the book, and more importantly, understand that they were a work in progress. The only other minor gripe I have is that some reviews are rather short, but I understand why, just like in every other television series, some shows are less memorable than others. The books other features more than make up for them however. The season intros are very interesting and give a perspective of what was happening in the studio during the times the episodes were being written and produced. Plus the compendum with the 50 most obscure references and some FAQs where very interesting. The most interesting thing to me however was the humorous explanation of the writing and shooting process they do for each show. Overall, if you are an mst3k fan, this is a must-have!

Published by Thriftbooks.com User , 21 years ago
This episode guide is a very informative,entertaining and supurbly thorough compaanion to the long-running cult favorite "Mystery Science Theater 3000".It keeps in the spirit of the show,retaining the laconic,surreal sence of humor,and inimitable knack for the obscure reference.You get a comprehensive show-by-show guide of the first six (out of ten) seasons with a description of the film they're scewering,plus a run-down of the bits in between the commercials,sidebars with descriptions of the monsters,mutants,and atrocious actors featured in each episode,plus a sly recap and reflection.Also,you get detailed background info on the stars and nimble minds behiond the show,and the robot puppeteers who bring(Ro-bot roll-call...!)Gypsy,Tom Servo,and Crow to life.If you're a geek about this show(like me),or just curious,this is the best book about MST3K out there.

For Those Lonely Hours In Between Episodes...

Published by Thriftbooks.com User , 25 years ago
When you're a MiSTie (an official fan of MST3K), you treat this book is like a bible. When you need to find out about obscure references made by the silouhettes, what the Best Brains in charge of the show thought of the episodes themselves, or just need to ask, "Why...?" all you need by your side is a copy of the MST Amazing Colossal Episode Guide. A tasteful insight behind every episode from seasons 1-6, with information behind the KTMA years, the movie, and the near-absent season 7, all drummed up by the minds behind our favorite show. This book stays true to everything MST3K, and doesn't jerk around with the fans. It makes you laugh while learning about the best show on TV at the same time. Picking up a copy of this book is like watching an episode of the show... you never know where it's going, and when it's done, you wish for more. It truly is the only thing for comfort during those endless hours in between episodes. -MSTTorgo
Trustpilot
Copyright © 2022 Thriftbooks.com Terms of Use | Privacy Policy | Do Not Sell or Share My Personal Information | Accessibility Statement
ThriftBooks® and the ThriftBooks® logo are registered trademarks of Thrift Books Global, LLC