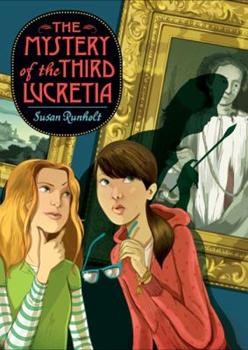 The Mystery of the Third Lucretia

If it hadn't been for Lucas's photographic memory, they might not have remembered the man. It had been almost a year since she and Kari noticed him copying a famous Rembrandt painting in the Minneapolis Institute of Arts. But now in the National Gallery in London, they spot the same guy, copying another Rembrandt. Then, when a never-before-seen Rembrandt painting is discovered in Amsterdam, the girls begin to suspect the truth. Convinced that no one...

Published by Thriftbooks.com User , 12 years ago
After reading a glowing review of The Mystery of the Third Lucretia, I knew I wanted to read it. When it came in for me at the library, I first read the author's biography, which begins "Susan Runholt shares a love of art, travel and feminism with her teenage heroines." I would add reading to the list, but I'm proud to share the other three with Ms. Runholt, Lucas and Kari. The Mystery of the Third Lucretia is the first (of many, I hope) Kari and Lucas mysteries. Kari and Lucas are best friends who live in St. Paul, Minnesota (a town I also happen to love). Kari's mom has one of the coolest jobs ever: she covers fashion and international culture for a teen magazine (if such a job exists, I would gladly apply for it.) Kari, who sees her father a few times a year, and Lucas, whose parents are eager to spend money for her to experience culture, often get to go along for the ride. The book takes place in St. Paul, London, Paris, and Amsterdam. The girls happen to find themselves trying to solve an international art mystery. I cannot say enough positive things about this novel. I wish it existed when I was younger, but I still loved it as an adult. I laughed out loud often, learned things (in a delightfully unpreachy way) and eagerly awaited the mystery being solved. Kari and Lucas are both real girls and inspiring to women (and men) of all ages. I am eagerly awaiting my turn to read the second Kari and Lucas mystery, Rescuing Seneca Crane, which came out in August 2009. I wish I knew more young women so I could give this book to them; I know it would have meant the world to me as a younger woman. Happy reading, feminists, art lovers and mystery fans of all ages!

Published by Thriftbooks.com User , 12 years ago
Kari's mother works for a magazine that sends her to Europe at least once a year to write stories. Usually, they manage to bring along Kari's best friend, Lucas. Together the girls sometimes play tourist while Kari's mother works. Occasionally, they help her with her articles. One trip to London proves to become a very different sort of trip than any of them imagined. While at the National Gallery, Kari and Lucas see an artist working near a Rembrandt painting of Lucretia. Before long, they become certain that they've seen this man before, only looking completely different. They saw him in the art museum near their home, also next to the other Rembrandt Lucretia. The man's covering up his easel so no one can see his work. He also has a distinctive growl when anyone gets too close. Kari and Lucas devise a plan to spy on the man, while changing their own appearances. In doing so, in order to understand what he's painting, they paint the objects they uncover by carefully sneaking glances at his work. During their next trip to Europe, they hear about a discovery of a never-before-seen third Rembrandt painting from the Lucretia series. Kari and Lucas begin to add up the clues and discover that this painting is not an original work, but who would believe them and what evidence do they have for proof? The first book in a series written in the first-person conveys the narrator's uncertainty about how to tell the story - there are many different possible beginnings, but Kari's voice rings true. While the reader can grasp the exact mystery from the beginning, they have fun solving the how and the why along with Kari and Lucas. Reviewed by: Jennifer Rummel

The Mystery of the Third Lucretia - a great escape with art, child detectives, and danger

Published by Thriftbooks.com User , 12 years ago
"This is the story of how two teenagers from Minnesota lived a tale of adventure involving a woman from ancient Rome, a seventeenth-century painter, forgery and murder, abduction and rescue, disguises and deductions, two continents, three museums, four countries, a criminal hideaway, and two nuns from Amsterdam's famous Quarter." -The Mystery of the Third Lucretia by Susan Runholt I was intrigued by this book from the start. Books with museums, child detectives, art fraud and adventures have always come through for me, ever since I stumbled upon E.L. Konigsburg's The Mixed-up Files of Mrs. Basil E. Frankweiler. I don't want to reveal too much about this book and think that the passage above tells you everything that you need to know. If it intrigues you, then I recommend that you get yourself a copy of The Mystery of the Third Lucretia. I'll limit myself to two sentences. The writing, characters, and adventure will not disappoint. I promise. That's it. If you're not drawn to the book, then it's likely not a fit. No worries - there will be plenty of other books for you and plenty of readers for these Kari + Lucas mysteries. I hadn't mentioned that The Mystery of the Third Lucretia is the first in a series, but it is! I love series books because I can get invested in the characters knowing that even if the book ends the adventures don't. The second of the series came out on August 20, 2009. The third is still in the works.

Published by Thriftbooks.com User , 12 years ago
The Mystery of the Third Lucretia is one of those books readers of all ages and genders want: a story that will immerse you in character and the world that lie within the pages. It's the first in a new series by a new writer, and I was totally blown away by how well Susan Runholt created her teen sleuths and plunged them into an art-based mystery while keeping the suspense tight and the chuckles at regular intervals. Officially, the Kari + Lucas series are for the YA crowd, I'm thinking more for the aggressive 9-12 year old readers. The serious YA crowd is looking for vampires, brand names, and sexual tension. You won't find those things in this book. Instead, there's a great story, teens that are of this generation that stay focused on friendships, exploring their world, and the mystery they've inadvertently stumbled onto. I love the two characters. Kari (our narrator) is a down-to-earth fourteen year old who enjoys the simple side of life and lives with her single mom, a magazine writer. Lucas (took me a while to get used to that name on a girl) is the daughter of rich, inattentive parents. Lucas is also the feisty one ready to dare anything while Kari likes at least a moment to weigh the risks before her curiosity and Lucas drag her into anything. The plot revolving around Rembrandt's two Lucretia paintings was awesome too. I wasn't familiar with them and I liked discovering the sad story that were behind them. Runholt does a lot with the Lucretia story, sticking up for women's rights, but she does it without throwing it into the reader's face. I had my willing suspension of disbelief bumped a few times with how events turned out. The fact that Kari and Lucas arrived at two different museums and saw the same guy there (in disguise) copying Rembrandt paintings was hard to take, but Runholt's story is so good you want to believe it and do. Then you get immediately swept up in the puzzle of why Gallery Guy (the girls' nickname for him) is copying the paintings. Although the plot is relatively simple, the progression of the mystery is well done. Runholt incorporates a lot of the surroundings of London and Amsterdam, and it's obvious the author has spent considerable time in those places. Kari and Lucas have to act to pursue the mystery rather than just hanging around waiting for it to unravel itself. One of the most charming things about the novel is Kari's first-person narrative. The words read so easily, and Kari's thinking and attitude come alive on the page. Runholt has a second mystery in the series coming out, Rescuing Seneca Crane, and has more coming. School librarians and parents wanting non-threatening kid-lit for mystery lovers would do well to pick up this series.

Published by Thriftbooks.com User , 14 years ago
If you're looking for a new book series to love, try this one! Mystery of the Third Lucretia stars Kari and Lucas, two funny, smart 14-year-old girls. They see a creepy guy up to no good in an art museum; and when they try to figure out what he's doing, lots of trouble starts. It's a really funny book -- I laughed on almost every page -- and really good action, with cliffhangers at the end of every chapter, so it's hard to put down. And there's interesting stories about art and travel, especially about Lucretia, the woman in the painting that started it all. My favorite part, though, is Kari and Lucas, and Kari's Mom Gillian. They're really funny and interesting and seem like people you know in real life - like a best friend. By the end of the book, you can't wait to read about what they do next. Definitely read this book!
Trustpilot
Copyright © 2022 Thriftbooks.com Terms of Use | Privacy Policy | Do Not Sell My Personal Information | Accessibility Statement
ThriftBooks® and the ThriftBooks® logo are registered trademarks of Thrift Books Global, LLC