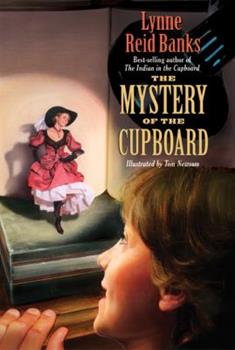 The Mystery of the Cupboard

(Book #4 in the The Indian in the Cupboard Series)

In the fourth book in Bank's acclaimed INDIAN IN THE CUPBOARD saga, Omri and his family move to an old farmhouse, where he finds an ancient notebook that reveals a family secret-and the mysterious origins of his magical cupboard.

It all started with the "Indian in the Cupboard"

Published by Thriftbooks.com User , 11 years ago
My nephews love this series. This is just one more book that offers them hours of reading enjoyment. Be sure to start with the first book, "The Indian in the Cupboard". That will get them hooked on reading (whether you read it to them or let them read it by themselves).

My Favorite Book From the Series, But a Little Disturbing

Published by Thriftbooks.com User , 14 years ago
Omri's mother inherits a country house in Somerset, and the family is glad to leave the horrible district (especially after the events of books two and three). The house belonged to her second cousin, whom she's never met, and he inherited it from his mother (her great aunt) whom she'd never met either. For some reason, her family always hated her great aunt, but wouldn't say why. They move into the house, where Omri finds a hidden diary. A theme of The Mystery of the Cupboard is forgiveness. Omri's mother, who inherits the house, had all these relatives who she never met. Omri's mother was incapable of forgiving some unknown mistake, and since nobody would say what it was, she never thought about it. Not only does the secret diary reveal why, but it shows how the cousin's hate and anger gave the cupboard its magic. In some ways, the cupboard was created out of hate, and needed to be found by a kid who could make himself happy. It reminded me of Charles dickens' "A Tale of Two Cities" where the villain (Defarge) is incapable of forgiving, and Dickens makes her the ultimate villain. Though she's a victim herself, he makes her look more evil than the people who killed her family. Dickens believed that grudges destroy people, as it does with Defarge, and that the power of forgiveness is a very strong one. In The Mystery of the Cupboard, Omri and Patrick have to make a choice of whether to reveal the cupboard's secret, or forgive the maker and move on. The first book in the series was great. The second had its funny moments (like the 1940's nurse and the corporal with the cockney accent). The third one was a bore. But The Mystery of the Cupboard is by far the best one. It has a more mature story than the previous installments, and the astonishing plot really pulls you in.

The Secret of the Cupboard's Magic, and the Woman who Put it There

Published by Thriftbooks.com User , 14 years ago
After the events of the 1st 3 books, Omri's mother inherits a country house (in Somerset) from her cousin, who she'd never met. Hidden in the roof is a diary; and in the diary is the secret of how the cupboard, and its key, got their powers. And it's not a happy story. The legend begins in London in 1900. Charlotte, the daughter of upper-middle class parents, chooses to persue a career as an entertainer. Her parents disown her; song and theatre are not an acceptable lifestyle for a girl of her station. Only her sister stays in contact with her, and rather condescendingly. Cut to 1918. The Great War is over and London is full of flags, fireworks, and cheer. Charlotte and her niece ride a horse in the parade, but underneath it all, Charlotte is full of envy, and that envy is turning into anger. In her sister's jewelry box is a pair of Aquamarine earings that were promised to Charlotte, then given to her sister. Charlotte intends to steal those earing. The results are disastrous. I won't tell you anymore, because I love this book and it compensates for the weakness of the 3rd installment. It also shows Omri and Patrick maturing further into young adulthood and comming to terms with the past. It's also about letting go. In the end, Omri attends the funeral of one of the few people that knew the secret of the cupboard. Instead of persuing things further, he leaves it buried-literaly.

The best mystery ever... By Cierra ,Geneva, NY

Published by Thriftbooks.com User , 18 years ago
Have you ever read the book The Mystery of the Cupboard by Lynne Reid Banks ? Omri moves into a new house, that was an old relatives, because he died.He finds his great great great aunt Jessica Charlotties note book.Omri learns about Jessica Charlottie's whole life until she gets sick and dies.Omri thinks that his mothers key will fit in the cashbox he found.I think it's a good story about life.I think this is a good book to learn about elders and history.I think that this book would be a great gift. The book is very interesting. I would recommend this book to everyone.

Published by Thriftbooks.com User , 22 years ago
This is the best one out of the Indian in the Cupboard books. It is filled with suspense and keeps you reading. The characters are interesting and the plot makes you think. A wonderful book even if you don't like Indian in a Cupboard.
Copyright © 2020 Thriftbooks.com Terms of Use | Privacy Policy | Do Not Sell My Personal Information | Accessibility Statement
ThriftBooks® and the ThriftBooks® logo are registered trademarks of Thrift Books Global, LLC