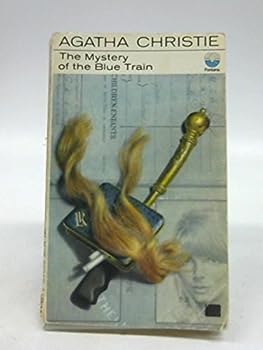 Mystery of the Blue Train

(Book #5 in the Hercule Poirot Series)

Robbery and brutal murder aboard a luxury transport ensnares the ever-attentive Hercule Poirot in The Mystery of the Blue Train, from Queen of Mystery Agatha ChristieWhen the luxurious Blue Train... This description may be from another edition of this product.

Published by Thriftbooks.com User , 12 years ago
Even though this isn't my favorite A.C. book, it definitely is worth reading. Her characters and plot twists are so engaging that any mystery fan will be hooked right up to the end.

Christie Is On Track With Excellent Tale of Murder/Robbery

Published by Thriftbooks.com User , 21 years ago
In his sixth adventure, Hercule Poirot is on board the famous Blue Train from Calais to Nice. He encounters four different people and groups of people who are all after the Heart of Fire, a spectacular ruby purchased by American tycoon Rufus Van Aldin and presented to his daughter Ruth. Ruth is unhappily married to British aristocrat Derek Kettering, a richly layered character about whom the reader is still trying to decide if he is hero or villain up to the final chapter. This novel is filled with exciting characters: Mirelle, the exotic dancer with a passion for Derek; Armand de la Roche, the attractive but notorious swindler; and most refreshing of all is Katherine Grey, one of Mrs. Christie's best heroines. When Ruth Van Aldin Kettering is found murdered on the Blue Train en route to her annual winter trip to the French Riviera, it is up to Hercule Poirot to discover if she was murdered because the famous jewel was in her possession or was she murdered by her husband or his mistress or was there yet another sinister motive. This excellent tours de force is a landmark book for Christie fans because from this point until sometime in the late 60's every novel she published was brilliantly plotted and never failed to challenge the mystery reader. Agatha Christie was known for experimenting with plots in short stories before developing them more fully in novels. The Mystery of the Blue Train is a prime example of this, so you might wish to go back and read her earlier short story "The Mystery of the Plymouth Express" if you enjoyed this one.

Published by Thriftbooks.com User , 21 years ago
Before "Murder on the Orient Express", there was the murder on the Blue Train, a luxury train which took the rich and famous across France to the Riviera. An American millionaire's daughter is garrotted, and he calls in Hercule Poirot to solve the murder. The cast of suspects is much smaller than in "Orient Express", but Poirot faces a "Herculean" task in sorting out the clues and bringing the killer to justice. An excellent plot and interesting characters make for great entertainment, but Christie once again gives her audience the idea that she really knows nothing about the mechanics of real-world murders. I can't discuss the details without giving away too much of the plot, but suffice it to say that the mechanics of ligature strangulation are such that the the killer would probably not have had to provide Poirot with the linchpin clue which helped solve the case. I audited the tape as I drove on a long business trip and enjoyed it tremendously. The reduced cast of suspects made the story much easier to keep up with than in most other Poirot mysteries I have audited.

Really Good and of course---surprising

Published by Thriftbooks.com User , 23 years ago
Okay now I'm only 13, but I have to say that I love Agatha Christie's books. This one, was very very good. It was interesting throughout the whole book, and the end was very surprising, you'll never guess it. It was a pretty easy read, but it is still a must read, and I really recommend it to anyone.

Published by Thriftbooks.com User , 24 years ago
I first read this book at the age of 13 and loved the story. I was also struck by the great atmosphere of England and the French Riviera created by Christie. I found the characters of Katherine and Derek sympathetic and believeable and that of Lenox, very sad. I also liked the way Poirot is able to bring them together while simulataneously pursuing the killer. My only complaint was that I felt the actual mystery was less complex than some of Christie's other works (like "The Murder of Roger Ackroyd"). However, the overall story was so enjoyable that I don't think anyone would care. Definitely one of my sentimental favorites for its happy ending and the way it leaves you with a feeling of optimism at the end.
Trustpilot
Copyright © 2022 Thriftbooks.com Terms of Use | Privacy Policy | Do Not Sell or Share My Personal Information | Accessibility Statement
ThriftBooks® and the ThriftBooks® logo are registered trademarks of Thrift Books Global, LLC