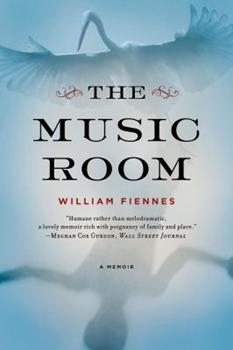 The Music Room: A Memoir

This is a song of home, of an adored brother and the miracle of consciousness. The chill of dark historical places coexists with the warmth and chatter of the family kitchen; the surrounding landscapes are distinguished by ancient trees, secret haunts, the moat's depths and temptations. Bursting with tender detail, The Music Room is a sensuous tribute to place, memory, and the permanence of love.

Published by Thriftbooks.com User , 12 years ago
Every once in a great while, I pick up a book, read the first paragraph, and immediately realize that I'm in for a big treat. "The Music Room" is one of those books. The story in this memoir is very simple. A young boy lives on one of England's great, old estates, passed down for hundreds of years through his father's family. He roams the great, unused halls, goes boating on the moat, visits the servants in the cozy, warm kitchen. Romantic and luxurious, right? Not really. Without realizing the implications, he watches his mother endlessly polishing the carved wood mantels and staircases; the family's life is constantly interrupted by festivals on the grounds and theatre productions; and his father is constantly writing grant applications for funds to keep the house in repair. The house is his father's heritage, both a source of strength and a burden. At the same time, William's family's daily life is dictated by his older brother Richard, who after a serious epileptic attack in his teens, is seriously damaged physically and emotionally. Richard is a person of great charm, unpredictable moods, and murderous rages. Yet the author loves him, as any younger brother would love the older. Young William muses over the description of Richard as "damaged," as if there existed some other version of Richard that's not damaged. To him, Richard is Richard. The author also traces the history of neurological research into brain disorders, and the discovery that electrical impulses play a key role. It's a lot to pack into a slim memoir, but Fiennes does it wonderfully. This book is gorgeously, beautifully written, every page. Check out the first page. You'll see.

Published by Thriftbooks.com User , 12 years ago
This book is a powerful, loving search into the dynamics of brain injury, and how the personality changes affected the author and his family. It's also a love song to this same dysfunctional person (author's brother) and his parents who nurtured their children. It's a bittersweet love song,and the author sings it beautifully.

Published by Thriftbooks.com User , 12 years ago
William Fiennes had an upbringing most of us can only dream about. He grew up in a stately home in Oxfordshire surrounded by history. But his parents had not only to maintain the house physically, they had to employ and direct staff as well as deal with hundreds of curious visitors every year. Living in such a home has a lot of strings attached, it seems. Fiennes description of the day-to-day maintenance of the home is absolutely fascinating. But the heart of the book is Fiennes relationship with his epileptic older brother Rich. Fiennes must have felt powerless as a child to help his brother. In this book, he researches the history of epilepsy and inserts them as chapters within the book. As useful as they may have been to Fiennes as an adult, I don't think they contribute much to the book overall. Rich's character, as Fiennes portrays him, is powerful enough in its own right. William obviously loved his brother very much and the mystery of Rich's character and the nature of his illness continues to haunt him.

a book of rare beauty and humanism

Published by Thriftbooks.com User , 12 years ago
Hardly ever does one have such a pleasure as while reading "The Music Room" a memoir by William Fiennes. The book is built around two characteristics from the author's childhood; two most memorable things that made the mark on his life. One is his elder brother Richard's illness, affecting family life to the utmost degree. The other is their family dwelling, a castle built in the Middle Ages, which reached its final form at the times of Tudor dynasty. The author's unusual family circumstances would perhaps already make a great story. The way he tells the story adds a lot to the whole - the form of his narrative, gentle, subdued, very English, but deeply emotional. The childhood memories of the house-castle, used as a setting for costume movies and guided tours, with the moat harboring fish and herons, and with hidden passages and uninhabited room are intertwined with the record of the progress of Richard's epilepsy and scientific notes on the history of brain research (very interesting per se). The descriptions of Richard's struggle with the debilitating illness and the attitude of the family are incredibly moving, tender and realistic. I can relate very well to the worry, love, care, exhaustion and tension created in the family when one of its members is ill. I could find all these feelings here, the picture magnified by the fact of being the memories of a child (Richard was William's senior by eleven years), intertwined with happy reminiscences of fishing, roaming the grounds surrounding the house and explorations of the house itself. William's loneliness emanates from the pages of this memoir, but he also holds no grudge, the love for his parents, Richard, and the other two siblings (who are less of a presence here) is almost palpable. Interestingly, I remembered W. G. Sebald when I was reading "The Music Room" although Sebald is cooler and more distanced, less focused on relationships, there is equal care for form and detail. I think that "The Music Room" is one of the rare books written honestly and delicately, balanced and moderate but poignant and memorable. Although the book is not voluminous, it remains with the reader for a long time.

Published by Thriftbooks.com User , 12 years ago
This is one of the best memoirs I have ever read, interesting and moving. The setting, a 700-year-old moated castle, and the author's older brother, suffering from severe epilepsy, provide an unusually interesting background for the author's memories. The author grew up in Broughton Castle, in Oxfordshire, England. It sounds like a fascinating place to live, but not particularly romantic as much of the family's energy is spent preserving the old crumbling buildings and their furnishings. And the author certainly doesn't put on any airs, his descriptions of his mother and father and siblings never mentions their titles or position. Instead we see them as very human as they deal with the many medical problems of Richard, their oldest son. The author skillfully weaves a history of epilepsy into this memoir and gives one a fuller appreciation of the scientific struggle to understand and treat this illness. This book is a remarkable achievement. Highly recommended.
Trustpilot
Copyright © 2022 Thriftbooks.com Terms of Use | Privacy Policy | Do Not Sell My Personal Information | Accessibility Statement
ThriftBooks® and the ThriftBooks® logo are registered trademarks of Thrift Books Global, LLC