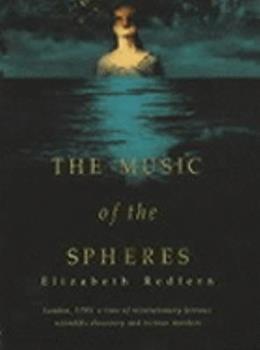 The Music of the Spheres

In eighteenth-century London, a killer walks the teeming streets. His victims are always young prostitutes with red hair. Before they die, they hear whispers that speak of stars. Of a woman named... This description may be from another edition of this product.

Published by Thriftbooks.com User , 20 years ago
ONE OF THOSE BOOKS YOU DON'T WANT TO END. LOOKING FORWARD TO HER NEXT BOOK!

Published by Thriftbooks.com User , 21 years ago
I picked this book up on a whim, just looking for something to help me pass the time on a long flight. I like historical fiction, particularly Edward Rutherford's books, and I also have an interest in the late 18th century. Those things combined with the fact that the author is from Derbyshire, a favorite place of mine, made the book look interesting enough to buy. The plot is essentially outlined in many of the reviews herein, so I'll skip that to say that I read the book in 2 days, and was completely captivated by the story. I had a few assumptions that proved nearly correct, but the author twisted things about enough to keep me interested and surprised on more than one occasion.

Published by Thriftbooks.com User , 21 years ago
Remembered for his readings of numerous audio books, including the Dune books and Morgan's Run, talented stage and screen actor Tim Curry seems to be ubiquitous as he makes simultaneous appearances in various venues. His energy level appears to be as high as is his unique ability to give voice to the sinister and enhance suspense. Such is the case in his rendering of Elizabeth Redfern's enthralling and atmospheric debut novel which takes place in 1795 London. There's espionage and evil walking the shadowy streets of that city as England is at war with France. Jonathan Absey of the Home Office is charged with tracking down spies. He attempts to soldier on but he is also consumed by the still unsolved murder of his 15-year-old daughter. There have been a number of killings - all young red haired ladies of the night. As Absey seeks a murderer he comes upon a strange band of astronomers, the Company of Titius. This group is looking for a star. Is their search intertwined with Absey's investigation? Elizabeth Redfern shows great promise as a writer, smoothly blending history and a breakneck thriller plot. Tim Curry excels in his reading.

One of the best historical thrillers I have ever read

Published by Thriftbooks.com User , 21 years ago
By 1795 the impact of the French Revolution is being felt in all ways of life across the Channel, but especially among the Ton. England and France are at war, so the Home Office suspects the numerous exiles of conducting espionage in support of either Napoleon or a restoration. Home Office Agent John Absey earns a living searching for spies, but has little interest in his work except for applying his skills and experience on a personal matter. John is obsessed with uncovering the killer of his runaway teenage daughter. He soon discovers two similar murders. Evidence points towards the Company of Titius astronomers who claim they seek the missing orb between Mars and Jupiter. John forces his half-brother to help gain him entrance to the group. John soon begins to find a planet load of suspects, who might be using celestial numbers to transmit coded messages to France and who could also be hiding a serial killer among them. THE MUSIC OF SPHERES is an exciting Regency tale that contains a strong who-one-it and an even more powerful espionage subplot that deftly merge into a fantastic historic fiction. The story line provides layers of insight into the era, especially the rising interest in astronomy and the relationship between the English aristocracy and the French émigrés. John is an engaging character filled with guilt over his daughter, but uses guilt as a weapon to gain what he wants. Though at times the reader will feel they are drowning in the depths, Elizabeth Redfern has written a terrific tale that will delight cross genres fans.Harriet Klausner

Published by Thriftbooks.com User , 21 years ago
This is definitely the best historical murder mystery novel that I've read so far this year. The plot is an intriguing and fascinating one, and Elizabeth Redfern's prose style is crisp and colourful -- her descriptions of England in the late 18th century is so gothically atmospheric! Carefully plotted and tightly paced, I found myself simply unable to put this book down until I reached the conclusion of this spellbinding novel.The events of this mystery take place during the summer months of 1795. The French Republican army is making mincemeat of the European forces that have gone up against it so far (England included), and espionage seems to be the game of the day. Indeed, the consensus at the Home Office is that England must be overrun with French spies right now as the French army seems to be incredibly well informed as to English troop dispositions. The natural suspects are of course the emigres that fled from France in order to avoid the bloody retribution of the Revolution, and it is the job of Jonathan Absey to track down such spies. However Jonathan has another obsession of his own that keeps him up at night and that is affecting his work: three years ago, Jonathan's runaway daughter was found strangled to death, and Jonathan has never given up hope of hunting down her murderer and making him pay. One night, after having spent a few fruitless hours keeping an eye on a group of emigres at a tavern, Jonathan learns that another young redheaded woman has been strangled in a manner similar to that of his daughter's. Further investigation unearths the fact that there have been several other such murders -- all young women, all redheaded, and all killed in exactly the same way. Surely this is the work of his daughter's murderer?Jonathan's investigations lead him to the fascinating and mysterious de Montpellier siblings, Auguste and Guy; and to an astrological club, the Company of Titius. Here, however Jonathan meets with a dead end -- how to approach the de Montpelliers without raising suspicions? And then he remembers his estranged elder brother, Alexander, who like de Montpelliers, is also an amateur astronomer. Jonathan forces Alexander to make contact with the de Montpelliers and to spy on them for him. In the meantime, Jonathan tries to discover more about the de Montpelliers and their strange household, but someone in the Home Office seems to be protecting them, and Jonathan finds himself being increasingly sidelined to lesser duties. His only hope of discovering if the de Montpelliers are involved in the murders lies with Alexander. But can Jonathan trust his estranged brother?'"The Music of the Spheres" is an enthralling and exciting read from beginning to end. Elizabeth Redfern has done a magnificent job of bringing the politics of the late 18th century England, with all it's intrigue (both political and diplomatic), to life. The novel was spun out precisely and evenly, with no extraneous bits that could have bogged down things terrib
Trustpilot
Copyright © 2022 Thriftbooks.com Terms of Use | Privacy Policy | Do Not Sell My Personal Information | Cookie Preferences | Accessibility Statement
ThriftBooks® and the ThriftBooks® logo are registered trademarks of Thrift Books Global, LLC