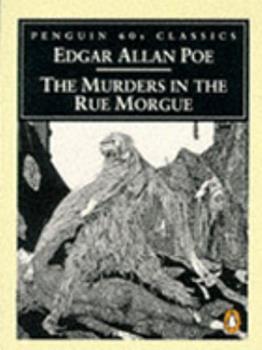 The Murders in the Rue Morgue (Classic, 60s)

This description may be from another edition of this product. Complete and unabridged edition. First published in 1841.

Published by Thriftbooks.com User , 13 years ago
A Horror Fiction Story Dupin deduces something orange. 4 out of 5

Dupin and Holmes = One in the same.

Published by Thriftbooks.com User , 17 years ago
"The Murders in the Rue Morgue" is the short story I read, but it was not from this edition. I have the Barnes & Noble Penguin 60s Classics edition, which contains only this story. While short, this story clearly has a climax, resolution, and all other fundamentals that would be expected within a novel. The two main characters are clearly fashioned like Sherlock Holmes and his deductive investigating methods (Dupin) and his at times duped companion Watson (the unnamed narrator at times). While I found the first 6 pages humdrum, since it only explained the analytical method of thinking (Dupin's way of thinking), and then Dupin's tedious soliloquies about how the murder may have been committed rather drably, the actual explanation of the crime is what caught my attention. I did expect more morbid images, since this is, in fact, Poe. An entertaining short story. I recommend.

Published by Thriftbooks.com User , 19 years ago
"The murders in the Rue Morgue" is the first of three Poe's stories featuring his famous detective, C. Auguste Dupin. The setting is Paris, and the story goes on mainly at night and in Dupin's apartments. This leaves the reader with a sense of darkness and a little claustrophobia, adding to Poe's great style. Dupin is able to solve the murders of two women by just visiting the crime scene once and thinking a lot. After reading lots of books by Conan Doyle, Maurice Leblanc, Agatha Christie and P.D. James the fact of the murders itself and the kind of solution given to them may seem a little simple, but we have to remember that this may be considered one of the first "detective stories" of all times. Conan Doyle was obviously inspired in some parts of Dupin's character and reasoning to create Sherlock Holmes. And the noir atmosphere is, as always, great. This is, appearently, not a story to be seen as "horror", but proves that Poe is one of the great authors of all time.Grade 8.6/10

Thrilling story which under estimates the power of the beast

Published by Thriftbooks.com User , 22 years ago
It was a breathe taking story which shows that even the most common person is capeable of discovering the truth behind a mysterious case.The story was the best I've read in years and should be one of the most populare stories Poe has ever writen.Not only does he leave the person reading the book amaized but, he leaves them terrified about the horrible things that life has to offer us.It just comes to show you never under estimate the power of the beast you don't of what might come.And by reading my reveiw you'll know that Poe has left another person amaised by what can happen to one when they least expect it .
Copyright © 2020 Thriftbooks.com Terms of Use | Privacy Policy | Do Not Sell My Personal Information | Accessibility Statement
ThriftBooks® and the ThriftBooks® logo are registered trademarks of Thrift Books Global, LLC