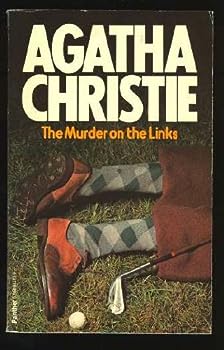 Murder on the Links

(Book #2 in the Hercule Poirot Series)

Beloved detective Hercule Poirot made his second appearance in this tale of murder, blackmail, and forbidden love. Hercule Poirot rushes to France in response to an urgent and cryptic plea from a... This description may be from another edition of this product.

Published by Jenny , 2 months ago
Copy was listed as "really good" condition with a different cover displayed and the book was in terrible shape. :(

Published by Thriftbooks.com User , 14 years ago
"Murder on the Links" was the second book Christie wrote that featured Hercule Poirot as detective. Told by his friend and sometimes fellow sleuth, Captain Hastings, the story is an immensely readable, keep-you-guessing mystery. By the end of the novel, Christie manages to weave so many twists and turns into the story you won't be quite sure which to believe. Hercule Poirot receives a letter from the millionaire Renauld, who fears for his life; but upon arriving at the rich man's villa in France, Poirot and Hastings are greeted with news of his murder. Is it possible that his death was an accident? Poirot thinks it's a possibility, but as the suspects mount and the clues continue to confuse, trying to figure out the real culprit is truly puzzling. Complicating matters are a nasty French detective named Giraud who is certain he has found the correct killer; Poirot knows he is wrong, but can he prove it? "Murder on the Links" staggers a little at first: Hastings can be a bothersome narrator at times, but once the witnesses start talking and the story becomes ever more convoluted the narrative picks up the pace and never stops. Twists are an Agatha Christie signature, especially with Hercule Poirot cases where he uses his "gray cells" to solve the mystery; but she has truly outdone herself with the denouement of "Murder on the Links", a hole-in-one in terms of enjoyment and surprise.

The Girl With Anxious Eyes

Published by Thriftbooks.com User , 14 years ago
This 1923 murder mystery provides a view of the culture of those days. Hercule Poirot received a letter from an English millionaire living in France. P.T. Renaud plead for help, he is in fear for his life. Poirot and Hastings travel by boat to Calais, then by train to the small village. When they arrive they find Renaud was murdered in the early morning. His body was found in a freshly dug open grave! The examining judge was investigating, a top detective from Paris was looking for clues (and found some). Renaud's wife described the two masked bearded men who invaded their home, tied and gagged Madame Renaud, then took Renaud outside to his death. Why did the servants hear nothing in the night? Were they too old? Poirot learns about the official investigation, and the facts from his own efforts We learn about the neighbors, those two strangers disappeared without a trace. Little is known about Renaud except he made a fortune in South America. What were his secrets? Was he involved with local neighbors? Clues are found that reference unknown people. The murder weapon was unique, formerly owned by Renaud's son Jack. Will he become the chief suspect? Various theories are offered, various facts are used to modify the theories. [I had a hunch to the mystery in Chapter 17, it was only correct as to the secret identity.] Will false confessions create confusion? There are surprises just until the mystery is solved by Poirot (Chapter 29). The last chapter ties up the loose ends. In the real world murder is usually caused by love or money (lust or greed), to get it or to keep it. This story offers not one but two murder mysteries that are solved in the end. It's a good plot, even if some parts seem incredible. What do "anxious eyes" look like? The "Sherlock Holmes" detective stories created a market for this genre. Their cessation provided opportunities for new authors. Hastings and Poirot provide an alternative for Watson and Holmes. Few have been as widely-read as the originals.

Published by Thriftbooks.com User , 18 years ago
I've recently started reading the Christie mysteries I've missed along the way, including this, her second full-length Poirot. I found it tough going at times, somewhat confusing...but I've rarely been so blown away by the denouement of a whodunit! I can only imagine that this was the book that cemented Christie's reputation after her debut with "The Mysterious Affair At Styles." Sure, the writing is old-fashioned (it was written in the late 20s, after all), but the intricacies of the plot and the way Christie keeps you off-base and guessing until the very end are simply stunning. You may not have heard of this Christie (it was new to me), but it truly ranks up there with "...Roger Ackroyd" and "...the Orient Express" for sheer suprise value.

Published by Thriftbooks.com User , 18 years ago
Another Hercule Poirot thriller with more plot twists, unusual characters, unexpected relatonships and motives than a typical Christie who-done-it. Take this one to the beach this summer and bring a scorecard to keep track of all the players. Of course, there are twins who suffer from mistaken identities, and a chance meeting of adversaries from a long ago time in a remote location. Murder on the Links actually features two murders and two detectives. Poirot is summoned to France by a wealthy businessman apparently in need of security, who turns up dead only hours before Poirot's arrival. Then another body turns up near the same golf course, but perhaps the death is due to natural causes. Then a younger detective appears, convinced that Poirot is a dottering old fool, with obsolete methods lacking the modern scientific approach. Of course, Captain Hastings (from the Affair at Styles) is back as the narrator. Unfortunately here, Hastings becomes captivated by a young nameless woman and blunders in ways injurious to the solving of the crime. Ultimately, Poirot resolves the thing and shows up the young pretender.

Murder, Romance, Mystery, and a detective that solves it all

Published by Thriftbooks.com User , 20 years ago
It all starts out with a mysteriouis letter addressed to the famous detective- Hercule Poirot. Hastings and Poirot go to France to solve a murder. Everything seems to be so simple, but Hercule Poirot proves everyone wrong. As if everything is not hard enough... as always men must go googoo for women! There is a love affair going on that may blow the whole case. Everything is so mysterious, and you don't know who the murderer is until the last page. READ IT!! You'll be surprised. It is a fabulous mystery that you just can't put down!! And just so you know, Monseuir Renauld is not who he seems... he has a very interesting past that... well I won't tell you that.
Trustpilot
Copyright © 2022 Thriftbooks.com Terms of Use | Privacy Policy | Do Not Sell or Share My Personal Information | Accessibility Statement
ThriftBooks® and the ThriftBooks® logo are registered trademarks of Thrift Books Global, LLC