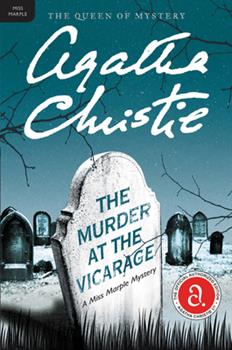 The Murder at the Vicarage: A Miss Marple Mystery

(Book #1 in the Miss Marple Series)

The Murder at the Vicarage is Agatha Christie's first mystery to feature the beloved investigator Miss Marple--as a dead body in a clergyman's study proves to the indomitable sleuth that no place, holy or otherwise, is a sanctuary from homicide. Miss Marple encounters a compelling murder mystery in the sleepy little village of St. Mary Mead, where under the seemingly peaceful exterior of an English country village lurks intrigue, guilt, deception...

The best Agatha Christie of all....

Published by AME , 4 months ago
The humor and the witty turns of phrase, along with the red herrings are what make this book absolutely stellar.

Published by Melody M. , 1 year ago
So many little things made me giggle as I read this delightful story. The many characters in the not-so-sleepy village of St. Mary Meade were fun and had me wondering who did it. No one liked old Colonel Protheroe but when he turns up dead, an interesting investigation begins. I loved the vicar, Rev. Leonard Clement, who narrates the story and his young wife, Griselda. The spinster, Jane Marple, observes many details of human behavior and teases out the intertwined events to find the murderer. I like it so much, I've just ordered more Agatha Christie books. I recommend to anyone who loves a good classic cozy mystery.

Published by Thriftbooks.com User , 16 years ago
It's no secret that no one in St. Mary Mead likes Colonel Protheroe. He is strict, somber, and by the numbers. But when the vicar returns home late for a meeting, he's surprised to find Colonel Protheroe shot through the head. The local police are called in and two people confess. Yet something doesn't seem quite right. Fortunately, Miss Marple lives next door. With her sharp mind talent for learning gossip, she just might make sense of everything that's happening. Ok, I confess. I love a good cozy mystery but have yet to read much Christie. I can tell I need to change that. This book had me confused from the get go. There were so many red herrings it was hard to tell what was really happening. Yet it all came together at the end in a logical conclusion. I checked this audio version out of the local library for a trip and only after listening to it discovered that it was abridged. While disappointed, I never would have noticed. It was expertly cut, and everything was there I need to enjoy the story. Ian Masters did a great job of bring the characters and story to life. Agatha Christie is a class mystery writer for a reason. Anyone who loves a good puzzle with a surprising conclusion will love this book.

Published by Thriftbooks.com User , 17 years ago
This is the first Miss Marple stories and set the stage for the rest of the series. Miss Jane Marple is an elderly spinster of modest means,a life-long resident of the tiny village of St. Mary Mead, an advid gardener and bird watcher and a most astute observer of human nature. Many of the residents and visitors of St. Mary Mead that will return in later works are introduced here, the gentle vicar and his lively younger wife, Raymond West, Jane's novelist nephew and others. The story is told by the vicar and gives us many insights into his homelife. Col. Protheroe is found murdered in the vicarage, much to the delight of his wife and daughter and embarrassment of the vicar. As the local police try to solve the crime it become apparent that Col. Protheroe was not going to be missed and that nobody really had an alibi. As the investigation progresses it seems that more questions are raised than answered. Ultimately it is Miss Marple who resolves the issues of love affairs, mysterious strangers, and assorted lies to uncover the true culprit.This is a perfect gem, Christie at her best. The characters are well written and the descriptions of the lack of privacy in a small are incredibly accurate and a recurring theme of Christie's. In typical Christie style of the rules of detection are flirted with but the clues are fairly laid out for the reader to follow, if they can be separated from the red herrings.

Published by Thriftbooks.com User , 20 years ago
"The Murder at the Vicarage" is memorable because it introduces the delightful Miss Jane Marple. With her love of gardening, binoculars for bird-watching close-at-hand, and an uncanny ability to find similarities between the present situation and her past experiences and acquaintances, Miss Marple is introduced in her home village of St. Mary Mead. We will return here many times and reacquaint ourselves with the characters introduced in this mystery---the vicar Leonard Clement and his wife Griselda, Mrs. Price Ridley, Colonel Melchett, Dr. Haydock, and others. The murder victim, Colonel Protheroe, is a hateful man disliked by everyone he had dealings with. Therefore, the list of suspects is much longer than usual. There is the victim's second wife, the visiting artist she loves, a mysterious lady with the telling name of Mrs. Lestrange, a teenage daughter, an archaeologist, and a secretary. There are plenty of red herrings in this one and it is up to Miss Marple to reveal if the most likely suspect is also the guilty one in this cozy read for those of us who thrive on evil in small village life.

ANOTHER SUPERB JOB OF DAME AGATHA

Published by Thriftbooks.com User , 20 years ago
Ms.Marple did it again!. This time, our favourite detective had to deal with a murder in her own village, St.Mary Mead. The victim, Colonel Protheroe, was not a very nice person, so his death almost acceptable to everyone in the village. There's a widow, a daughter, and a mysterious lady from his past, plus a number of people who had a very strong motive to do the murder. But once again Ms.Marple discovered the real murderer with her own old-way. The basic idea of this story is not very special, but the plot is. We'll get some laughs as usual and a satisfaction in the end. Two thumbs up for Agatha Christie!!

Published by Thriftbooks.com User , 23 years ago
this novel was very good. agatha did a good job of intertwining all the details. good job. agatha. i love you????

Murder at the Vicarage Mentions in Our Blog