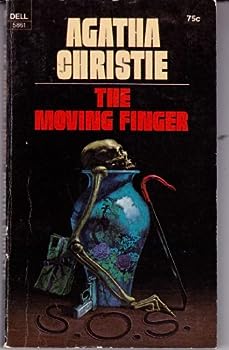 (Book #4 in the Miss Marple Series)

While Jerry Burton (the narrator of the story) recovers from an airplane accident, he and other residents of a quiet English village receive vile anonymous letters. When a murder occurs, Miss Marple steps into save the day. Unabridged.

Published by Thriftbooks.com User , 13 years ago
What "improvements" have been made for the Black Dog & Leventhal edition? There are already major differences in punctuation, word choices, and scene breaks between the original Collins and Dodd Mead editions of this novel. There are further differences between the Dodd Mead editions republished by Random House/Avenel and the Dodd Mead editions republished by Simon & Shuster/Pocket. There are further additions still in the Signet, Bantam, and Berkley editions. For every publishing house putting out her works, there seem to be a new batch of editors altering Agatha Christie's words and the sound of her voice. What's the matter with these publishers? Whose voice do they think we want to hear when we sit down to a novel by Agatha Christie? And what will she sound like twenty years from now? It's frightening that her estate has failed to see the importance of guarding her words as she wrote them. Please tell me I'm not the only one here who senses that a crime has been committed.

Published by Thriftbooks.com User , 14 years ago
A young man and his sister from London rent a house in a country town so he can recover from his injuries. Shortly after arriving, they receive an anonymous letter accusing them of not really being siblings. They soon find out that people all over town have been receiving such letters. This leads to two deaths. The detectives, this man and his sister do most of the sleuthing. Toward the very end of the book, the vicar's wife calls in Miss Marple who is able to put the final pieces together. Agatha Christie usally "gets me" about half the time (as far as guessing, "who done it,"), and she got me on this one! A pleasant read.

Published by Thriftbooks.com User , 16 years ago
The use of anonymous letters is a plot device that used to be more popular in detective fiction than it is now. Other Christie mysteries used the idea of the anonymous letter (such as MURDER ON THE LINKS, one of the early Poirots.) THE MOVING FINGER is the culmination of Christie's thinking about this topic. Other Golden Age novels with this device include Carter Dickson's spooky NIGHT AT THE MOCKING WIDOW and, less successfully, Ellery Queen's THE SCARLET LETTERS. Clouzot's film LE CORBEAU, written around the same time as THE MOVIGN FINGER, is a wonderfully atmospheric thriller, and it has an American remake too. I suppose they're still making films about the anonymous letter, only now they're anonymous phone calls (like WHEN A STRANGER CALLS or even the "Scream" trilogy.) Jerry Burton's a bit of a headcsse after seeing action with the RAF and doctors have ordered him to seek surcease from war in sleepy little Lymstock, where nothing has been known to happen for years, and the War seems very far away. With him as his nurse is his sister Joanna, a sophisticated young thing out of an Evelyn Waugh novel but a woman with a heart of gold and an eye for strays. Together the Burtons meet up with their fair share of village characters, most of them very well bred. The doctor, the lawyer, the minister, the banker and their wives and families. One among them, however, is an insanely calculating killer, and many villagers are receiving obscene anonymous letters which puts the whole village on edge. Meanwhile, Jerry is seeing quite a bit of a young girl, Megan Hunter, who's quite a tomboy in manner, and seeing as though she just got out of school she's awfully young, but then again I suppose Jerry is pretty young too. Otherwise when you read about the romance that develops between Jerry and Megan there is a bit of pedophilia creeping in, or so it seems to modern eyes. Joanna finds her own romance with the town's kindly doctor, who hasn't seen a woman quite like Joanna, even up North. The mystery is a corker. I've read the book several times and I can never guess who it is! Another thing that always surprises me is the (very late) entrance of Miss Marple. Once Marple gets to Lymstock, the book becomes a more or less conventional Miss Marple novel. I almost wish that Agatha Christie had left her out of the book entirely, for the story is so strong that Marple is very nearly a distraction!

Published by Thriftbooks.com User , 17 years ago
I read almost all of Christie's books at one point 4 or 5 years ago. One of the last I hit upon was "The Moving Finger", and it turned out to be my favorite Christie mystery. I loved the main narrator - Jerry Burton; his neurosis, wit, simplistic arrogance and ultimately good heart were so novel to me, especially in a murder mystery. He was a breath of fresh air from the likes of Miss Marple and Poirot.These many years later, I picked up the title again to see what I thought. I see now that the narrator reminds me in some ways of Grimes' main characters for her murder mysteries - intelligent, reserved, seemingly aloof, somewhat cynical, and ultimately kind bachelors written by females authors. Apparently I find this character irresistable as I love all of Grimes' work.However, in going back and rereading some Grimes and some Christie, I am noticing how different their styles are. While I read Grimes' books the first time only 2 or 3 years ago, I find I can't remember the solution to her mysteries when I reread them because she buries her clues below a rich surface of character development. Christie, on the other hand, doesn't ever wander far from her murder mystery plot - no matter how much she may twist and turn it; and as soon as I started into this book I thought, "Oh, ______ did it". Even so, I enjoyed reading this little gem again.That all said, in addition to having a neurotic narrator - which you may or may not enjoy - this mystery focuses on the reactions in a small country village as racy anonymous letters are received by everyone in town. Jerry Burton, the narrator, and his sister arrive from London for some needed R & R right about when these letters start becoming known and so are drawn in to the town's little scandal.While Christie expounds on the psychology of those who write such notes, you have to watch all the details of the case. Like the murderer, Christie is masterful at getting you to focus on the wrong things...and then surprising you with the obvious solution. Very well done and a tribute to her uncanny gift of creating puzzles and then solving them for you.

Published by Thriftbooks.com User , 20 years ago
This story is told by Jerry Burton, an RAF flyer recovering from a crash. He has been sent to the village of Lymstock to get rest and quiet. Accompanied by his sister Joanna, Jerry soon finds that all is not as peaceful as he might have hoped. A series of poison pen letters detailing the explicit and often illicit facts of the residents' lives is causing quite a stir. The fear escalates when an apparent suicide is followed by a murder. With so much wickedness abounding, the vicar's wife calls in her old friend Jane Marple, whom she considers an expert on wickedness in village life.This book is notable for its excellent characterizations. From the community-minded doctor's sister, to the charming spinster who rents the Burtons her home, to the dazzling governess of the lawyer's young boys, Mrs. Christie gives us a village filled with quirky and interesting people. Most notable is Megan Hunter, perhaps her finest young girl protagonist, who is transformed from the dowdy stepdaughter to an exquisite Cinderella. The narrative style is light and entertaining, the romance sweet, and the murder quite deadly in this fun and always ingenuous offering from the mistress of mystery. Mrs. Christie herself recalls this story in her autobiography as a personal favorite that has stood the test of time. As charming as it no doubt was when first published in 1943, The Moving Finger is a most satisfying read.
Copyright © 2020 Thriftbooks.com Terms of Use | Privacy Policy | Do Not Sell My Personal Information | Accessibility Statement
ThriftBooks® and the ThriftBooks® logo are registered trademarks of Thrift Books Global, LLC