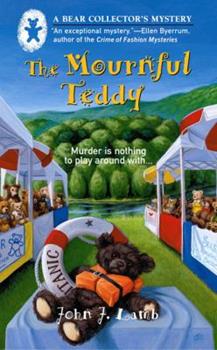 (Book #1 in the A Bear Collector's Mystery Series)

Retired San Francisco cop Brad Lyon is settling into a quieter life with his wife, Ashleigh, in Virginia's mountain country, where they collect and create teddy bears. But even here, stuff happens...... This description may be from another edition of this product.

Published by Thriftbooks.com User , 15 years ago
Bradley recently retired as a homicide inspector, and moved from California back home to Virginia. He and his wife, Ashleigh, love teddy bears, and they even make them. I agree with the good, positive things Bradley says on page 45 (of the paperback version) about teddy bears. What he says is summed up in the last sentence on the page "I'm convinced there is something almost supernatural about the bears' soothing effects on people". A body is found in the river; the mourning bear is missing. Bradley is determined to solve the mystery of the body, and to find out if it is related to the missing mourning bear. Even though he is now a civilian, his many years of homicide inspecting gives him the experience and knowledge to be able to solve this mystery. I admire the love and wonderful relationship that Bradley and his wife have; and Deputy Tina rocks. I can't wait to read the next teddy bear mystery in this series.

Go to Bed with a Teddy Bear

Published by Thriftbooks.com User , 15 years ago
It's such a pleasure to start a brand new series with a great Cozy. What's not to like here? Brad Lyon is an ex-homicide detective retired from the San Francisco PD because of a gun shot injury that left him slightly crippled. He and his wife recently moved back to her hometown of Remmelkemp, Virginia, a town with a some interesting characters. Ashleigh Lyon has a small but promising business designing, sewing and selling teddy bears and Brad is only to happy to help his adored wife as her chief PR guy and right hand man. Brad is beginning to adjust to small town life, the peace and quiet, the slower pace and southern accents of Remmelkimp. Out walking their dog one morning, he discovers a body in the river near their home just as he and Ashleigh are getting ready to leave for the Shenandoah Valley Teddy Bear Extravaganza where Ashleigh hopes to sell some of her teddies. He naturally contacts the local law officers and while discussing the case with them, Brad realizes that they seem very eager to dismiss the death as a suicide when it is obvious that it's murder. Old habits die hard, and investigating homicides is one habit that Brand has not given up. Brad and Ashleigh are soon drawn into the murder mystery which also rapidly becomes a Teddy Bear mystery as well. The disappearance of the famous and valuable bear known as the Mourning Bear is thrown into the mix. And mix it is: the corrupt sheriff and his steroid crazed deputy son, Brad's good friend, Sergei, a retired Russian spy, as well as the owner of local hangout Pinckney's Brick Pit, single mother and honest cop, Deputy Barron, who is running for Sheriff, his bear-loving helpful wife and Brad himself, who is determined to bring justice to the Remmelkemp Mill area, and find out exactly what crooked business is taking place in the town. However, as Brad gets closer to solving the case, he wonders whether he and Ashleigh will end up in the river as well. The author's own homicide detective experience makes for authentic details and lends great crdibility to the character of Brad. There is also a lot of information about teddy bears and the people who design and collect them. A great addition to the book is the lovely description of rural Virginia and all the Civil War historical reenactments in that beautiful state. All in all, this is the start of what I hope will be a great cozy series.

No Reason to Mourn. This is a Great Debut

Published by Thriftbooks.com User , 15 years ago
Brad Lyon enjoyed his life as a SFPD cop until he was shot in the line of duty. But being forced to retire early has its perks. He and his wife Ashleigh have moved across the country to Virginia and they have begun to indulge in their hobby of teddy bear collecting and making. They are planning on exhibiting at the Shenandoah Valley Teddy Bear Extravaganza, and one of Ashleigh's designs has a chance of winning the design contest. But the day of the event gets off to a poor start. Brad finds a man floating face down in the Shenandoah River. His trained eye immediately spots the signs that the man was strangled before being dumped in the river. However, the sheriff refuses to classify the death as anything other then an accident. Meanwhile, the teddy bear show is going well. The highlight of the event is supposed to be a charity auction of a collectable Mournful Teddy. However, the bear never makes it to the event. Are the two connected? What will Brad find when he takes the investigation into his own hands? The book starts very slowly with too much character information dumped into the first chapter. However, things quickly pick up with the discovery of the body. I was hooked from that moment forward. The story moves fast with lots of suspense. It's an interesting mix of police procedural and cozy, but it works well. The characters are well developed, and I especially loved Brad and Ashleigh. Their relationship is sweet. Brad also has a wonderful sense of sarcasm that adds lots of fun to the story. The book sounded promising from the cover, and it exceeded my hopes. I am looking forward to the next book in what promises to be a fun series.

A Teddy Bear with Teeth

Published by Thriftbooks.com User , 16 years ago
Let me disclose my prejudice right up front: I'm a guy. Just based on the cover of this book, I would not normally have given it a second look. It's nothing against teddy bears; they just don't interest me. But because I read Mr. Lamb's first novel (and found it to be worth reading) and because I was able to meet the man at a book signing last year (and found him to be very friendly and happy to chat with me at length about book-related things), I preordered this book and started reading it as soon as it came. Don't let the cover fool you. There is nothing soft and cuddly about this mystery. Almost from the first chapter, there's a palpable sense of danger and impending disaster looming over a main character (that you really do care about) that compels you to keep turning the pages until you've finished the thing. This novel is full of delightfully sleazy bad guys, plot twists and surprises, and an accurate, detailed depiction of police and detective work that stays interesting and never becomes pedantic. It's a very satisfying read. And yes, there are teddy bears. I'm sure teddy bear fans will be delighted; for those, like me, who are more or less indifferent to teddy bears, their presence in the novel certainly didn't detract from the experience. All in all, a great second offering from an obviously hard-working new novelist.
Trustpilot
Copyright © 2022 Thriftbooks.com Terms of Use | Privacy Policy | Do Not Sell or Share My Personal Information | Accessibility Statement
ThriftBooks® and the ThriftBooks® logo are registered trademarks of Thrift Books Global, LLC