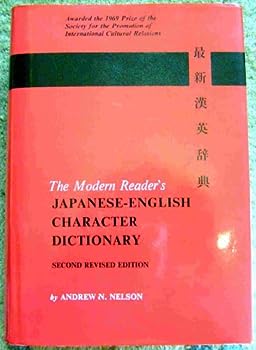 By scholarly consensus - 'the first really practical, completely up-to-date, and authoritative dictionary in its field...a genuine boon to all English-speaking students of written Japanese...' This description may be from another edition of this product.

Published by Thriftbooks.com User , 13 years ago
I have been using this dictionary since 1965. I'm not a scholar of the Japanese language, just an occasional user. While I can't say it's easy, I almost always find what I'm looking for. I don't know how the book could be improved.

Published by Thriftbooks.com User , 15 years ago
Learn Andrew Nelson's original radical priority system and spare yourself the added bulk and confusion of the New Nelson's Universal Radical Index. Dr. Nelson created an elegant and efficient lookup system that, with a little bit of practice, is without a doubt the easiest way to look up kanji while reading. There's simply no need for the extra 200-300 pages that the New Nelson's tacks on with the URI. Do keep in mind, however, that this is primarily a dictionary for reading, and will not assist the user with English-Japanese lookup.

The original is the best...

Published by Thriftbooks.com User , 18 years ago
Don't buy into those "New Nelson" editions. This is the book you want for your kanji references. Excellent resource.

Published by Thriftbooks.com User , 21 years ago
I believe "The Modern Reader's Japanese - English Character Dictionary" by Andrew Nathaniel Nelson is the best character dictionary available for Japanese readers of intermediate/advanced level. In particular for anybody with a great deal of Japanese reading to do, this dictionary excels.Some debate has arisen over the construction of the book, since it departs from the "traditional" method of classifying characters and adopts a completely systematic approach.Traditionally the sub-character, or radical, by which a kanji character is classified is determined by the meaning of the radical and the meaning of the whole kanji, thus if one knows the basic meaning of the radical and can guess the meaning of the kanji by it's context you are able to choose fairly accurately which radical a kanji character is listed under. (Please note this is an inexact science, Japanese themselves are not _always_ able to find a character by this method the first try) Having tried this method, I can say with confidence that although it is possible to find characters with perhaps 70% accuracy for an intermediate level reader in order to find characters with anything approaching 100% accuracy you virtually need to become a scholar in kanji construction and radical meanings. (As was mentioned in a review by Sebastien-Jerome, "the traditional system fixed by the [Chinese] Kangxi dictionary" is the basis of all such dictionaries. Thus if you don't have a knowledge of this system you are in trouble ;-)OK... So how is this dictionary any different? Andrew N. Nelson was a scholar of the Japanese written system (a missionary to Japan, I believe) and he felt, since there is debate even among Japanese as to the correct organisation of a character dictionary, that a systematic approach to character organisation was the most logical step and provided a good way of finding characters for all the non-scholars. This he proceeded to do. He compiled one of the most comprehensive listings of Kanji and compounds available to non-Japanese at the time (or to date) and then proceeded to place them in the logical order of first radical found in an arbitrary but logically ordered system: is it a radical? no, is it enclosure? no, start from an arbitrary point (he chose the top left or "North-West" corner) and rotate around the character looking for the radical (ie next North, North-East, East etc.) With the end result that, once you learnt his arbitrary system, any person, scholar or no, could find their desired character on the first try. (or in other words with 100% accuracy.) This is a most amazing development, considering even Japanese people with their current dictionaries cannot _always_ find their desired character on the first try. Of course as with any profound paradigm shift many people argued and argue that it is "stepping away from the original system", but there is no one standard for Kanji radical groupings so, on this grounds, Nelson's choic

Published by Thriftbooks.com User , 22 years ago
This is THE kanji dictionary for any serious student of Japanese. Years after buying this dictionary in college, I still use it when other dictionaries do not have an entry for the exact combination of characters. It's big, it's heavy, but it is definitely the best when other carry-around dictionaries fall short.
Copyright © 2022 Thriftbooks.com Terms of Use | Privacy Policy | Do Not Sell My Personal Information | Accessibility Statement
ThriftBooks® and the ThriftBooks® logo are registered trademarks of Thrift Books Global, LLC