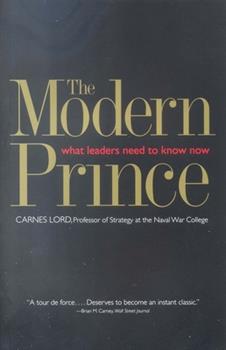 The Modern Prince: What Leaders Need to Know Now

An eminent political scientist and government official here offers witty and trenchant counsel on what leaders need to know in order to be effective--how to deal with war and crises, diplomacy, secret intelligence, political advisors, the media, and more."A tour de force. . . . Lord's understanding of the workings of government, both ancient and modern, is profound, and his ability to assimilate the two, makes The Modern Prince indispensable. . ...

Complements "The Prince" and Uses It Wisely (Among Other Issues).

Published by Thriftbooks.com User , 15 years ago
Author Carnes Lord has created a text that complements, but does not compete with, Machiavelli's most famous treatise "The Prince." Lord offers advice to, ostensibly, men and women in positions of global leadership. However, this advice can and should be easily tailored to meet the needs of every politician, military officer, law enforcement executive, and business CEO. On page 208, for example, Lord illustrates Machiavelli's answer to the question of whether caution or impetuosity is a more valuable quality in leaders. With that said, Lord, in acknowledging that a contemporary leader (in particular, the United States President) having access to the use of the modern invention of executive power, most likely will have to follow the Machiavellian model: "the deep message is that princes cannot afford to follow cautious or passive courses because the world is more easily shaped to human purposes than hitherto believed. Energetic leaders project an image of strength that overawes and impresses, that succeeds by its own success." He contends that this is based more upon and is evidenced more so by the free enterprise style of leadership in the business world, however it has its roots deeply planted in "proper" politics. With the belief that every leader can benefit from the gold nuggets of observation and advice offered between the pages I rate this text at five stars. JP

A Map of the Modern Political Landscape

Published by Thriftbooks.com User , 17 years ago
"The Modern Prince" is not what I had expected, but it provides something equally valuable. I would not call "The Modern Prince" a handbook in the sense of Machiavelli's original. The fact is, it spells out hardly any real answers for dealing with the complicated problems of contemporary governing. I had hoped to find something comparable to Machiavelli, a handbook that would impart sage advice for the modern statesman. But Carnes Lord is not Machiavelli's successor. If you want a handbook filled with little nuggets of wisdom, turn to Machiavelli's original or to Marcus Aurelius. What Carnes Lord has created instead is a map of the political landscape in today's advanced democracies. In each chapter, he gives competent analysis of the various features of that landscape, including the media, the military, intelligence agencies, the economy, and the class of people he calls "the elites". Each of these has their place, and each can be manipulated to serve the policy goals of the leader. But he reminds us that they can also become obstacles if not supervised or managed adequately. They are tools that can work for you or against you. That is his main point, and it's an important one to understand. The trouble is that Lord does little to explain HOW to make them work for you. This is what I had hoped to find here. But perhaps the answers are too complex to fit into a layman's guide to government. Yes, I've said that it isn't the handbook I expected. Yes, I've said that it raises more questions than answers. And I haven't even mentioned that it's littered with a whole bunch of the author's personal right-wing prejudices. But stil I give it four stars. Why? Because at the end of the day, I realized that it had given me something equally enriching: exposure to the realist school of politics. It's easy to fight for lofty ideals; but how do you bring those ideals down into the dirt, into this imperfect world, full of people with conflicting ideas and agendas? That's a much more important question. In short, this book has given me new appreciation for what defines a competent statesman. I feel that from now on, my vote shall reflect an opinion that is not just more educated, but also better-educated.

Incisive and surprising treatment of leadership

Published by Thriftbooks.com User , 17 years ago
This book is among the most incisive interpretations of leadership in modern times. To say more is to say less.

Published by Thriftbooks.com User , 17 years ago
I am generally averse to rating a book with five stars. This book is an exception to the rule. The author is a distinguished policy advisor and academic who has served in two American Presidential administrations, and who brings an incredible clarity to the study of political leadership. Eschewing modern political science as in "fundamental disarry" and incapable of providing a coherent theory of politics, Lord turns to observation of American political history and more recent world history for an analysis of what he calls "statecraft" in action. The book then proceeds through a logical progression of chapters from "Why leadership is still possible" to "An exhortation to preserve democracy from the barbarians." Throughout, Lord manages to emulate the style of Machiavelli's original work, but bring to it a broad philosophical analysis which shows the breadth of his own intellectual powers. For someone looking for a book on real politics and leadership without the self-obsession of most modern political science, this is an outstanding read.

Published by Thriftbooks.com User , 19 years ago
What if someone was able to go back into The Prince, the timeless book of advice to politicians written in 1500's about the rule of the Medici family in Florence, Italy, and insert examples of modern day leaders and nations for the city-states, princes, and rulers described by Niccolo Machiavelli? As author Carnes Lords writes in the beginning of his book: 'The theory of democracy tells us that the people rule. In practice, we have leaders who rule the people in a manner not altogether different from the princes and potentates of times past.' There are many superficial pop books on the implications of Machiavelli's thought on management, business, war, and politics. Carnes Lords has written a readable work of depth that is a potential modern classic focused around the problem of executive decision-making and America's role in the world. Like Machiavelli, Lords covers a broad range of contemporary leaders from Singapores's Lee Kuan Yew, Japan's Nakasone and Tanaka, the former USSR's Boris Yeltsin, and Britain's Margarent Thatcher along with such class thinkers as Alexander Hamilton, Aristotle, and Tocqueville, and of course, Machiavelli is cited throughout. Unlike Machiavelli however, largely absent from the book is advice on how to manipulate the public. Lords worked for the National Security Council for President Reagan and for national security affairs in the H.Bush, Sr. administration. In Machiavellian fashion however(beware of those who flatter you), the book does not languish partisan praise on these leaders. Lords is critical of the mass media as an unelected fourth estate, academic political scientists, and instant gratification leaders unwilling to disadvantage anyone. Highly recommended.
Trustpilot
Copyright © 2022 Thriftbooks.com Terms of Use | Privacy Policy | Do Not Sell or Share My Personal Information | Accessibility Statement
ThriftBooks® and the ThriftBooks® logo are registered trademarks of Thrift Books Global, LLC