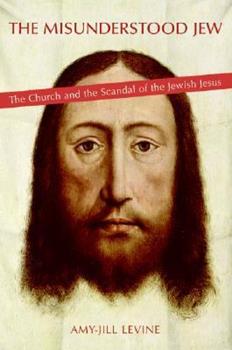 The Misunderstood Jew: The Church and the Scandal of the Jewish Jesus

Country Western singer Kinky Friedman often performs a song entitled "They Ain't Making Jews Like Jesus Anymore," and New Testament professor AmyJill Levine would agree. In fact, her career is dedicated to helping Christians and Jews understand the Jewishness of Jesus, thereby deepening the understanding of him, and facilitating greater interfaith dialogue. In this book, she shows how liberal Christians misunderstand Judaism, misunderstand the New...

Must reading for any thoughtful Christian - or Jew

Published by Thriftbooks.com User , 14 years ago
Prof. Amy-Jill Levine is a Jewish woman who attends an orthodox synagogue in Nashville and who occupies an endowed chair of New Testament studies at Vanderbilt Divinity School. If you make a habit of watching the various Jesus TV shows that appear around Christmastime and Easter, you've probably seen her on camera. A-J, as her students call her (I was her student for my M.Div., and still consider myself such) is an engaging lecturer with an appealing sense of humor and a simply awesome command of the various themes, facts and passages of the New Testament. And she treats the New Testament a lot better than many Christian professors, clergy and laity treat the Old Testament. Which brings me to her latest book, The Misunderstood Jew: The Church and the Scandal of the Jewish Jesus. It is precisely, I think, because of A-J's deep appreciation of Jesus as a specifically Jewish man, and the plainly Jewish character of the New Testament, that leads her to describe and rebut Christians' historic and ongoing habit of thinking of Jesus as some kind of "counter-Jew" who sought to radically change his own religious traditions and teachings or even overturn them. Even worse has been the use of the New Testament by Christians to justify anti-Judaism, which is a very short step from anti-Jew; neither position is simply tenable with the identity and life of Jesus. This book is not another bewailing of how Christian Germany came to commit the Holocaust. In fact, the Shoah gets only a very brief mention in her book. A-J isn't writing to point the finger at Christians for our sins. She simply wishes to introduce the reader to the Jewish ordinariness of Jesus himself and of his place and time. Just as importantly, A-J explains simply and thoroughly the errors of both the Church and the Academy in drawing conclusions about presumed monolithic Judaism; both blocs have generally supposed that whatever Jesus seemed to oppose must have been normative in Judaism of his day. That is, clergy and scholars alike haven't studied Judaica to speak of, but nonetheless think that the New Testament describes Judaism both accurately and exhaustively. It just is not so. As well, A-J exposes how modern theological fads (liberationism, feminism and many others), have so idealized Jesus away from his personal Jewishness that he becomes a heroic figure exemplifying whatever the faddists a priori wish him to be. Jesus' own people then become the paradigm for whomever the faddists wish to oppose in the present day, and the dysfunctions and injustices of today - whether patriarchy, colonialism, or various exploitations - are retrojected as the norm of first-century Judaism. Jews are then portrayed, sometimes explicitly, as domineering oppressors of class, gender, the outcast and the marginalized. Hence, in seeking to identify Jesus with the Palestinian cause today, one liberationist makes explicit an identity across two millennia between the Israeli "occupiers" of the West Bank and the J

Published by Thriftbooks.com User , 14 years ago
This is the best book available today about the Jewishness of Jesus. Amy Jill Levine points out that many of the Gospel stories would hit home with more of us if we read the New Testament with the eyes of a first century Jewish person. She points out the Jewishness of each line of the Lord's Prayer and its similarities with the Mourner's Kaddish in Judaism. She also shows that the parable of the Good Samaritan will be more powerful when we realize that the role model of the story is the enemy of the Jews. Similarly, the parable of the tax collector and the self-righteous Pharisee praying in the temple has a bigger punch when we remember how despised tax collectors were and how unlikely it would seem that a sinful, self-centered tax collector would repent and turn to the Jewish God. There is also an important chapter about anti-Judaism in the New Testament. Levine feels that the issue of whether or not there is anti-Judaism in the NT cannot be decided by the historian, but by the individual. Some will see it in the text, some won't. I wanted to argue at this point. I wanted to say "What about authorial intent? Can't we study the salient passages in their contexts to see if the authors intended an anti-Jewish polemic?" But Levine would rightfully note that we all have different reactions to what we read. Even though she rejects this notion, I still see it as a family disagreement. There is also an important chapter about the dangers of stereotyping Judaism. Levine notes that when we preach the gospels, we talk about the harsh legalism of the Pharisees, the strain of women under the law of Moses, the idea that the Jewish people rejected Jesus because he wasn't a warrior messiah, the idea that the Jewish people were obsessed with the idea of keeping pure from outsiders, and the impossibility of keeping the law of Moses. Levine points out that these are stereotypes, this is NOT the way the Jewish people looked at their lives. Levine also calls for true interfaith dialogue. This means avoiding statements like "All Jews think ..." or "All Christians think ...." It also means recognizing that both Jewish and Christian traditions have texts that might rub the other dialogue partner the wrong way. Levine counsels us to speak out when someone makes a derogatory comment about Jewish people or Christian people. There is no room for hate at the table of faith. I agree. And yet there is a clear message in the New Testament that Jesus Christ is superior to the institutions of Judaism, especially in the book of Hebrews and in certain texts from Galatians and the gospels. I think this is an important message. The Jewish writers of the New Testament were transformed by their faith in Jesus Christ. They felt so passionately about their Messiah that they even stated that faith in Him was superior to anything else Judaism could offer. As a Jewish believer in Jesus as Messiah, I wholeheartedly concur. Nevertheless, Ben Witherington is surely right when he ca

Published by Thriftbooks.com User , 14 years ago
This is a first-rate publication that takes the reader into the Jewishness of Jesus in a vivid manner while sensitive to Jewish-Christian differences. The book is both scholarly as well as pastoral for it seeks to establish common links and points of commonality between the religions. A must-read for anyone interested in Christian-Jewish dialogue today....and for understanding the outlook of much of the New Testament.

Published by Thriftbooks.com User , 15 years ago
This book is a wake up call for all Christians to no longer rely on what they have heard from the pulpit about the Jewish culture and faith during the lifetime of Jesus. The Misunderstood Jew should be required reading in every seminary. Finally a scholar breaks down the complex issues that strain Jewish/Christian relationships and provides suggestions for moving forward with intelligent dignity for both backgrounds of faith. Probably the most important religious book of this decade.

Different approach to Jewishness of Jesus

Published by Thriftbooks.com User , 15 years ago
I have heard the author in her programs published by the Teaching Company's Great Lecture series, and once I saw Professor Ben Witherington III's endorsement, I put this book on the top of my holiday reading list. Dr. Witherington endorses her book as "simply the best book ever written about the Jewishness of Jesus and his earliest followers." Dr. Levine's book is a different approach to this category, and I can appreciate Dr. W's generous endorsement of his friend's book. It does not, however, cover very much of the available historical information a seeker really needs to learn about the Jewishness of Jesus. It seems more like a book one should read if s/he doubts whether s/he her/himself, or Christianity, has fully understood the implications of the Jewishness of Jesus, and is interested in a detailed challenge about how thoroughly out of sight is Jesus' heritage among American Christians. I am now persuaded that even those who talk up Jesus' Jewishness have not gone far enough in understanding the implications of this historical fact. I came away from my reading with the idea that Dr. Levine's primary mission in writing this book is to confront anyone who purposely or unintentionally "divorces Jesus from Judaism, and then uses the story of Jesus to condemn all Jews." While she discusses neo-nutso-Nazis' and other hate groups, she also addresses those who are not hostile to Jews, and even well intentioned. I finished my reading frustrated over how difficult she and other academics make it to define Jews and Jewishness and especially Judaism. Any serious reader can accept the fact that Judasim was not monolithic, but it seems Levine, like other scholars, must mentally paralyze the rest of us in order for the rest of us to not hold generalized ideas about Second Temple Judaism and Jews. I also came away with the idea that Dr. Levine was so impassioned about her mission that criticism of Jews as presented in the New Testament just could not possibly have accurately reflected commonly-held or legitimate criticisms of (Second Temple) "Judaism" - I think I am supposed to understand myself as being anti-Jewish if I accept these New Testament characterizations. One thing Dr. Levine makes clear, and I believe this after reading the Dead Sea Scrolls, is that Second Temple Judaism did not believe in works justification. A compelling explanation has yet to be offered up by her or others as to the Apostle Paul's presentation of Law and Gospel, but one will come forth some day. It's just impossible to read Second Temple Jewish writings and still believe that they held to some crude form of works righteousness - this is an example of willful ignorance on the part of Christians, ranking right up there with "King James only" and the 5 cents tax on emails under consideration by Congress. My Southern Baptist pastor has reached out to our local Jewish community. I hope to give him a copy of this book, and I hope he will read it then in turn pass it on to hi
Trustpilot
Copyright © 2022 Thriftbooks.com Terms of Use | Privacy Policy | Do Not Sell or Share My Personal Information | Accessibility Statement
ThriftBooks® and the ThriftBooks® logo are registered trademarks of Thrift Books Global, LLC